Vaccines against meningococcus for children 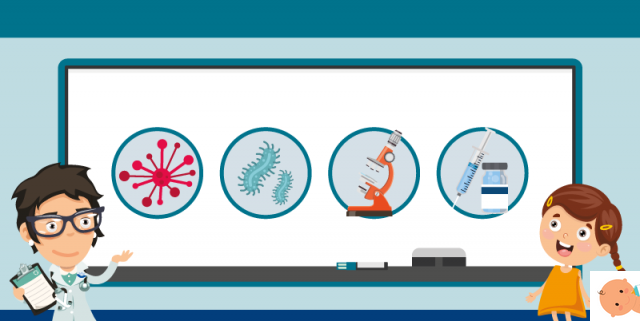 Meningitis is acute inflammation of the meninges, the membranes that surround the brain and spinal cord. It can cause neurological symptoms that can lead, albeit rarely, to serious complications such as deafness, mental retardation and paralysis, up to death in extreme situations. It can strike at any age, but is more common under five years old - particularly in children under one year of age - between 12 and 24 years of age, and in people with weakened immune systems. Meningitis can be caused by viruses and fungi and bacteria. In the latter case, that is, in the bacterial form, the disease is rarer, but also extremely more serious. For this reason it is important to carry out vaccination in children as required by the National Vaccine Prevention Plan of the Ministry of Health.

In most cases the disease is of infectious origin and is mainly caused by viruses and bacteria. The viral form is more common, tends to heal on its own in 7-10 days, and usually has no serious consequences. There bacterial formon the other hand, it is much more serious and, if not diagnosed and treated in time, can even lead to death.

Among the bacteria responsible for meningitis in the newborn we find:

According to recently published data from the surveillance system of the Istituto Superiore di Sanità, in 2022 there were in Del Paese 189 cases of meningococcal meningitis. In 2022 and 2022, 170 and 197 were reported respectively.

It is therefore not a very widespread disease, however it is about a severe infection, with a rapid evolution, a mortality of 10-15% (usually due to sepsis or septicemia), and a risk of 11-19% of serious complications, such as mental retardation, diseases of the nervous system, deafness, disorders of the sphere psychoaffective.

One is possible antibiotic therapy intravenously, but timely diagnosis is essential for it to be effective, which is not always possible. And there are cases that experience negative outcomes even if therapy is initiated promptly. The antibiotic, or combination of antibiotics, that your doctor selects depends on the type of bacterium that caused the infection.

#WinForMeningitis: Bebe Vio in the photos of Anne Geddes for the campaign against meningitis

A campaign to raise public awareness of meningitis. And on the importance of vaccinations. #WinForMeningitis is the slogan born on the web to spread the ...

Transmission of meningococcus occurs through nasal or pharyngeal droplets emitted by infected people or carriers of the bacterium. "There are various groups or serotypes of meningococci, but only 5, namely A, B, C, W135 and Y, are responsible for invasive meningococcal disease"explains Silvia Declich, Director of the Department of Epidemiology of Infectious Diseases of the Istituto Superiore di Sanità." The serotypes that circulate most frequently in the country and in Europe are B and C, while in Asia and Africa type A is more widespread. and in the United States there are also W135 and Y ". However, it is important to highlight that recently in our country there has been a change in the epidemiological trend that sees cases of infection with serotypes W135 and Y are increasing.

Meningococcal infections are often asymptomatic or cause inflammation of the upper respiratory tract; in severe cases, however, the bacterium can lead to meningitis or sepsis, very serious diseases whose outcomes can even be fatal.

Meningococcal meningitis can be prevented with vaccination which, as the Istituto Superiore di Sanità points out, is currently the only effective prevention tool. There are currently three types of vaccines available:

Meningococcal vaccines are recommended vaccines. They are all included in the National Vaccine Prevention Plan 2022-2022, and are expected to be offered for free to specific population groups, which are those at greatest risk of infection.

Read also: Newborn vaccinations: what they are and schedule

Meningococcus C is responsible for the 30-50% of meningococcal meningitis and for this reason the Ministry of Health strongly recommends vaccination (not compulsory) for all children between the ages of 13 and 15 months. The vaccine against meningococcus C has also been introduced in the LEA (Essential Levels of Care) and is therefore free throughout the country. This has made it possible to vaccinate more and more children and to have a significant reduction in cases of meningitis C, with the result that serotype B is currently the most frequent in the country.

For adolescents, on the other hand, the tetravalent ACWY, the use of which is however approved from the age of two.

Between December 2022 and January 2022, some (even fatal) cases of invasive meningococcal disease C, which is why the city's Health Protection Agency (ATS) has launched a mass vaccination campaign to offer free vaccination against Men C to the population of the affected area between the ages of 11 and 60.

In the vaccination calendar 2022-2022 it is indicated as a vaccine recommended for teenagers, both as a completion of coverage (for those who had already been vaccinated with Men C), and as a first immunization for those who had never had the meningococcal C vaccine. In this case, it can be done already from the age of two.

The tetravalent vaccine is also recommended for travelers to countries where these meningococcal serotypes are present.

Read also: Vaccinations for adolescence provided for by the Vaccine Prevention Plan

The Meningococcal B vaccine (Men B)

It is one of the great innovations of the 2022-2022 vaccination plan, which provides for it for all new born. Again, this is a highly recommended but not mandatory vaccination. The Vaccine Prevention Plan includes:

Although administration can be done simultaneously with the following vaccines: hexavalent, pneumococcal conjugate, measles, mumps, rubella and chicken pox, the Ministry of Health recommends carrying out this vaccination in a separate session.

As no definitive data on the duration of protection are yet available, it is not excluded that in the future it may be necessary to introduce an additional dose in preschool age.

The distinction has nothing to do with safety or efficacy criteria, so much so that the vaccines in question are highly recommended and they are offered by the regions in an active way (ie you receive an invitation to make them at home) and free of charge (for Men B the gratuity is valid starting from those born in 2022).

As specified by the operational circular of the Ministry of Health on the law relating to the vaccination obligation, the non-mandatory nature of these vaccinations (as well as against pneumococcus, rotavirus and HPV) is justified by the fact that they prevent less frequent diseases in our country, or not. particularly contagious.

How safe are meningococcal vaccines

The meningococcal vaccines were specially formulated for infants, but may still cause some mild side effects. "The most common side effects of vaccines against the meningococcus C (also tetravalent) are redness, swelling, and pain at the injection site, which last for 1-2 days, "explains Declich." Systemic reactions are rarer and include mild fever, sleepiness, headache, nausea, and general malaise, which they resolve in 2-3 days ".

"For the vaccine against the meningococcus B there is a greater finding of fever, which occurs in about 70-80% of cases, especially if the vaccine is done concurrently with others ".

Finally, it should be considered that, as with any other vaccination, "even vaccines against meningococcus can cause convulsions or allergic reactions of various degrees up to anaphylactic shock, but these are extremely rare situations". To understand better, these are reactions recorded by 1 case per 100 to 1 case per million doses administered. However, these are so rare problems that it is very difficult to establish whether the vaccine is really the cause or whether it is a coincidence.

Who does not need to be vaccinated

Children who have previously experienced severe hypersensitivity (anaphylaxis) to the active substances or to any of the components and excipients contained in the vaccine should not be vaccinated.

To do or not to do vaccines?

"Vaccines are extraordinary drugs - says Silvia Declich - whose use has made it possible to reduce the frequency of very serious diseases, if not eradication, as happened with smallpox".

It is true that some infectious diseases, such as polio or diphtheria, are very rare or even have already been eliminated in the country and in Europe, thanks to effective national immunization programs. However, these and other vaccine-preventable diseases are still present, especially in some parts of the world, and travelers can therefore become infected and import such diseases in countries where they are not present. For example, fatal cases of diphtheria in unvaccinated children have unfortunately been recorded in Spain, England and Belgium and this shows us that the bacterium still circulates in Europe.

"When vaccination coverage levels drop, epidemic outbreaks occur. This is why, even today, measles, mumps, rubella outbreaks are reported, in community of unvaccinated children because they belong to populations that are difficult to reach or because parents do not want to vaccinate their children. "And the expert continues:" We must not forget that with vaccinations we obtain two purposes: on the one hand we protect ourselves from potentially serious diseases; on the other hand it contributes to the so-called "herd immunity", which is obtained when a very high percentage of the population is vaccinated and protects the remaining part, thanks to the reduced circulation of an infectious agent ". This applies to all diseases preventable with vaccines except tetanus, which is not transmitted from person to person. Vaccinating is therefore in reality a very important choice for individual protection but which also has repercussions for the entire community.

add a comment of Vaccines against meningococcus for children