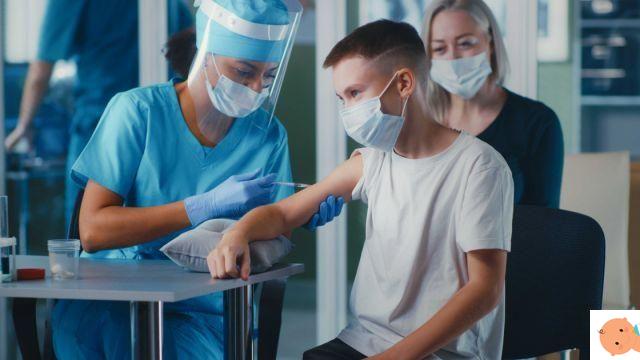 The question vaccine'sì o no' continues to be at the center of a heated (and infinite) debate between for and against. More specifically, the anti-vaccine camp, widespread almost everywhere, fears side effects. In Del Paese, according to a recent survey conducted by the National Observatory on Child and Adolescent Health (Paidòss), 4 out of 10 parents have this fear.

To families, he addresses - with the aim of shedding some light - one researcher of the University of Texas, Jennifer Raff, biologist, specialized in genetics (author of numerous scientific articles also for the Huffington Post).


His 'Letter to parents', published on his blog - where he speaks on scientific topics and clichés - has sparked controversy in the US and continues to be picked up online.

The intervention of Jennifer Raff, who strongly believes in scientific dissemination, has made the rounds of the web because it presents i key points in support of vaccines bringing back the Scientific studies (in English) on the subject.

Here 10 of the main concepts explained by the researcher in her letter, where she immediately invites parents to realize how those who minimize the risk of certain diseases (for example, measles, whooping cough, chicken pox), are lying.

1. The numbers The anti-vaccine array claims that vaccines are not as effective in preventing disease, but every year the lives of 3 million children are saved by vaccinations, and 2 million children die each year from vaccine-preventable diseases.

2. Rigorous testing Vaccines are subjected to the highest level of scrutiny than any other drug. A recent study, for example, tested the safety and efficacy of the pneumococcal vaccine in more than 37.868 children.

3. Effetti collaterali Side effects are now known and quite mild, apart from some rare cases.

4. Vaccines and autism The MMR vaccine does not cause autism: the issue has been extensively studied by numerous investigations all studies confirm that there is no correlation. Nor is it true that thimerosal in vaccines causes autism. However, it has not been present in most vaccines since 2001.

5. Aluminum does not it is harmful Aluminum in vaccines (an adjuvant, or a vaccine component designed to enhance the body's immune response) is not harmful to children as anti-vaccine activists claim.

Through breast milk, babies actually consume more aluminum than they do with vaccines and, in any case, very high levels are needed for it to cause harm.

6. The vaccine takes effect if all children are vaccinated Among those opposed to vaccines, there are those who argue that it is useless to give it to their children, because so many other children have been vaccinated. This position has no scientific basis.

First of all, vaccines are not always 100% effective - explains Jennifer Raff in her letter - so it is possible for a vaccinated child to be infected. Furthermore, there are some people who cannot undergo vaccines because they are immune deficient, or allergic to some component. In this case, their health depends on the community around them.

Families who decide not to vaccinate their children against infectious diseases are putting not only their own children at risk but also those of others.

7. A great success of science Vaccines are one of the biggest public health successes. According to the author, anti-vaccine activists cannot oppose valid arguments to the overwhelming scientific evidence. As for her, she is ready to be accused of working for pharmaceutical companies (and she never did) and of not being a scientist.

8. PerchIs there a lot of misinformation about vaccines? According to the author, incorrect information on vaccines is also partly linked to the business of alternative remedies that generates fear (and mistrust) of science-based medicine.

On the other hand, the researcher is aware that within the anti-vaccine movement there are exponents with good intentions. Too bad this does not prevent microbes from spreading with disastrous consequences.

It would be important, for example, to find out how the immune system works and how vaccines are developed. Equally essential is to get the best information on the figure of Andrew Wakefield - disbarred from the medical order - and his theses on the link between the MMR vaccine and baseless autism.

10. With a little commitment, you can access more informationù correct Scientific articles appear complicated to non-experts but Jennifer Raff is convinced that everyone can understand them with a little practice and commitment. In particular, the researcher recommends using this great resource for evaluating medical information online.

To keep things simple, he also wrote a guide for non-scientists on how to juggle science info. Investigating the problem thoroughly is of vital importance for everyone, from the point of view of the researcher, and it is good to confront and talk to pediatricians when in doubt rather than relying only on the Internet.

add a comment of Vaccines for children yes or no? Letter to the parents of a US researcher