Vaccines in pregnancy, what they are and when they should be done 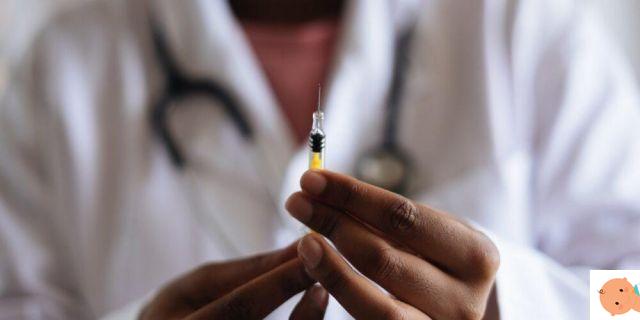 During pregnancy, many gynecologists and doctors suggest using the 40 weeks as a path to get to know and treat your body better. Start eating right, exercise right, avoid excesses and pay attention to your health. Furthermore, just to safeguard yourself and the little creature that is growing inside, it is also advisable to undergo two vaccines during pregnancy: the one against the flu and the one against whooping cough. Here because.

According to the current position of the WHO (World Health Organization), all pregnant women should be vaccinated before the flu season. In Del Paese, among the vaccinations recommended during pregnancy, the one against the flu can be done indifferently in the first, second or third trimester.

The Ministry of Health stresses that the flu vaccine in pregnancy is important because the disease should not be taken lightly. Perhaps not everyone knows that the flu increases the risk of being hospitalized, of giving birth to a premature or low-weight baby, of having a pregnancy termination. Better to prevent it.

The period set aside for the flu vaccination campaigns is, "due to our climatic situation and the temporal trend shown by the flu epidemics in Del Paese, the autumn period", writes the ministry, giving the guidelines. In particular, it is possible to vaccinate from mid-October until the end of December. And this also applies to the vaccine in pregnancy.

As we said, among the vaccines in pregnancy that are strongly recommended by gynecologists and infectious diseases, there is the one against whooping cough. It is used to protect the newborn until he receives his dose of the vaccine, that is, at two months of life. This is because antibodies cross the placenta and reach the fetus.


Pregnant women carry out the pertussis vaccine in pregnancy in a single administration together with that for tetanus and diphtheria (dtpa vaccine). In fact, there is no single dose against pertussis alone. The ideal period for the recall is the one between the 27th and 36th week of pregnancy.

According to the Ministry of Health, this vaccination "must be carried out at every pregnancy, even if the woman has already been vaccinated or is up to date with decennial boosters or has had pertussis". In fact, if contracted by the newborn in the first months of life, this pathology can be very serious or even fatal and, according to studies on the subject, the source of infection is frequently the mother. Furthermore, according to scientific evidence, babies born to vaccinated mothers are much less likely to get sick with pertussis in the first few months.

What vaccines in pregnancy can not be done

Vaccines contraindicated in pregnancy are those that contain live attenuated viruses. In particular, these are the MMR vaccine, against measles, mumps and rubella, and the one against chickenpox. Vaccination against HPV, the human papilloma virus, is also not recommended.

If taken with a baby bump, rubella can have very serious repercussions on the baby's health. This is why among the preconceptional tests to do before starting to try to have a baby, the so-called Rubeo test is done, which is used to see if you have had the disease or not. If you have never contracted it, you can get the rubella vaccine before pregnancy, but not if it has already started.

Baby Shower cakes: the most beautiful cakes for the birth of a baby

Month after month pregnancy video: a look into the baby bump

add a comment of Vaccines in pregnancy, what they are and when they should be done