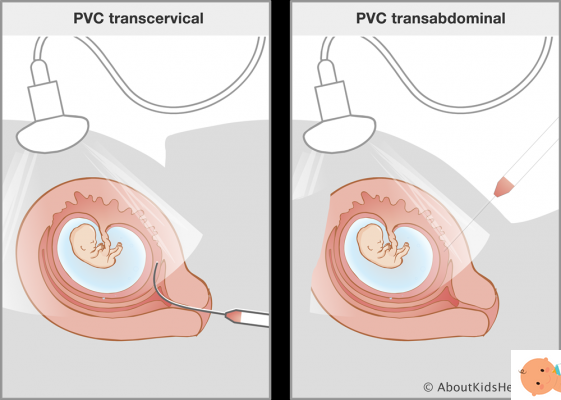 Il vaginal / rectal swab in pregnancy it is performed a 36-37 weeks of gestation and it serves to detect the presence of group B beta-haemolytic streptococcus or Streptococcus agalactiae, a bacterium harmless to the mother and to the fetus but potentially dangerous for the baby at birth. If the test is positive, antibiotic therapy before delivery to eradicate it.

Everything you need to know about this exam, with the advice of , gynecologist of the team that deals with the delivery room, physiological pregnancy and puerperium of the Buzzi hospital in our city.

You are almost there: there are a few weeks left to the birth of your baby and it seems to you that time is flying by. You have already prepared the suitcase for the hospital, but there are still many things to do ....

Read also: The development of the fetus in the 40 weeks

What is vaginal swab

The swab is a non-invasive collection

The vaginal / rectal swab is a collection of a small amount of vaginal and rectal secretion, absolutely painless and non-invasive for the expectant mother.

The vaginal swab is done towards the end of pregnancy

Detects the presence of type B beta hemolytic streptococcus

The swab is made to highlight the presence or absence of the Type B beta hemolytic streptococcus, a germ that can be present quite frequently in the vaginal-rectal environment. It is a bacterium that does not cause any discomfort to the woman (who usually does not even notice that she has contracted it) and during gestation it is generally not transmitted to the fetus.

However it is important to reveal its presence because it could contaminate the baby at the time of delivery, during the passage along the vaginal canal. The risk that the baby, once contaminated, will contract the infection is very low, but if it does the consequences can be very serious since the infection, albeit in rare cases, can become systemic (septicemia) and cause meningitis or neonatal death.

Why a vagino-rectal sample is done

Generally both withdrawals are made because theintestinal environment it can be easily colonized by the germ, and often there can be contamination between one channel and another.

What to do if the swab is positive

The therapeutic strategy provides that at the onset of labor mom is subjected to one intravenous antibiotic treatment every four hours, which allows you to quickly reach adequate concentrations of the drug in the blood, suitable for sterilizing the vaginal environment.

For antibiotic coverage to be effective, it is sufficient to start administration four hours before delivery. It is important that the therapy is started at the beginning of labor and not before, otherwise resistant bacteria could be selected which are therefore still 'alive and well' at the time of delivery.

The antibiotic is not harmful to the newborn

Anyone who fears that a massive administration of antibiotics could cause harm to the newborn can rest assured. On the contrary, it will provide him with one antibiotic coverage in rapidly effective concentrations which will further protect it from the risk of infection.

No drugs for those who have a caesarean section

Antibiotic prophylaxis is not carried out if the woman gives birth with caesarean (unless there has been rupture of the amniotic sac, which could favor the ascent of infections in the uterus) simply because the baby does not pass through the vaginal canal with the caesarean section.

Check the baby after birth

Even if the antibiotic prophylaxis has been done correctly, after the birth the baby is given a swab at the oral-pharyngeal level and at the level of the ears to rule out that he has contracted the infection. In the event of a positive outcome, the baby will also be subjected to antibiotic therapy. The new mother, on the other hand, will no longer have to follow any therapy, nor are remote controls provided, unless the woman feels discomfort, such as burning or vaginal itching.

With the new Lea (essential levels of care), approved in 2022, the vagino-rectal swab in pregnancy has been inserted among the tests carried out by the National Health Service. It must be said, however, that not all the Regions have fully implemented the new Lea, and in some cases it could still be provided for a fee.

What does the vaginal swab consist of?

The vaginal swab consists in the collection of vaginal secretions using a small swab. The secretions are placed in a culture medium to identify pathogenic germs for the genital system.

When should the vaginal swab be done?

The vaginal swab is done in the presence of some vaginal disorders:

Read also: Prepare for childbirth TAG:
Covid-19 tampons for children: everything you need to know ❯