Vices for newborns: do they really exist? 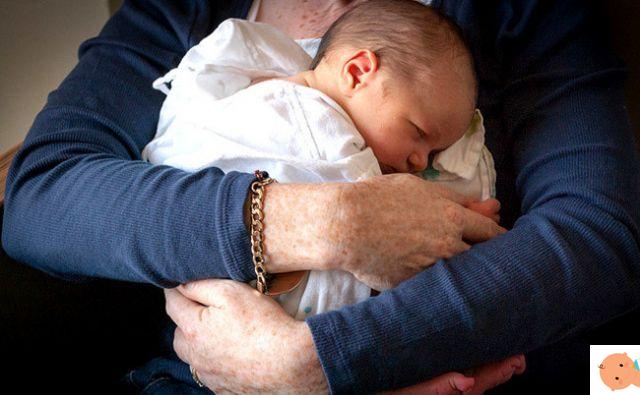 You always keep it in your arms, perhaps with the help of a baby sling or baby carrier; you fall asleep in your arms; hurry up when she cries; breastfeed him on demand. In this way there is no risk of spoiling the child? No, this is the answer of Alessandra Bortolotti, perinatal psychologist and author of the book And if she takes the habit? (ed. The green lion, 2022). Because certain behaviors are not whims of 'crafty' children or little tyrants, who enjoy not letting their parents sleep or claim their contact, but the natural needs of human puppies. In short, children are born physiologically 'spoiled' and those that in common parlance are defined as 'vices' are essential basic needs of every human puppy.

The prejudice of distal care

"In the Western world, a cultural prejudice based on distal care has consolidated, according to which the baby must be removed from the breast as soon as possible, must learn to fall asleep and sleep all night independently, to eat alone, not to disturb , not to call, to play on his own, otherwise he 'spoils' and becomes too dependent on his parent "observes the psychologist.

"They are unnatural behaviors, which have no physiological confirmation, because, at least up to the age of 3, it is quite natural that the child is dependent on his mother or in any case by an adult and does not have the physical or neurological maturity to do certain things independently.

The form of care that best responds to physiology is high contact care, that is, based on closeness and close contact between parent and child. Several studies conducted by psychologists and psychotherapists, for example, have shown how the mother's body transmits safety to the newborn through the so-called 'C-tactile' fibers, or the 'nerve pathways of caress': "Nerve fibers that we all have under the dermis and which, if stimulated by gentle contact, such as a massage or a caress, lead to a 'positive' signal to the brain that forms a kind of imprinting and pushes us to search for that type of contact in the future "comments the psychologist. "A type of contact that stimulates the production of growth and well-being hormones, such as oxytocin, a hormone that also positively affects breastfeeding."

Breastfeeding is not a vice

Speaking of breastfeeding, one of the main vices that mothers fear to instill in their babies is that, if you breastfeed the baby every time he cries or shows he wants to latch on, the breast becomes like a pacifier and the baby takes the vice to console oneself only by latching on to the breast.

"Breastfeeding on demand is not a vice, but a physiological need of the child, who finds nourishment, warmth, reassurance and comfort in the mother's breast" observes Bortolotti. "Furthermore, the only law of breastfeeding is that of supply and demand, so there is no fear of 'breastfeeding it too much', simply because the milk production adapts to the request and therefore to the needs of the child; it attaches and detaches according to a predetermined timing (at the time of our mothers-grandmothers the limit of 10 minutes per breast was set), there will not be a sufficient production of milk and the baby will need the addition ".

Run to the slightest cry

Among the common rumors there is also that one should not rush to the first cry of the newborn because it is necessary to allow time for children, even very small ones, to experience frustration. "It's a nonsensical theory for a newborn," says the psychologist. "When a child comes into the world, unlike all other puppies, he is born completely dependent on the adult, because he cannot get food on his own, he cannot walk alone. And he is also dependent on the adult from the point of view. It will take about 3 years of addiction for you to learn to walk and run independently, to sleep through the night, to control your sphincters.

Independence arises from addiction and not vice versa. And it is favored if the child has acquired security precisely through the relationship with the parents and with those who take care of him. Indeed, the more the newborn, when he was dependent, has been listened to and satisfied in her needs, the more easily and serenely he will reach independence and grow psychologically healthy ".

Yes, to look after, but also to delegate

High-contact care does not mean that the mother becomes a 'hostage' to her child and cannot do anything without him. "It is nice that mum and baby are in close contact as often as possible, but we also need breaks in which mum can think of herself" explains Bortolotti. "Because you live 'with' the child, not 'despite' the child. This means that at certain times of the day the mother must be willing to delegate, without feeling the only one to have the honor but also the burden of care In this sense it is essential to have the possibility of support from the father, a grandmother, an aunt or a babysitter while the mother allows herself a shower or a little rest. it could be defined the village, that is, a network of supports that do not make the mother feel alone, but surrounded by other figures who can help her in carrying out practical matters and who protect mother and newborn, promoting a healthy relationship between them. Without competing with mothers, and without interference and unsolicited advice. Because today's grandparents were parents in the days when it was recommended to breastfeed no more than 10 minutes per breast and let the baby cry 'so lungs' !

In the absence of the 'village', help can come from other supports: the classic is a nice soft mat, where to support the baby when he sleeps or when the mother has to do chores that she cannot do with the baby in her arms. "If the child has made the 'full' contact with the mother at other times, she will gladly tolerate these detachments" observes the psychologist.

"Detachments that, with the growth, will become more and more spontaneous and frequent, because, especially starting from 6-7 months, it will be the child himself who progressively distances himself from the mother because he will want to move, explore. And have fun. At his own pace. and with its safety stock - and not of vices! - accumulated thanks to the bond developed with the mother in the previous months ".

TAG:
Birthmarks in pregnancy: what they depend on, how to behave ❯

add a comment of Vices for newborns: do they really exist?