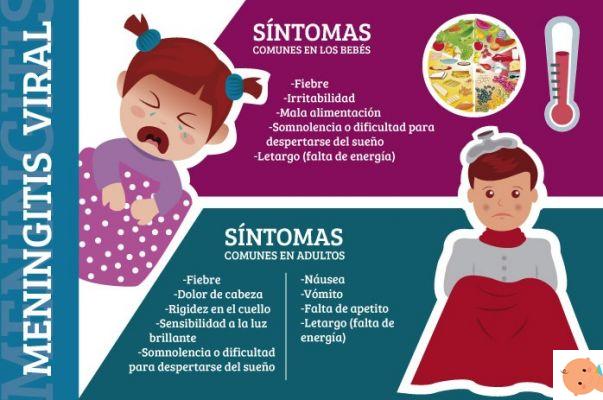 High fever, nausea, vomiting and neck stiffness are just some of the symptoms that the child may have in case of meningitis: a disease characterized by inflammation of the meninges. Meningitis can be caused by the infection of microorganisms such as bacteria, fungi, parasites and, in most cases, viruses. Anyone can contract meningitis but, according to the Del Paesena Society of Pediatrics, children under the age of four (in particular under one year of life) and adolescents are generally the most affected in pediatric age.

In this article we address the issue of viral meningitis, the most common but, fortunately, also the least dangerous, especially compared to the bacterial one. Let's see in detail what viral meningitis is, how it manifests itself in children and how parents should behave.

What is Viral Meningitis

Meningitis is an infectious disease that affects the central nervous system. More precisely, when we talk about viral meningitis we are referring to "an inflammation, in this case caused by viruses, of the meninges, a kind of three-layer protective film that surrounds the brain and constitutes the last defense barrier of the noblest part of the organism "he says Fabrizio Pregliasco, Medical Director of the IRCSS Galeazzi Hospital in our city. The meninges are in fact thin membranes that cover the brain and spinal cord.

"It is a very efficient barrier that normally manages to prevent the passage of any infection. In the presence of particularly aggressive germs and in cases of greater vulnerability of the organism (pre-existing diseases, stress, constitutional weakness), however, this barrier can be violated and leads to meningitis ".

Viral meningitis can be caused by many virus, which in most cases involve other organs, for example:

Less frequently, thanks to vaccinations, viral meningitis can also be caused by the measles, mumps and rubella viruses. More rarely, even some parasites, such as ticks or the tiger mosquito could transmit viruses through the victim's bite or sting.

To date, thanks to the vaccination against polio that made it possible to eradicate this nasty disease, poliovirus meningitis has disappeared in Del Paese.

What are the symptoms of viral meningitis

Viral meningitis has a incubation period (i.e. the time that passes from the moment of infection to the appearance of the first symptoms) of about 3-6 days. Initially, in the early stages of the disease, they can manifest themselves flu-like symptoms such as malaise, headache, sleepiness and lack of appetite. After a couple of days these disorders, which can vary according to the age of the patient, can get worse.

As the National Institute of Health claims, the characteristic symptoms of viral meningitis are similar to those of the dreaded bacterial meningitis:

Other signs commonly associated with meningitis are:

in Infants continuous crying, body stiffness and swelling of the fontanelles can also occur.

In general, however, the symptoms can be present more or less simultaneously. "But most viral meningitis has one very nuanced symptoms, so much so that the disease is not even diagnosed because it is mistaken for another type of infection, "he says Alberto Villani, Head of General Pediatrics and Infectious Diseases of the Bambino Gesù Pediatric Hospital in the city.

How is the diagnosis of viral meningitis made

The surest diagnosis is with one lumbar puncture which aspirates and allows to analyze the spinal brain fluid and to distinguish whether the meningitis is viral or bacterial in nature. This is an investigation that is necessarily carried out in the hospital.

How viral meningitis is treated

Fortunately, viral meningitis is a disease that heals on its own, perhaps with the help of therapies to alleviate the symptoms, if for the child they are particularly intense. Viral meningitis, unlike the bacterial and fungal ones that require hospitalization, can be cared for from home if the child's health conditions allow it.

The child with viral meningitis will have to to rest and possibly take analgesics against headaches and antiemetics against vomiting. "In the vast majority of cases the course is benign and, even if no treatment is given, everything is resolved within ten days, with a perfect recovery of the general conditions" says Villani.

Only in the presence of some particularly aggressive viruses, such as Herpes Simplex or Zoster, therapy with specific antivirals will be required to accelerate healing.

Viral meningitis is generally not dangerous, or at least not as dangerous as bacterial meningitis, but if it affects a child with immune system disorders, then the clinical picture may be more severe and hospitalization may be required.

Fortunately, viral meningitis is a disease with low contagiousness. As evidenced by the Centers for Disease Control and Prevention (CDC), people who have been in close contact with a person with viral meningitis could be infected with the virus which made that person sick, but it is unlikely that they too will develop meningitis.

As Dr. Pregliasco "viral meningitis has one very low contagiousness, which becomes null in the forms transmitted by a vector, that is in the case of mosquito bites or tick bites. "Not for nothing, precautions or prophylaxis are not required for family members or for the classmate, unlike what happens for the bacterial meningitis.

Is it necessary for the patient to be in isolation?

Until it is understood what it is, the hospital as a precaution could keep the patient in isolation. "It is also a form of protection for the child, who during the infection is more depressed from the immune point of view, so he could be prone to over infections" underlines Pregliasco.

Is it possible to prevent viral meningitis?

In some cases, viral meningitis can be prevented. How? With vaccines. In our country we have MPRV vaccination (against measles, mumps, rubella and chicken pox) which it also indirectly protects against complications of these diseases, including meningitis itself. For the other viruses that could cause viral meningitis, however, there are currently no vaccines.

The other important prevention rules are those of common sense: it is important for both the child and the adult to sleep an adequate number of hours and eat properly.

TAG:
The mind of teenagers: 10 ABSOLUTELY things to know to understand them better ❯