Vitamin A in pregnancy, how much to take 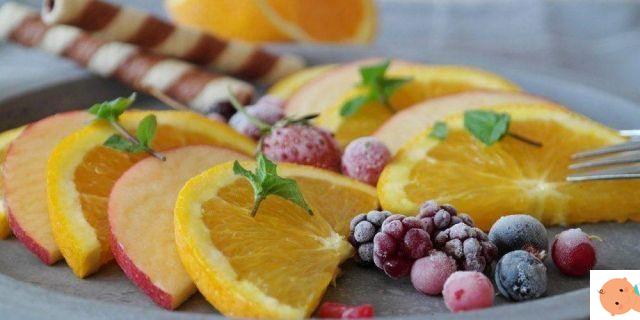 Vitamins are very important micronutrients for the well-being of each of us. This is demonstrated by the fact that, when there is a shortage of any of them, we begin to not feel in great shape. Each class of vitamins has a particular action and, in some moments, such as pregnancy, it is necessary to ensure a greater need to make our baby feel good too. The most famous vitamin with the belly is probably B9, that is the folic acid that we all know to be fundamental. Here we want to talk about vitamin A in pregnancy: how much of it should be taken, what is it for, why both the deficit and the excess must be avoided are some of the points that we will analyze.

What is Vitamin A

It is a fat-soluble vitamin. It means that it is assimilated by the liver which thus creates "supplies" to be used when needed. Our body does not produce vitamin A. Therefore it must be introduced with the diet or, in case of significant deficiency, through supplements.

Vitamin A is also known as retinol, while carotenoids are a different thing - the precursors of the actual vitamin. In other words, retinol is used directly by our body, while carotenoids must first be transformed into a vitamin.

What is Vitamin A for?

First of all, vitamin A is of particular importance for sight. Together with its precursors it is one of the elements that make up rhodopsin. It is a substance present on the retina and which is involved in the mechanisms that affect sensitivity to light. We will see later that vitamin A deficiency has consequences precisely on the visual capacity.

Vitamin A has a fundamental action for the development of bones and their strengthening and also for the growth of teeth. In addition, it is involved in the functioning of the immune system and contributes to healthy skin and hair.

Vitamin A in pregnancy

Vitamin A in pregnancy certainly plays a not secondary role. In fact, it serves for embryonic development and the normal growth process of the fetus, regulating the differentiation of tissues.

Foods rich in vitamin A

As we have seen, humans get vitamin A with food. Generally speaking, in developed countries, nutrition guarantees a sufficient supply of this nutrient. Retinol is mainly present in foods of animal origin. Among these, liver, egg, milk and its derivatives, fish are particularly rich.

The precursors of vitamin A and, among these, especially beta-carotene, are found in vegetables, especially in those of yellow, red or orange color: to fill them up, then green light to carrots, apricots, watermelon, tomatoes, pumpkin, fruits of forest, oranges, mandarin oranges etc. However, all vegetables, greens and fruits have considerable amounts of carotenoids.

Like most vitamins, A is easily lost in heat. It is therefore always advisable to eat foods that contain it raw or in any case undercooked.

Daily requirement of vitamin A

According to the recommendations of the Istituto Superiore di Sanità, the recommended amount per day is 0,6-0,7 mg of retinol, up to 0,95 during breastfeeding.

Daily requirement of vitamin A in pregnancy

The daily requirement of vitamin A during pregnancy increases to meet the needs of both the expectant mother and the baby. A deficiency or, conversely, an excess of this vitamin is harmful to both. The need to increase the dose of vitamin A is more pronounced especially in the third trimester of pregnancy.

According to SIGO, the Del Paesena Society of Gynecology and Obstetrics, supplementation of vitamin A in pregnancy is not necessary if "the usual quantitative intake is greater than 3 times the Recommended Daily Allowance", ie the recommended doses. For the gynecologists of the Scientific Society this happens in most industrialized countries.

Symptoms of a retinol deficiency are more significant in underdeveloped nations which are those where the deficiency is most severe due to malnutrition. Where this problem is less dramatic, the symptoms are mild, at most moderate. However, it can get to severe levels. In affluent areas of the world, those who have a disease that involves intestinal malabsorption, such as Chron's disease or celiac disease, are more at risk. Vegans also have a greater danger of vitamin A deficiency.

The first alarm bell is visual problems, especially in the evening and at night. In severe cases, low doses of the vitamin can also lead to blindness. Furthermore, infections (especially affecting the gastrointestinal and respiratory systems) are more frequent and intense because the immune system does not work well. Other signs are dehydrated and flaky skin, weakened hair, delayed growth and development of children.

Vitamin A deficiency in pregnancy

A lack of vitamin A in pregnancy can cause fetal malformations, difficulties in the process of development and growth, sensitivity to infections.

How retinol deficiency is treated

A mild to moderate retinol deficiency is treated with supplemental intake. It is also advisable to vary the diet, in order to ensure the right intake of the vitamin.

Excess of vitamin A

Typically, it is caused by too high a dose of supplements. On the other hand, it is very rare that the triggering cause is food: it is really difficult for one to "intoxicate" vitamin A while sitting at the table. There are two forms of hypervitaminosis: acute and chronic. The first causes drowsiness, headache, nausea, vomiting, increased intracranial pressure, irritability.

High doses of carotenoids are not of particular concern. At most, there may be a slight yellow-orange coloration of the skin which tends to disappear when the intake of vitamin A precursors is suspended.

Excess of vitamin A in pregnancy

When expecting a baby, too much vitamin A can be harmful. In fact, it can cause fetal malformations. In this case we speak of the teratogenic effect of retinol, ie the possibility that it causes abnormalities in the baby. The damage depends on the quantity taken and the period of gestation.

Pregnant women therefore have to be careful not to take excess vitamin A (obviously they will be helped in this by the gynecologist). The supplements will therefore be prescribed only in case of real need. Do not abuse by consuming liver which contains high levels of retinol. If you are greedy, eat it once in a while.

add a comment of Vitamin A in pregnancy, how much to take