Vitamin B6: a possible ally against nausea in pregnancy 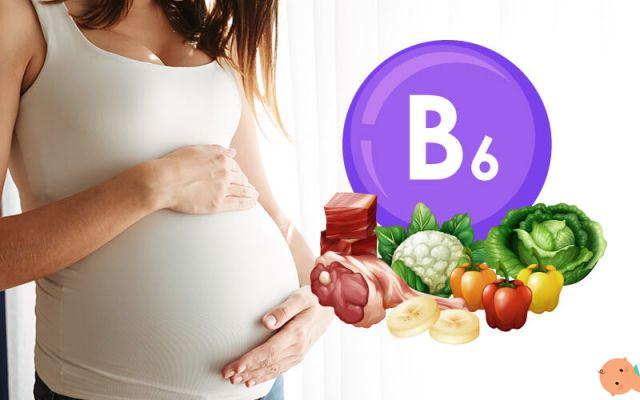 For some - a lucky few - the problem does not arise: the first months of pregnancy pass without particular problems or annoyances. Others - about three out of four women, the majority - have to live with one of the most common ailments of pregnant women: nausea.

Foods that contain vitamin B6

Foods rich in vitamin B6 are useful for the proper functioning of the nervous system. Vitamin B6 is also a valuable aid against the annoying symptom of nausea and yes ...

The help of vitamin B6

There are many "food tricks" that can help reduce discomfort, but if working on nutrition is not enough, a vitamin can also help. Vitamin B6.

"Like all B vitamins, it is an important substance as an anti-inflammatory and for the synthesis of new blood cells. In addition, however, B6 also has a natural anti-nausea effects"explains the professor, gynecologist and endocrinologist and head of the PMA center of the Policlinico San Matteo of the University of Pavia." This is because vitamin B6 modulates the balance of neurotransmitters such as serotonin and noradrenaline, which in turn modulate the 'center of control of nausea and vomiting in the brain ".

According to the Guidelines on nausea and vomiting in pregnancy of the Association of American gynecologists and obstetricians, updated in January 2022, vitamin B6 alone is already a good pharmacological solution in case of nausea that does not go away with the precautions of the diet or the recourse to non-pharmacological solutions such as ginger or anti-nausea bracelets. The World Health Organization Recommendations for a healthy pregnancy also list this vitamin among possible proposals, along with chamomile and ginger, to alleviate symptoms without resorting to "heavier" solutions, which could have side effects. And also the site on drugs and pregnancy of the Del Paesena drug agency puts the pyridoxine (other name for vitamin B6) at the forefront as a possible treatment for nausea and vomiting.

(Read also: what is hyperemesis gravidarum)

The need for vitamin B6

"In milder situations, the gender requirement is around 10 milligrams of vitamin B6 per day, a dose also contained in some multivitamin supplements for pregnancy "underlines Nappi." It will be the doctor, however, to establish the most suitable dosage, possibly even higher, when needed ".

Vitamin B6 in food

Obviously, nothing prevents you from getting some vitamin B6 even from its natural sources, provided that nausea allows it, and aware that what is taken with food may not be enough to mitigate the discomfort. The main natural sources of vitamin B6 are:

Vitamin B6 before pregnancy

If by now many studies indicate an effective role of vitamin B6 in reducing pregnancy nausea, it must be said that some scientific results also seem to indicate a possible role in its prevention. As reported by the American guidelines, some studies have in fact observed a lower risk of nausea in pregnancy for women who already took before conception multivitamin supplements and the hypothesis is that this effect is due to the intake of a small extra dose of vitamin B6.

It should be noted that from February 2022 a new drug is available in Del Paese specifically indicated for the treatment of nausea and vomiting in pregnancy and consisting of aassociation between vitamin B6 and doxylamine, an antihistamine. The drug has already been used for several years in other countries such as Canada, Spain, the United States and is considered extremely safe.

Why is vitamin B6 important in pregnancy?

Vitamin B6 also has a natural anti-nausea effect because it modulates the balance of neurotransmitters such as serotonin and noradrenaline.

What is the daily requirement of vitamin B6 in pregnancy?

The daily requirement for vitamin B6 is approximately 10 milligrams of vitamin B6 per day, a dose also contained in some multivitamin supplements for pregnancy.

add a comment of Vitamin B6: a possible ally against nausea in pregnancy