Vitamin D in pregnancy: should I take supplements? It depends 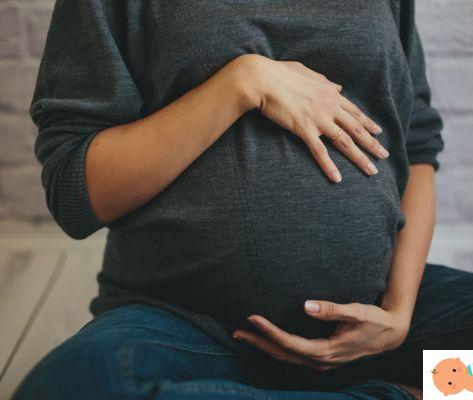 Vitamin D, also known as the sun vitamin, it is very important during pregnancy for the well-being of the mother and baby. It is normally produced in the skin thanks to the sun's rays, but a small part can also be taken with food. The benefits it brings are numerous and during pregnancy it is important to be careful of any deficiency that could pose serious risks including gestational diabetes, hypertension, preeclampsia and for the low birth weight fetus.

Does that mean all mothers-to-be need to take a supplement? It depends!

What is vitamin D used for: effects on the skeleton

"Its traditional role is to regulate calcium metabolism," explains Dr. Angela, nutritionist biologist. Vitamin D, in fact, is essential for the absorption of calcium and therefore for bone health and, in pregnancy, it is very important for mineralization of the skeleton of the fetus.

According to the Consensus on vitamin D in pediatric age, elaborated in 2022 by the Del Paesena Society of Preventive and Social Pediatrics (SIPPS) the available studies (which however are not many and not always of excellent quality) seem to indicate that the state of vitamin D of the mom "can influence the processes of acquisition of the bone mass of the fetus and of the unborn child, even in the later stages of life until the peak of bone mass is reached ".

In addition, there may also be an effect on the health of the child's teeth: a study published in the journal Pediatrics showed that there is an association between low vitamin D levels in pregnancy and increased risk of tooth decay in children.

What vitamin D is used for: other (possible) effects

"Now the latest scientific evidence reports that vitamin D is important in stimulating the immune system, has an anti-inflammatory action and also intervenes in carbohydrate metabolism", says the doctor who then adds "This suggests that vitamin D can play a role 'protective action against some diseases of pregnancy, such as gestational diabetes and preeclampsia ".

There are still no definitive results, but the studies carried out seem to indicate an association between low levels of vitamin D in pregnancy and an increased risk of gestational diabetes, preeclampsia, but also low birth weight, as also pointed out in this review published in 2022 by the Cochrane Collaboration. "In the same way - he adds - some surveys suggest that women who receive a vitamin D supplement are less subject to these risks".

The Cochrane Collaboration review also points out that the risk of premature birth increases if vitamin D is taken in combination with football.

Furthermore, a review of the effects of vitamin D supplementation in pregnancy conducted in 2022 by various researchers (including an expert from the World Health Organization) concluded that supplementation appears to be associated with a lower risk of preeclampsia, but that this observation must be confirmed with other investigations. "What is certain is that we are in a very recent field of study, and that it is certainly worth investigating the matter. Vitamin D is a nutrient on which scientists are highlighting different roles, "he comments.

Read also: Fetal growth retardation: what it is, how to intervene, what are the prospects for the future

Vitamin D and the risk of miscarriage

Similarly, the possible association between one is still to be evaluated vitamin D deficiency and the risk of miscarriage in the first trimester, or stillbirth in the following trimesters. "This too is an epidemiological data not yet very clear, it has been seen that in women who have had cases of polyabortivity there was a lack of vitamin D". Indeed, some studies seem to indicate that this association exists, especially in the case of repeated abortions, while others have not found it.

However, a role of vitamin D in the mechanisms leading to one seems increasingly evident proper formation of the placenta in the very early stages of pregnancy, at least as summarized by an article signed in the Journal of Endocrinology at the beginning of 2022 by a group of scholars from the University of Birmingham, England. Another article published in the journal Clinical Nutrition in 2022 would seem to confirm this information, also specifying that severe vitamin D deficiency in the first trimester represents a risk factor for placental inflammation in high-risk pregnancies.

Where is Vitamin D found?

"Let's start by saying that we manage to get vitamin D not so much with food, but with sun exposure. With food, however, we can still reach about 20% of the daily intake". Although, the main dietary sources of vitamin D are relatively few. "For the sources of animal origin, the foods to take into consideration are: oily fish which contains omega 3, an important nutrient during pregnancy, but also salmon and eggs, while milk, which is usually associated with vitamin D, is not very rich in it " .

What if the expectant mother did not eat food of animal origin? "No problem - says the doctor - vitamin D is also present in foods of plant origin, although it is found in a form that is less bioavailable. A very interesting source from this point of view is avocado, but also all leafy vegetables ".

We must also not forget that on the market today we find a great one variety of fortified products with vitamin D.

As the doctor pointed out, however, the dietary intake of vitamin D is quite limited. The bulk of this vitamin is produced by the body itself, behind it activation promoted by exposure to sunlight. "Because of this it is essential to spend time outdoors"He specifies. Which does not necessarily mean sunbathing on the beach: a nice walk outdoors, every day, is enough." It is not necessary that there be the sun, 15/20 minutes of exposure to light to obtain a good synthesis of vitamin D ".

How much do you need?

According to the latest revision of the LARN, the reference nutrient intake levels for the Del Paesena population, during pregnancy we recommend an intake of 15 micrograms per day, equal to 600 International Units (IU). The value considers both the dietary intake and that derived from exposure to sunlight.

Il maximum tolerable level of intake, again for pregnant women, is instead of 100 micrograms per day, equal to 4000 IU. Up to this threshold we are sure that there are no harmful effects for the mother and the baby.

Of course, it's hard to know how much you really get each day. In some situations it may be useful to go and see how much vitamin D is actually in the body (it's a simple blood test). "Vitamin D values, or better than, are considered in the norm 25-hydroxyvitamin D, the form sought, equal to 20-30 nanograms per milliliter of blood"he explains. Below this threshold we speak of deficiency or hypovitaminosis, which becomes severe below 10 nanograms per ml.

"In these cases it is necessary to resort to integration to avoid all those negative effects that epidemiological studies have highlighted" concludes the doctor.

However, it must be said that no scientific or health organization currently deems it necessary to carry out a thorough screening of vitamin D values ​​in all pregnant women.

Who is at risk for vitamin D deficiency?

Certain categories of people are particularly at risk of developing a vitamin D deficiency. For example:

Apart from these, other risk factors for vitamin D deficiency during pregnancy are:

Unfortunately, there are not many data available on how widespread vitamin D deficiency is among pregnant Del Paesene women. Only two studies have evaluated the issue. The first, conducted in 2022 on a very small sample - 24 full-term women - found a vitamin deficiency in virtually all of them. The second, more recent, conducted in Piedmont on a group of about 500 women (including 200 immigrants), found rather low levels of the vitamin in just over 40% of the sample and clearly deficient levels in 18% of the Del Paesene and almost 50% of immigrants.

"Populations living in environments where there is little light, such as the populations of northern Europe, are certainly at risk, but so are the women who work long hours indoors without ever exposing themselves to sunlight they may have a vitamin D deficiency - he comments - In Lombardy, for example, some epidemiological studies have highlighted that 60/70% of women of childbearing age has a vitamin D deficiency. "

Even at an international level, however, the surveys conducted on groups of pregnant women testify to a high prevalence of vitamin D deficiency. In short: often those who are expecting a child have less vitamin D than would be recommended.

Should I take a vitamin D supplement during pregnancy?

"The answer is it depends, blood tests are done and if there is a value below 20 micrograms / ml then it will be necessary to take a supplement, but usually it is not necessary to integrate vitamin D a priori ".

We must distinguish three different situations:

1. Women at risk for vitamin D deficiency
We are talking about women:

In these cases there is some international agreement in suggesting vitamin D supplementation, namely taking a dietary supplement with this vitamin. As for the quantities, an official document of the English Royal College of Obstetrician and Gynaecologists, speaks of at least 1000 IU of vitamin D per day, while the German nutrition society recommends 800 IU per day and the Consensus Del Paeseno of the SIPPS 1000/2000 IU per day. The latest recommendations from the World Health Organization for a positive pregnancy experience are instead on lower values, recommending one supplementation with 200 IU per day for women with documented vitamin deficiency.

2. Women at risk for preeclampsia
Here the situation is a little less clear. The English document recommends the intake of at least 800 IU per day of vitamin D, in combination with calcium, for women at risk of preeclampsia, and the Consensus Del Paeseno takes the same line, suggesting however a higher supplementation (1000 / 2000 IU).

3. Women with physiological pregnancy, without particular risk factors for vitamin D deficiency
Also in this case there are no univocal indications: World Health Organization, Ministry of Health Guidelines and Aifa, Del Paesena Medicines Agency, state that, based on available data, there is no evidence to indicate that all pregnant women take a vitamin D supplement.

After all, it is very likely that many pregnant women are already taking vitamin D, perhaps without knowing it, which is one of the components of multivitamin supplements often used in pregnancy. "The indication for all is to assume folic acid, but some manufacturers have combined this substance with others, such as iron and vitamin D, "he explains. In these products, the vitamin D content is generally 10 micrograms, equal to 400 IU: in practice, almost 70% of the recommended intake levels.

What to do, then, in this uncertain and evolving situation? For sure, talk to your doctor, to evaluate together the personal risk of vitamin D deficiency and the possible situations. "Unless you are in a situation of serious shortage, the invitation is still to rest assured"specifies." If you are taking a classic supplement, you must be reassured that you do not risk an overdose of the vitamin anyway. "In short, it does not hurt." If, on the other hand, you are not taking it, you should not worry too much about putting in this way, you risk your own health or that of your child. Well though worrying about the quality of the diet and spending time outdoors".

Hepatitis A in pregnancy

Vegan diet in pregnancy: how to avoid the risk of harm to the baby

add a comment of Vitamin D in pregnancy: should I take supplements? It depends