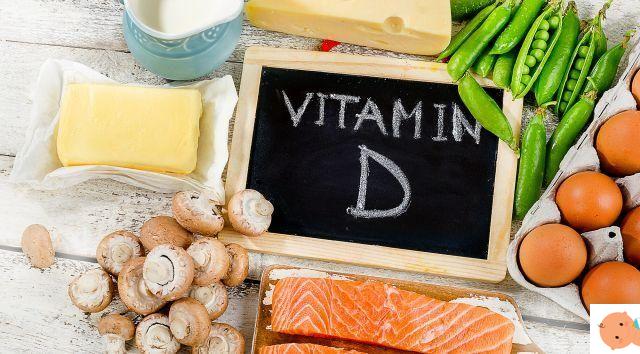 What is the vitamin D, how it is produced, what it is used for, when it is necessary to integrate it.

1. What is Vitamin D

It is actually more than just a vitamin: it is a real hormone, that is, a substance capable of stimulating various functions of the organism. In recent years it has emerged that it controls directly or indirectly the regulation of the activity of beyond 1250 genes.

2. Where does it come from

Like all hormones, vitamin D can be produced "internally" by the body. However, there is no particular gland dedicated to this purpose, as happens for the other hormones: in this case the skin functions as a gland, where the synthesis of vitamin D occurs following exposure to sunlight.

Vitamin D is also naturally present in some foods, but the amount of this vitamin that we can get in our diet is limited

3. How Much Vitamin D Matters for Bones

Its role in bone metabolism has long been known. In particular: it promotes bone mineralization by modulating the absorption of calcium and phosphates in the intestine. This is why it is essential for bone growth during childhood and adolescence - but also earlier, that is, during the fetal life - and for the remodeling of the bone, normally subjected to continuous processes of destruction and reconstruction, during adult life.

Vitamin D deficiencies in children they can lead to bone fragility or, in severe cases, a rickets. Even in adults, the deficiency of this substance leads to bone fragility. Along with that of calcium, an adequate intake of vitamin D is essential to protect against the risk of Osteoporosis. But be careful: it is very important that the intake is adequate from childhood: it is more difficult to run for cover in adulthood, if there were deficiencies as children.

4. What is Vitamin D used for, other than for bones

In recent years, it has emerged that vitamin D performs many other functions besides those related to the skeleton. For example it is very important for muscle activity, is also involved in the modulation of cell growthin immune functions and in the attenuation of inflammatory mechanisms.

5. How vitamin D is produced

The starting point for the synthesis of vitamin D in the skin is a substance derived from cholesterol, which thanks to the action of type B ultraviolet rays is in fact converted into vitamin D (or rather, vitamin D3) or cholecalciferol. In this form, the hormone is not yet fully active: it becomes active after a series of chemical steps that occur in the liver, where the so-called cholecalcifediol [25 hydroxyvitamin D or 25 (OH) D] is produced and at the kidney level, where the most active form of all is produced, the calcitriolo.

For the sake of accuracy, there is also another form of vitamin D, la vitamin D2, of vegetable origin.

6. What happens if exposure to sunlight is poor

Since it is UVB rays that stimulate the synthesis of vitamin D, if exposure to sunlight is scarce there is a reduced production of hormone, that is a risk of shortage of vitamin D.

Warning: Various factors contribute to modulating the actual level of exposure to sunlight. Between these:

7. What happens if exposure to sunlight is excessive

We remember, however, that troppo Sole is bad for the skin for other reasons (risk of skin aging and development of skin cancers).

How Much Sun for an Effective Vitamin D Synthesis?


A recent document from the US National Institutes of Health Food Supplements Office points out that some researchers believe they are needed 5 to 30 minutes of sun exposure of the face, arms and legs (or back) at least twice a week to obtain an adequate synthesis of vitamin D. It is better to use the sun in the late morning or early afternoon, however, corresponding to the time slot in which dermatologists advise against taking it to avoid risk of skin damage. Probably for these conflicting needs there are currently no official guidelines on the subject.

8. How much vitamin D is needed

According to the latest indications of the Del Paesena Society of human nutrition, issued in 2022, the daily requirement of vitamin D is equal to:

9. How do you measure your vitamin D status

The test to take to get an idea of ​​your vitamin D status is the measurement of cholecalcifediol [25 (OH) D] in the blood. In general, adequate concentrations of this substance are considered greater than 20-30 nanograms per millimeter. Below this threshold there is a condition of vitamin deficiency or real deficiency.

It should be borne in mind that different laboratories can give different values ​​of cholecalcifediol, depending on the method used for its quantification.

10. In which foods is vitamin D found

11. Who is at risk of shortage

There are different groups of people who, for various reasons, can suffer from a vitamin D deficiency, with the possibility of negative consequences for their health and, in the case of children, for their development. In these cases, supplementation with vitamin D food supplements may be appropriate.

Here's who it is:

The risk of deficiency is greater for breastfed babies, especially if the mother also does not have adequate levels of vitamin D. This is why it is always recommended to administration of 400 IU of vitamin D per day for all full-term breastfed infants.

This is because if it is true that the formulas contain vitamin D, it is also true that generally the levels are such as not to guarantee an adequate intake unless you take about one liter a day.

- People who for various reasons are poorly exposed to sunlight

For example, people who spend little time outdoors - including children and adolescents who stay all day in front of TVs, tablets and video games - or who, by religious or cultural tradition, wear very opaque clothing.

The advisability of supplementation in these cases must be determined by the doctor or pediatrician. According to the aforementioned document from Del Paeseni pediatricians, in autumn and winter it is advisable to integrate with 600UI of vitamin D per day in children over one year of age who have limited exposure to sunlight even in the summer months.

They are at risk of deficiency both because they tend to be less outdoors and because the skin, as they age, struggles more to synthesize the vitamin. Precisely for these reasons the need for vitamin D after the age of 70-75 increases.

12. Vitamin D and pregnancy, when supplementation is needed


For the expectant mother, vitamin D is very important, both because it participates in the development of the baby's skeleton and teeth, and because it seems to have a protective role against some complications of pregnancy, such as gestational diabetes, low birth weight and preeclampsia.

Recommended levels do not change from the general adult population: 600 IU per day. The question, however, is whether in these delicate conditions diet and sun exposure are enough, or if the help of some supplements is needed instead. To answer, it is actually necessary to distinguish three different situations:

- Women at risk of vitamin D deficiency
For example, women with dark skin, who rarely expose themselves to the sun, obese, or who have a vegetarian or vegan diet, very low in vitamin D. In these cases there is some international agreement in suggesting the vitamin D supplementation, although the indications on the quantity vary: at least 1000 IU of vitamin D per day for the English Royal College of Obstetrician and Gynaecologists: 800 IU for the German nutrition society; 1000/2000 IU for a document of the Del Paesena Society of preventive and social pediatrics; 200 IU per day for World Health Organization recommendations for a positive pregnancy experience.

- Women at risk of preeclampsia
In this case the situation is less clear. The British however recommend the intake of at least 800 IU per day of vitamin D, in combination with calcium, while the aforementioned Del Paeseno document suggests a higher supplementation (1000/2000 IU).

- Women with physiological pregnancy, without particular risk factors for vitamin D deficiency
Also in this case there are no univocal indications: World Health Organization, Guidelines of the Ministry of Health and Aifa, Agenzia Del Paesena of the drug, state that, based on the available data, there is no evidence to indicate to all pregnant women to take a vitamin D supplement. Conversely, some scientific societies recommend supplementation: 400 IU per day for the English RCOG and 600 IU per day for the Del Paeseno document.

However, it must be said that many pregnant women are already taking vitamin D, perhaps without knowing it, because it is one of the components of multivitamin supplements often used in pregnancy.

13. The limits not to be exceeded

Sources for this article: consensus document by Sipps, Sip and Fimp published in Del Paesen Journal of Pediatrics, 2022; Information material from the National Institutes of Health (Food Supplements Office); Vitamin D, instructions for use by ML Brandi and M. De Bac (Pacini Editore, 2022).

TAG:
Vitamin K and children: why it is so important ❯