Vitamin K and children: why it is so important 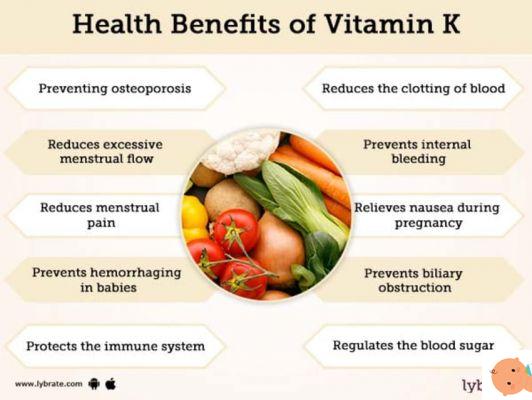 La Vitamin K it is essential for the proper functioning of blood coagulation. It also plays a role in bone health. For years, as a further preventive measure, mothers who breastfeed exclusively at the breast have been advised to administer drops from the fifteenth day of life up to 3 months old: in fact, breast milk, unlike formula, does not contain vitamin K Now, on the other hand, immediately after birth, an intramuscular injection of vitamin K is practiced directly in the hospital for newborns. Let's see the importance of vitamin D and K in newborns.

Vitamin K and children: its importance

"Vitamin K is important for the production of substances that contribute to normal blood clotting" explains Lina Bollani, neonatologist at the San Matteo polyclinic in Pavia. "At birth, babies have a physiological deficiency of this vitamin because its transfer into the uterus through the placenta is limited and consequently they can undergo the so-called hemorrhagic disease of the newborn, rare but potentially serious. "For this reason the World Health Organization recommends the administration of 1 mg of vitamin K immediately after birth, by intramuscular injection. "And since breast milk is a poor source of vitamin K - continues Bollani - in breastfed children, supplementation by mouth is generally also recommended until the completion of the third month of life", as recently recommended by the Del Paesena Society of Neonatology.

Other scientific societies, on the other hand, argue that the intramuscular injection carried out immediately after birth is sufficient, as also required by the guidelines of the American Academy of Pediatrics of 2022.

Some infants in the first few months of life may have low vitamin K levels for various reasons:

This can cause various types of bleeding: s

A lack of vitamin K also causes weakening of the bones with osteoporosis and an increased risk of fractures.

An excess of vitamin K is not harmful unless you take one anticoagulant therapy with warfarin. In this case, it is a good idea to monitor your daily vitamin K intake with your doctor.

Vitamin K deficiency can cause bleeding in babies in the first 3 months of life. The disease is conventionally divided into three forms: early, classical and late.

How to give vitamin K to the child

Immediately after birth, your baby will receive the vitamin K injection or the first oral dose, given by your doctor or midwife. If you have chosen oral administration:

TAG:
Vitamins and supplements for preschool and school age ❯

add a comment of Vitamin K and children: why it is so important