Vitamins and supplements in the first year of the baby's life 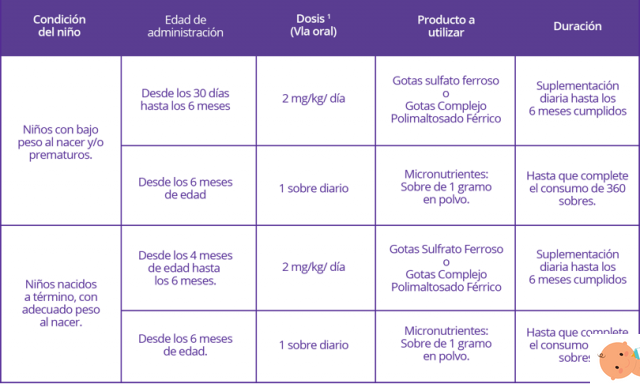 Vitamins and supplements are often misused (or rather, unnecessarily) in adults and children, but does the same apply to babies? Absolutely not, indeed, there are two supplements that are considered by all scientific societies as essential for newborns. These are vitamin D and vitamin K, which are essential to protect the health of the little ones.

In some situations, iron and fluoride supplements may also be recommended, but the pediatrician must assess the child's needs on a case-by-case basis. We see the importance of vitamin D and K in infants.

Vitamin D is very important for bone growth and development and muscles (prevents rickets), but also for the regulation of immune and respiratory functions. It is a somewhat peculiar vitamin because the main source, as well as the most effective, is the Sun. Our body produces it spontaneously as a consequence of sun exposure.

And here comes the problem: would you ever leave your little one exposed to the sun's rays? Of course not because, as indicated by the American Academy of Dermatology (AAD), the children of age less than 6 months they should never be exposed directly to sunlight.

For this reason, the Del Paesena Society of Pediatrics (SIP) and the Del Paesena Society of Preventive and Social Pediatrics (SIPPS), as well as other national and international scientific societies, recommend the administration of 400 IU of vitamin D per day for all children born at term, from birth to the first year of life, regardless of the type of feeding (whether with breast milk or formula).

In the case of premature babies, the dosage will depend on the weight of the baby.

Vitamin K together with vitamin D is really essential for the baby because it is involved in the production of substances that contribute to normal blood clotting. When a baby comes into the world, he or she has a physiological deficiency of vitamin K because its transfer into the uterus through the placenta is limited and consequently it could undergo the so-called hemorrhagic disease of the newborn, rare but potentially very serious.

To avoid unpleasant consequences, the World Health Organization recommends the administration of 1 mg of vitamin K immediately after birth, via an intramuscular injection. In breastfed babies, since breast milk is low in vitamin K, some doctors suggest the supplementation by mouth up to the third month of life, as recently recommended by the Del Paesena Society of Neonatology.

However, not everyone thinks the same. Other scientific societies, on the other hand, argue that the single injection given immediately after birth is sufficient to protect the baby, as also indicated by the American Academy of Pediatrics.

Sometimes these vitamins can be combined with other supplements, but it is up to the pediatrician to decide if and when it is needed.

Read also: Vitamin K and children: why it is so important

Fluoride supplements, yes or no? On the administration of supplements containing fluoride to newborns, for the prevention of caries, the opinions of scientific societies are very different, or rather opposed, so much so that there are two schools of thought. There are those who argue that the fluoroprophylaxis should be started from the first month and who, instead, thinks that it should be postponed until the 6 month of life. First of all we must say that supplementation should be agreed with the pediatrician and never started on its own initiative. But let's get to the point.

According to the Del Paesene guidelines for the promotion of oral health and the prevention of oral pathologies in developmental age, fluoroprophylaxis should be started starting from the sixth month of the child's life and not earlier, unless it is a child at risk. of medium-high caries. In particular, the guidelines argue that "to date, the preventive effect of fluoride after teeth come out, obtained through the way of topical administration, it is considered more effective than that obtained before the teeth arise, obtained through the systemic route of administration. "

In short, in short, the prevention of caries is carried out with the administration of toothpaste in a pea-size dose (the size of a pea) from 6 months up to 6 years of age. Fluoroprophylaxis can be done through the use of a toothpaste containing at least 1000 ppm of fluoride, twice a day.

- fluoride-based supplements, as indicated by the Del Paesene guidelines, "they must be prescribed by the pediatrician in cases of objective difficulty in the topical administration of fluoride through toothpaste or as an additional fluoroprophylaxis method in subjects at risk of caries".

In these cases the recommended doses are:

According to the Ministry of Health, it is therefore better to start fluoroprophylaxis when the first tooth appears, also because before it could be harmful. Excessive doses of fluoride, in fact, can cause the fluorosi, a condition that presents with whitish streaks on the teeth.

Read also: Caries in children: what it is and how it is prevented

When born, every newborn has a proportion of iron proportional to the duration of pregnancy. This stock is very important because it conditions erythropoiesis, that is the red blood cell formation process. It goes without saying that in a premature baby or who have a low birth weight, the need for iron is higher than that of full-term babies. In these cases, iron supplementation is indicated and should be started around 3rd month of life, about when the little one's reserves run out.

in term babies and of normal weight, iron supplementation is not indicated since breast milk (but also formula milk) already covers the baby's iron needs. As you begin weaning, remember to always introduce foods rich in iron or add this mineral, perhaps by combining a source of vitamin C that promotes its absorption.

According to the Del Paesena Society of Human Nutrition, the iron requirement in infants (6-12 months) is 11 mg/day and it is important that the child reaches the requirement because a lack of iron can slow down both mental and physical growth.

What supplements do vegan children need?

More and more parents decide to raise their children by having them follow one vegan or vegetarian diet from weaning. For some it is a risky choice, but today we know that some international scientific societies such as the American Dietetic Association have expressed themselves in favor of this type of diet, claiming that it is suitable (if well planned) for every stage of life. .

Even for children who follow a vegetable diet, the rule of vitamin D and K, but other additions may also be needed. As indicated in a study conducted by some of Del Paeseni's leading experts in the field of plant nutrition, and published in Nutrients, the potentially (not necessarily) critical nutrients are:

For this reason, parents who choose a predominantly or totally vegetable diet must be aware of food sources of these nutrients. It will be up to the pediatrician or nutritionist to assess the situation and suggest a possible supplement.

The only true vitamin that all vegan and vegetarian children need is the B12. During the first six months of life the baby will get it from the mother's milk, while later it will be taken with a supplement in drops, as indicated by the Scientific Society of Vegetarian Nutrition.

Read also: Vegan diet for children: can it be done, and under what conditions? TAG:
Vitamins in pregnancy and mineral salts ❯

Perfect baby in 10 steps: what you need to know about newborn hygiene

What is infant botulism, how is it recognized and what are its consequences?

The causes of colic

Meningococcal Vaccine B: Should You Trust?

Newborn colic and the rule of three