Weaning according to the Montessori method 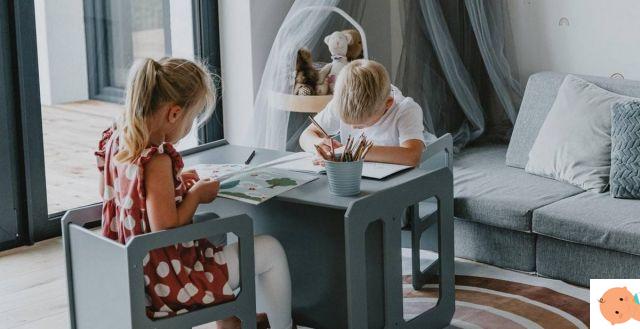 Less industrial food, recovery of traditions and more attention to food quality, but above all a different conception of the child, intended as the protagonist and director of both breastfeeding and weaning. In a nutshell, these are the indications that emerge from the volume Help me eat alone! The nutrition of children from 0 to 3 years, published for Il Leone Verde by the Montessori Birth Center. The cure is of Frank DeLuca, community pediatrician now retired, president of the Center and UNICEF trainer, to whom we had already asked for clarification on the subject of self-weaning.


The starting point of the book is the reflection that many of the indications on feeding children received in recent years from authoritative agencies such as the World Health Organization (WHO) and UNICEF are completely in line with the thought of Maria Montessori . Hence the idea of ​​promoting a diet that De Luca defines in the book responsive feeding, both as regards breastfeeding (to which a chapter of the book is dedicated), and for weaning.

Responsive nutrition, what it is and how it works

As explained in the introduction to the volume, responsive nutrition is based on five fundamental points:

Read also: Diaper: how to change it and how to remove it according to Montessori pedagogy

What are the basic principles of Montessori weaning? Franco De Luca's answer, in this podcast.

De Luca recalls that according to WHO / UNICEF solid and semi-solid foods should not be introduced into the diet of infants until the sixth month of life (and obviously the ideal for this period would be breastfeeding). Despite this, many babies start weaning earlier, in the third or fourth month.

In any case, what is really important is to observe and accompany the new development goals reached by the child, also responding to the changing of his interests. This is why De Luca insists that the term weaning should be abandoned in favor of expression complementary power supply on request.

According to the indications of the volume Help me eat alone !, it is only at the age of six months that it becomes easier to feed babies with solid and semi-solid foods because:

Read also: Weaning: how to tell when the baby is ready

Instead, they are false signals, which are not enough to start offering solid and semi-solid foods:

"With the start ofcomplementary nutrition parents have the opportunity to transmit to their little ones eating habits based on the use of foods useful for growth and for the production of energy, and beneficial to health. This is what mothers have always tried to do over the centuries, even when the availability of food was scarce ", explains De Luca in one of the chapters of the book.

"Foods tested for generations and generations in different geographical and cultural contexts were also adapted to the chewing and swallowing skills of the little ones. Taste was built on the ability to explore and recognize the flavors of the foods of one's social context and, therefore, on the possibility for children of discover slowly what the family ate".

In this sense, there are no major foreclosures regarding the food to be provided to the child. "The child can eat anything - writes De Luca - except sugary drinks and industrial sweet foods, honey before the year of life, foods that are too salty such as cured meats, French fries, foods cooked with cube and cow's milk before of the six months of life ". (Warning: there are those who believe that cow's milk is contraindicated for the entire first year of life). Obviously, alcoholic beverages and drinks containing exciting substances should also be avoided.

For this reason, weaning time should be a good time for the whole family to review their eating habits.

But beware: according to the book's indications, the fact that the child can eat (almost) everything does not mean that he must eat everything at the same time. In the preface Grace Honegger Fresco, direct pupil of Maria Montessori in one of her last courses, stresses that for the child they are fundamental order and continuity in the moment of transition between known and unknown as is that of weaning. For this it would be better to avoid too many changes all at once (of flavors, textures, posture, people, times and so on).

Read also: Vegan diet for children: can it be done, and under what conditions?

Help me do it by myself

"Helping a little one to do it on his own means on the one hand preparing meticulously the right foods and objects, on the other hand not taking the place of him in any of the actions he can do without our help" writes Honegger Fresco. So: "Don't feed him when he is able to fend for himself with food."

So, for example, "instead of putting the biscuit in his hand, let's offer it to him on a saucer and observe how he reacts: at 10-11 months he will very easily take it for himself and put it in his mouth".

It is one of the most misunderstood Montessori principles, because many interpret it as the possibility of doing anything. In reality, as Honegger Fresco explains "when Montessori speaks of it, it always refers to one to choose freely within a limit set by the adult": not just any shirt, but a choice between two of different colors. Not just any game, but one of two or three at the most, placed at its height, rather than thrown randomly in a basket.

"Even at the table you can put in front of a saucer with a little pasta (in white) and another with pieces of boiled carrot (orange). Which of the two foods will you stretch your hand towards?"

"A few clear words, to be repeated in the same way, pronounced in a voice that does not admit replies, but which, at the same time, does not express irritation or imposition. No. - Honegger Fresco writes - must have the neutral tone of the law ".

So, when the child refuses a food while showing himself hungry, the expert's advice is to try to give him another completely different one. If he also refuses this, "take away the plate with a decisive but not angry gesture (" okay, you'll eat later ") and give him nothing else, not a third or fourth proposal, as many do by stimulating the game of contradictory no". To avoid, however, the wall against the wall.

"At the following meal we will prepare him something that he will certainly eat willingly, while with the rejected food we will try again several days later. We try each time to decipher the real reasons for his refusal, without using too many words, sermons, recommendations, expressions of blackmail".

Small (big) Montessori experiences in the kitchen and surroundings

"Already around the end of the first year - writes Grazia Honegger Fresco in the book Help me eat alone! - go to the market, empty the bag of vegetables together, observe the preparation of meals, the washing of used objects, are all valid preludes to real action. And so sow or water seedlings of lettuce, aromatic herbs, carrots, cherry tomatoes or dwarf peas that end up in the dishes. It can also be done on the terrace.

And again: when the little one sits willingly at the table, with the patient guidance of the adult, he can cut with a suitable small knife boiled vegetables, mash a boiled potato, squeeze an orange and pour the juice into a glass, yespeel a hard-boiled egg after cooling it ...

In addition, around the age of two, it becomes very interesting for children wash and dry small dishes, decant from a jug or funnel, knead, mix, use a sieve... What could be better on a rainy Sunday than preparing a pizza together, with the wonder of the oven: "Watch out! You can't touch this, bring your hand closer, feel how hot it is?".

Montessori: 20 activities to do in the kitchen with children

Cooking is one of the practical activities considered by the pedagogist Maria Montessori to be very important for the development of the child. Cut a fruit, prepare a juice, wash ...

How can weaning be Montessori, the podcast

Even when it comes to starting complementary nutrition, the fundamental teaching that can be learned from Montessori pedagogy is always the same: "help me to do (to eat) alone". But how can weaning be Montessori? Franco De Luca's answer, in this podcast.

TAG:
The development of the fetus in 40 weeks ❯

Weaning children: when, how to start, methods

Weaning or self-weaning? What the science says

add a comment of Weaning according to the Montessori method