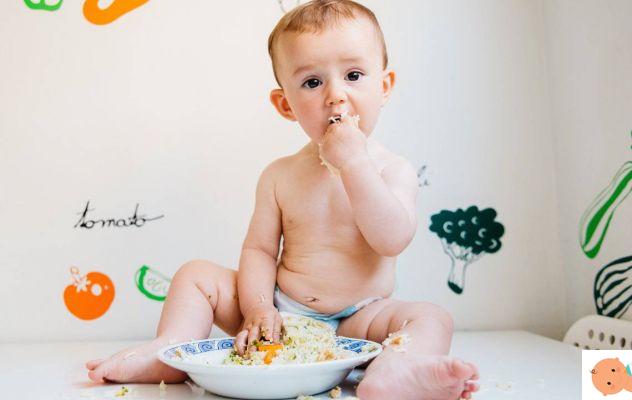 Until recently it was thought that the best way to prevent food allergies in children was to delay as much as possible the introduction of potentially allergenic foods into their diet. This is why in classic weaning schemes, fish was introduced only after eight to nine months and eggs, tomatoes, strawberries and dried fruit only after the first birthday.

In the last twenty years, however, the results of an increasing number of scientific studies have led to questioning this belief and today the recommendations have changed radically. As an article published by the American Association of Pediatricians in the journal Pediatrics recently recalled, there is no scientific evidence that delaying the introduction of allergenic foods beyond four to six months of life reduces the risk of developing food allergies or other conditions. atopic diseases such as eczema, allergic rhinitis or asthma.

Read also: Nutrition in the first months and risk of eczema, asthma and food allergies: the recommendations of American pediatricians

It is no coincidence that ESPGHAN, the European Society of Gastroenterology, Hepatology and Pediatric Nutrition, recommends propose, at the beginning of weaning, at any time after the fourth month, all possible foods, without exclusion. And our Ministry of Health also says: "The order in which semi-solid and solid foods are introduced in weaning can vary according to the preference of the child and the gastronomic culture of the family and pediatrician". No more references to particular time windows more appropriate than the risk of allergies.


Nutrition pediatricians also confirmed this to mymodernparents.com Ilaria Giulini Neri and Giacomo Cagnoli during the live broadcast on weaning: "If until a few years ago it was believed that certain allergenic foods should be introduced as late as possible, today the studies available say that, on the contrary, the late introduction of foods does not reduce the risk of allergy . So there is no need to follow particular and rigid schemes but various foods can be introduced - including fish, eggs, strawberries, tomatoes and dried fruit - according to the preferences of the family and the child ”.

Obviously, this does not mean that starting from six months (or even earlier) the baby must be "gorged" with allergenic foods one after the other: once again, it only means that there are no compelling reasons to delay their introduction well after. the beginning of weaning.

When to introduce peanuts
According to the latest recommendations from American pediatricians, there is evidence that an early introduction of peanuts - between four and six months - can prevent allergy to this food in particularly at-risk children.

It means that in children at high risk of peanut allergy (are children who already have moderate or severe atopic dermatitis or a documented egg allergy) may make sense the early introduction of peanuts themselves to reduce the risk of developing an allergy to this food as well.

"But be careful - says, head of the food allergy clinic at the Buzzi Hospital in our city - some precautions are needed. First: you must check with a Prick test that the child is not already sensitive to peanuts. Second, you must propose them to him in safe way: not whole or in pieces (due to the high risk of suffocation), but in the form of flours or spreads (the famous peanut butter) ".

However, it must be said that a lot of attention to peanuts is the result of a particular context such as the English and American one, where allergy to peanuts is very widespread (in Italy it is rare, while the most frequent food allergy in children is egg allergy. ) and some peanut-based foods such as butter are also very popular. Here, this is certainly a less felt problem.

Sources for this article: FR Greer, SH Sicherer, A Wesley Burks, The Effects of Early Nutritional Interventions on the Development of Atopic Disease in Infants and Children: The Role of Maternal Dietary Restriction, Breastfeeding, Hydrolyzed Formulas, and Timing of Introduction of Allergenic Complementary Foods, in Pediatrics, vol. 143, April 2022; M. Fewtrell et al, Complementary Feeding: A Position Paper by the European Society for Paediatric Gastroenterology, Hepatology, and Nutrition (ESPGHAN) Committee on Nutrition, in Journal of Pediatric Gastroenterology and Nutrition, vol. 64 Jan 2022;

TAG:
Weaning and self-weaning: a third way is possible ❯

Weaning: how to tell when the baby is ready

add a comment of Weaning and food allergies: when to introduce risky foods