Weaning and self-weaning: a third way is possible 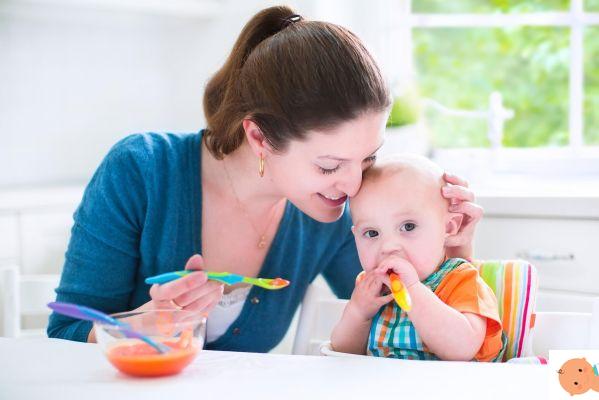 It is around six months of life of the newborn that we begin to talk about weaning. There are those who prefer to proceed with a traditional method, preparing specific meals for their child, and those who opt for self-weaning, an approach according to which the child can eat everything that the parents eat. However, there is also a "third way" that unites these two visions.

Ilaria Giulini Neri, pediatrician at the Melegnano Hospital and nutritionist at the International Center for the Study of Body Composition (Icans) explains everything.

When can weaning start?

Typically, weaning is set when the baby is six months old. However, there is a small clarification: the current evidence tells us that the child must be ready for this step, giving us precise signals. This can happen a little earlier, but also a little later than the indicated period. We can say that it is acceptable to give foods other than milk from the age of four months, but the ideal would be to continue with exclusive breastfeeding (if conditions allow) for up to six months and then switch to solid foods. .

However, breast milk or formula is the main food in the baby's first year of life. This must be accompanied by solid foods, even if there is no longer the need to follow a rigid and fixed food introduction scheme. Before, in fact, people were very careful about the allergenic power of food and for this reason the foods were introduced into the infant's diet following precise times. However, it has been found that this method is not effective in preventing allergies and therefore there is now more flexibility.


All this, however, always bearing in mind that it is good not to make too many introductions together. So: you try a new food, you propose it for a few days in a row, checking that there are no negative reactions, and then you move on to the next one.

What can be done if the child does not cooperate?

One of the ingredients of weaning is patience in proposing foods. It must always be considered that the child, accustomed to milk, at this moment switches to foods that have a completely different texture, taste and smell. So it is normal that it may have some resistance at first. The advice is to give the child time to get used to it and not to give in to his refusals.

Weaning: 50 responses from NUTRITIONAL PEDIATRICIANS to the most common doubts of mothers

Weaning, first solid foods. When to start? Can the broth be frozen? When to introduce the tomato? And the egg? Here are the most common doubts of mothers and the answers of ...

Self-weaning is a very recent trend according to which children are offered, appropriately chopped and shredded, the same foods that their parents eat.

Is there a middle ground?

Yes, there is a third way: without reaching a real self-weaning, baby food can be used, but without following rigid schemes in the proposal of food to the little ones.

What do you always need to pay attention to?

Whatever the choice, there are rules that must apply to everyone: no to protein excesses; no to cow's milk at least until the twelfth month of life; no to the use of salt and sugar in baby food and no to the use of honey.

Weaning, what are the first baby food in the rest of the world?

Sara Honegger in the book A world of baby food explains how children are weaned in various countries. Generally the first taste is fruit: apple, pear, banana, but also mango or papaya ....

TAG:
Weaning, the foods to avoid in the first 12 months ❯

Weaning, how to introduce legumes

The calendar of fruits and vegetables in spring

add a comment of Weaning and self-weaning: a third way is possible