Weaning at 4 months, the things to know 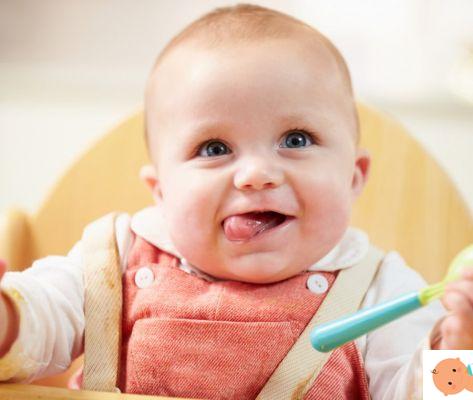 The scientific literature on the subject is clear: the ideal time to start weaning is around six months, when the child begins to show interest in foods other than milk - breast milk or formula - which he has fed exclusively up to that moment, and at the same time present all the neuromotor skills necessary to start the new adventure.

In fact, some scientific societies refer to a slightly wider window, between four and six months of age, but more and more pediatricians today believe that it is absolutely not the case to bring weaning up to four months, as it was often advised by doctors in the past.

Read also: Weaning, when to start

Weaning at 4 months: There are no medical reasons to recommend it

"In spite of habits, traditions, advice from the grandmother or other, there is no medical reason why a baby should start taking foods other than milk at four months old", the nutritionist pediatrician confidently states. Margherita Caroli, member of the board of directors of the European Childhood Obesity Group and coordinator of a new document on weaning that the Del Paesena Society of Preventive and Social Pediatrics (SIPPS) is preparing for the next congress (in October 2022).


"On the other hand, at four months many of the baby's functions - for example the kidney, gastric, intestinal ones - are not yet perfectly developed, as are the psychomotor skills, so the little one is choking hazard".

Not surprisingly, more than indicating an X time at which to trigger weaning, pediatricians today recommend pay attention to the signs that the baby is actually ready to start complementary feeding. “They are few and simple”, he clarifies Alberto Ferrando, president of the Ligurian pediatricians association and author of the book How to feed my baby (LSWR Editions, 2022):

Growth of the baby and weaning at 4 months

Sometimes parents want anticipate weaning in the belief that the child is growing little, but in reality they do not take into account some fundamental aspects in the question of growth. "For example: especially in breastfed babies (but not only), the reduction in the growth rate is a completely physiological phenomenon in the second and third month of life”Explains Caroli. Therefore it is normal for children to grow more slowly from a certain moment onwards than they did a few weeks before.

“Furthermore, parents often think that their children are growing poorly because they have children unrealistic expectations on how they will have to become ”says Ferrando. "They are used to thinking about certain chubby and peaceful infants in advertising, but there are also cricket babies always on the move, who never put on much weight".

Other times it is the pediatricians themselves who push the family towards an early weaning. It happens less and less frequently but it can still happen, and for two main reasons: either because they have remained anchored to one an outdated vision, whereby the health of the child is all about the infamous growth percentiles, or why they are using it outdated reference growth curves.

“In reality, how and how much it grows is only one of the aspects to be taken into consideration when assessing the health of a child. I always advise not to look at the kilograms he puts on, but at how he relates to others, how he moves, how he sleeps, how he plays "declares Ferrando. He also specifies that individual variability cannot be ignored: "As for adults, there are children who live to eat, and children who eat to survive and their growth will necessarily be different".

As for the growth curves, Caroli recalls that those to be used are the WHO curves, which take into account the possibility of breastfeeding. "But there are still some in circulation based on data referring to children overfed with formulated milk."

Weaning: 50 responses from NUTRITIONAL PEDIATRICIANS to the most common doubts of mothers

Weaning, first solid foods. When to start? Can the broth be frozen? When to introduce the tomato? And the egg? Here are the most common doubts of mothers and the answers of ...

Does it grow little? It is not necessarily bad!

Among other things, all this anxiety to see the child "rise" has no scientific reason and indeed could be counterproductive. “The most recent studies show that overgrowth in the first two years of life is a risk factor for the development of childhood obesity”Says Caroli. Therefore a weaning at the right times and a slow and progressive growth are welcome.

“And if poor growth is a medical problem, because there is indeed one malnutrition with insufficient protein and energy intake, the thing to do is optimize milk supply existing and indicated for the first six months of the baby's life, for example by adding artificial milk if breastfeeding is not sufficient, or by increasing the quantity of milk ".

Weaning at 4 months: can it be useful if there is a risk of allergies?

“No: today we know that there is no reason neither to postpone nor to anticipate the introduction of potentially allergenic foods”Explains Caroli. "The predisposition to allergy exists independent of the moment in which weaning is started". The latest confirmation comes from a study recently published by the American Association of Pediatricians in the journal Pediatrics:

"There is no scientific evidence that delaying the introduction of allergenic foods beyond four to six months of life reduces the risk of developing food allergies, eczema, allergic rhinitis or asthma"

The case of gastroesophageal reflux

“Even in the case of reflux, there is no need to suspend milk feeding in advance” concludes Ferrando. “Eventually there are special formulas that can be used in these circumstances ".

Weaning, what are the first baby food in the rest of the world?

Sara Honegger in the book A world of baby food explains how children are weaned in various countries. Generally the first taste is fruit: apple, pear, banana, but also mango or papaya ....

TAG:
Weaning children: when, how to start, methods ❯

Weaning: how to tell when the baby is ready

add a comment of Weaning at 4 months, the things to know