Weaning, how to prepare the first baby food 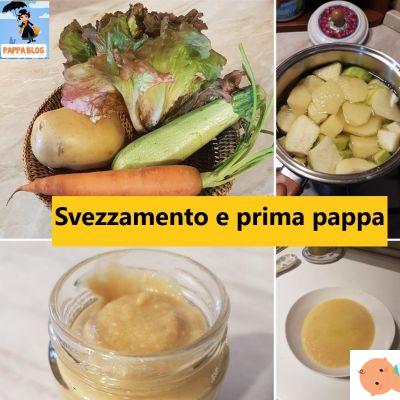 The first thing to do is to prepare the vegetable broth. Ingrediants: 1 baby carrot, 1 onion, 1 small courgette, 1 ripe tomato.


The gruel thus obtained is seasoned with 1 teaspoon of extra virgin olive oil (no salt for the entire first year of the child's life!) It is advisable to introduce one cereal at a time (starting with corn + tapioca, which is the least allergenic), and wait 2-3 days before changing type.

This gruel can be given to the baby for the first 15 days.

Better to wait to add the grated cheese to the porridge. “Parmigiano Reggiano or Grana Padano contain a large amount of salts and proteins” underlines the nutritionist pediatrician. “There is well-founded scientific evidence that the excessive intake of proteins during the first year of life is responsible for causing obesity at a later age, since the protein load would cause an increase in the number and volume of fat cells. In an infant who takes artificial milk (already in itself more protein than mother's), dangerous as well as uncontrolled 'sprinkling' of these precious and delicious cheeses should be avoided! "

THE CHOICE OF VEGETABLES Vegetables play a decisive nutritional role for the richness in mineral salts, antioxidants and vitamins increasingly present in the "hit parade" of dietary recommendations. In the first meal there are already four. Here are their properties:


In addition to onion, inulin is contained in chicory, banana, asparagus, garlic (this is why in case of diarrhea we recommend the banana, which additionally provides potassium, a mineral that is lost during diarrheal episodes) " .

Better to avoid vegetables such as spinach, chard and lettuce until one year of age. “Certain vegetables are in fact particularly rich in nitrates” notes Miniello, “natural products of degradation which in the stomach are transformed into nitrosamines, substances that are dangerous for the health of the infant. Attention also tomineral water! It is not enough that it is low in mineral content: it is advisable to check in the composition expressed on the label that the quantity of nitrates is less than 10mg / l.

In the first meals, it will be good to avoid the potato, since it contains solanine, a toxic substance that is neutralized only by ripening, often not yet completed in the potatoes we find on the market ”.

Watch out for honey!

It is certainly an excellent food from a nutritional point of view, however its introduction must be postponed after one year of age. In fact, honey is one of the culprits of infantile botulism, a serious food poisoning sustained by various species of Clostridium.

The spores found inside can vegetate and produce, in the still immature intestine of the infant, the dangerous botulinum toxin (the same that can develop in canned food prepared incorrectly). That's why the main guidelines advise against it before 12 months.

This article is part of the Weaning Guide

add a comment of Weaning, how to prepare the first baby food