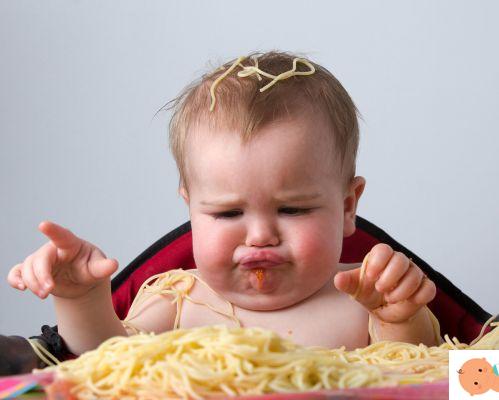 Food everywhere: on the hands, on the face, even behind the ears, not to mention the high chair and floors. It is a scenario well known to parents of little ones struggling with their first meals, but now there is a good reason to rejoice rather than put your hands in your hair: according to some psychologists at the University of Iowa, in fact, the most bungling children at the table they are also those who learn a particular type of words faster, those referring to objects of liquid or semi-solid consistency.


It was already known that children learn the names of solid objects more easily, which do not change shape and size. With liquids or with somewhat shapeless materials, however, the matter becomes more complicated. The hypothesis of the researchers was that learning these names becomes easier if the little ones have the opportunity to experience materials of this type in a familiar setting.

And what better situation than feeding time in the high chair? Well, the scholars have approached some 16-month-old babies with a series of foods or drinks, associating each with an invented word (to avoid them being influenced by previous learning).

After a minute, they asked the babies to identify the same foods arranged in different portions and shapes, which they could manipulate freely. Result: the children who "interacted" the most with food - thus getting more dirty - were the ones who most easily identified the food. In short, a good reason to let them do it.

With some teaching, a little patience, and a little time, anyway, even the most bungled will learn how are you at the table. After all, children enjoy imitating their parents: if the grown-ups behave well, they too will soon succeed.

add a comment of Weaning, the bungling baby learns first