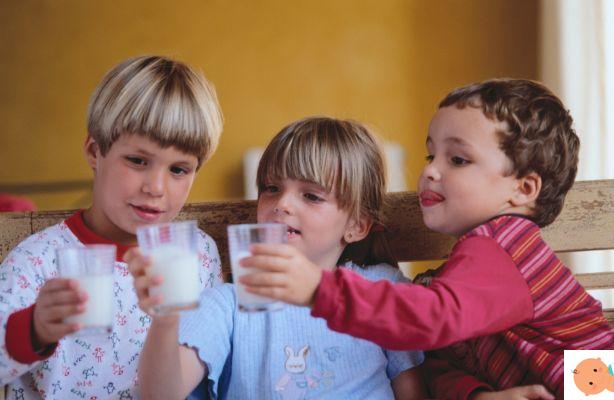 What milk to give to the baby after one year of age? What to do if the baby refuses milk?

After one year of age, if you have stopped breastfeeding, is it better to use a "growth milk" instead of normal dairy cow's milk?

EFSA, the European Food Safety Authority, which is the most accredited body to determine whether a food is useful and not harmful, last year (2022) published a document stating that there is no need to use growth milk after the baby is one year old.


This means that, with very rare exceptions, all children from 12 months onwards can safely drink, if they show they like it, dairy cow's milk without the risk of lower nutritional benefits than those they could count on if they took a growth milk. But it is obvious that this is the case: a child of one year or more eats everything and if his diet is varied there is no reason to think that he needs a different milk from that of the rest of the family.

Growth milk is enriched with iron. This is the characteristic that is used to suggest that it is better than the dairy one, which is poorer in this substance. How are things really?

In the same document and then in another, published in 2022, the EFSA group of experts analyzed the nutritional status of European children under 5, putting together all the research on the subject published in recent years. These complex reviews of the scientific literature have shown that children generally introduce too much protein, too much salt, too much potassium and too little fiber.

Instead, they take in all the other micronutrients useful for the well-being of the organism, with the exception of iron and iodine. Given this, real iron deficiencies are found only in some Eastern European countries. Furthermore, even if there were iron deficiencies in the diet, what is interesting to know to determine if it is necessary to increase its administration is whether this deficiency has consequences on health, that is, it causes iron deficiency anemia (due to lack of iron). But this is not the case.

Isn't the hypothesis that it is better to give milk enriched with iron based on the fact that our children are often affected by anemia?

The data we have available tells us that in Western European countries, including the country, anemia is not a problem. This does not exclude that there are (few) children at risk of developing it, but to avoid this possibility it is not necessary to resort to milks enriched with iron. It is sufficient, in fact, that the child's diet is varied and includes foods naturally rich in iron such as fish and meat or enriched with iron, such as cereals. Growth milk is not on the list of products to be favored.

In fact, there are no studies to support the benefits of administering iron-enriched milk. In the absence of evidence, the claims widely used for the sale of these products generically emphasize that "they are better than cow's milk". However, they are only opinions, even if they are sometimes supported by some so-called "nutrition expert".

In reality, to be able to say with certainty: yes, after one year of life it is preferable to use milk enriched with iron, it would be necessary to have what we do not have for the moment: results obtained through serious experimentation independent of commercial interests. It must also be said that indiscriminately offering all children foods enriched with iron could open the way to other risks, linked to the excess of this mineral. There are studies showing that too much iron can weaken the immune system, making the baby more vulnerable to some infections.

Is it therefore possible to switch from mother's milk to dairy milk without an intermediate phase?

It depends on the age of the child. If he has already completed the year of life, cow's milk can be offered immediately. If the baby is not breastfed (which is by far the most recommendable choice) after six months it is preferable to use "follow-on milk" or, if the baby was already fed with milk 1, you can safely continue with the same milk.

It should be emphasized that, according to the latest recommendations of both the European Commission and the WHO (World Health Organization), the ideal would be for the baby to be exclusively breastfed for up to six months. Thereafter, the guidelines encourage breastfeeding "up to two years and beyond, according to the wishes of mother and child".

Each mother can therefore decide to continue to give her child her own milk, even after the introduction of solid foods, without having any fear of exposing him to nutritional deficiencies. This also applies if the child does not take any derivatives of cow's milk, that is, yoghurt or cheese.

And if a baby, after breastfeeding, no longer wants to take any type of milk, do you still have to resort to some expedient to get him to introduce it?

It is not needed. Cow's milk is not an indispensable food, even if it belongs to our history. Precisely because it is part of our culture, it is okay to offer it, as it has always been done, but it is not mandatory. To support the importance of the food tradition are precisely the most recent guidelines, shared by the entire international scientific community, according to which it is correct that a child is fed according to the culinary customs of his family.

But if the baby himself refuses the milk, it is not at all necessary to find a way to give it to him anyway. Yogurt, various cheeses and ricotta are possibly good alternatives. And if he doesn't want these either, it is better not to insist or to puzzle over to find recipes that mask them. Two thirds of humanity lives and thrives without eating milk or dairy products.

Apart from milk, can you tell us roughly what feeding a baby should be like from weaning onwards?

The child should eat what other family members eat. Sometimes it is objected that following this indication may be impossible, given that parents often "eat badly" or, in any case, not suitable for children: canned foods, too much animal fats, fried foods and so on.

In fact, the arrival of a child in the home should be the best opportunity for the whole family to change the way they eat, opting for a healthier diet. For example, to start reducing table salt and white sugar, to limit the consumption of animal fats and to favor the intake of fruit and vegetables. That is, parents and children should follow the same simple, varied and healthy diet for the benefit of everyone's health.

Read also the Nutrition after weaning

TAG:
Which milk to choose for the baby? ❯