What mouthwash can be used in pregnancy 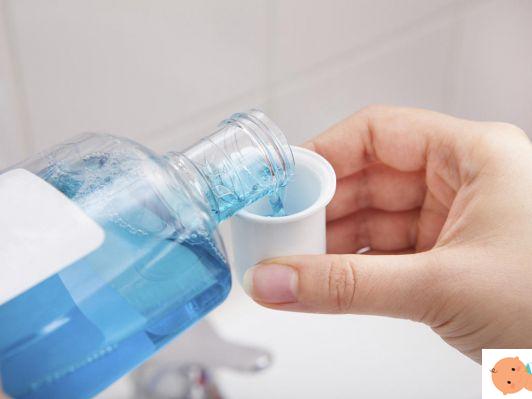 Expecting a baby can place several limitations on the expectant mother. Nothing serious, in most cases: some food to avoid, no alcohol, no dangerous sports. But when it comes to hygiene, it could be a problem. For example, you can use the mouthwash in pregnancy?

During the nine months, particular attention was paid to certain aspects: the many analyzes, visits, ultrasound scans, weight control, dietary restrictions. But we must not forget about other equally important aspects of oneself, and we certainly do not talk about the hairdresser (also because in pregnancy you often have beautiful hair!). We are talking for example oforal hygiene, which could be neglected for the benefit of other treatments. Absolutely wrong! It is especially important to take care of oral hygiene during pregnancy e nursing because it is proven that women can develop more problems during this period odontostomatological.

This increase in problems inside the mouth mainly affects the gingivitis, so the gum bleeding, but also some tooth sensitivity. We must not underestimate any symptoms related to the teeth and mouth in general because, if periodontitis develops - a bacterial infection of the tissues that support the tooth - you could lose teeth and also have consequences on a future search for a child.

There are several reasons, above all hormonal and linked to the increase in blood circulation, which they can cause dental problems and in the mouth during pregnancy, even bringing pyorrhea. Do not neglect oral hygiene by using dental floss and brush after each meal.

Mouthwash in pregnancy: can it be used?

It is good to dispel a myth: the mouthwash in pregnancy it is absolutely allowed and it is also recommended, as always. It must therefore be used together with a brush and dental floss.

Read also: Teeth and pregnancy: 7 things to do immediately to avoid problems

Which mouthwash in pregnancy

Although it is possible to use mouthwash in pregnancy, it would be better to choose based ones fluorine and free of alcohol. Also, the one based on should be avoided chlorhexidine, unless prescribed for medical reasons by the dentist, although so far no studies have shown teratogenic evidence in pregnancy.

Gums that bleed in pregnancy

Due to the changes that the mother's body undergoes, the gums can then bleed more often. It is not necessary to use a special mouthwash, but rather it is good to check if proper oral hygiene is carried out because plaque increases the risk of bleeding. If it seems to you to to wash teeth correctly (better with an electric toothbrush), try to talk to the dentist, you may need one professional cleaning to eliminate bacterial deposits from the gums.

It is perfectly fine to assume fthey are pregnant, especially inside mouthwashes. When you buy it, therefore, check that the ingredients do not include chlorhexidine and alcohol but rather fluoride (which can also be taken through toothpaste).

Avoid following advice from DIY mouthwashes, especially based on essential oils. Always ask your dentist or gynecologist before trying any home remedies.

L'oral hygiene during the 9 months it is especially important because the expectant mother is more subjected to gingivitis and dental problems. Use the mouthwash in pregnancy it is an excellent habit to combine with the use of a brush and dental floss.

Recommendations for the promotion of oral health in perinatal age

TAG:
What milk after 12 months and what to do if she refuses milk ❯

add a comment of What mouthwash can be used in pregnancy