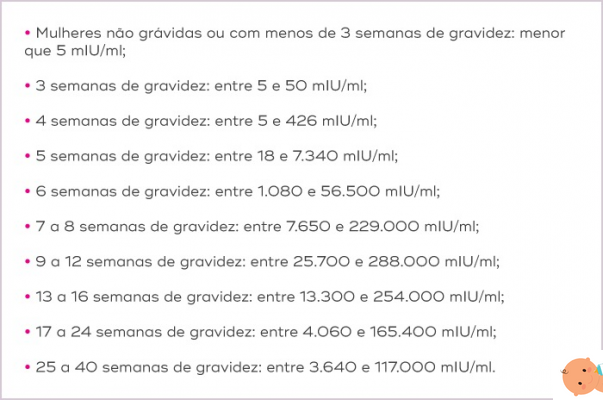 Beta hCG: what it is

In the pregnant woman one of the hormones most important is the Beta hCG - Human Chorionic Gonadotropin. It is precisely this hormone that determines the positivity of the pregnancy test. The Beta hCG it is produced by the trophoblast, a tissue that will subsequently transform into the placenta. If from the blood tests, the value of this hormone increases daily, the pregnancy is progressing well.

Pregnancy begins with the conception, that is, the moment when the spermatozoon meets the mature egg in the tube and fertilizes it. The fertilized egg is then transported to the uterus by the hair cells that make up the inner walls of the uterine tube. The egg remains suspended in the uterus for a few days and then makes contact with the uterine wall. The endometrium modified in the second part of the cycle (softer and richer in vessels) favors thenesting, whose epoch corresponds to 7-8 days after fertilization. The fertilized egg in these days has grown and multiplied its cells and has passed from the stage of morula to that of blastocyst.

Beta hCG: what is it for in pregnancy

The presence in the blood and urine of Beta hCG it is indicative of conception and the onset of pregnancy and is revealed by both blood tests and pregnancy sticks sold in pharmacies. That's why the Chorionic gonadotropin it is commonly referred to pregnancy hormone.

La Beta hCG contributes to the changes in the maternal organism that occur during pregnancy, which are essential for the success of the pregnancy itself. In particular, it performs the following fundamental functions:

Read also: Pregnancy test: how and when to do it

Beta hCG: when it is produced

The specific pregnancy hormone is produced around the 21-22th day of the cycle, but only if you have a regular period and ovulation occurred on day 14. If theovulation nidation also took place later, and subsequent pregnancy hormone production will occur later.
Based on the dosage of Beta hCG in the blood, it is possible both to reveal the occurred conception, both the week of gestation, and the presence of one twin pregnancy. Regular growth throughout the first quarter is a sign of a good continuation of gestation. If all goes well, in fact, the concentration in the blood of this hormone increases a lot in the first trimester and, especially in the first weeks, it tends to do so very regularly, doubling roughly every 2-3 days.

The range of possible values ​​of the beta-hCG from week to week it is very large, and it is precisely for this reason that today this data is considered of little use in the precise dating of a pregnancy. For a non-pregnant woman, blood beta-hCG values ​​are typically less than 5 milliunits per milliliter. Values ​​above 5mlU / ml usually indicate one ongoing pregnancy.

Read also: Placenta: what it is, when it forms, what is it for, what happens if it works poorly

Immediately after conception begins production of Beta HCG, essential for the development and good continuation of pregnancy. In fact, it stimulates the dirty body, (which is the modification of the follicle after ovulation) to produce large amounts of progesterone which serves to keep the uterine muscles smooth and relaxed in order to allow a good engraftment of the pregnancy, work in synergy with estrogens to stimulate the walls of the uterus to increase their development.
Beta hCG is detected by municipalities pregnancy test do it yourself that you can buy at the supermarket or pharmacy. In these cases, the detection is made on the urine: as soon as its production begins, in fact, the hormone first passes in blood - where it can be detected as early as 7-10 days after conception - and after a few more days it is disposed of in the urine.

When to do Beta Hcg

The production of the hormone Beta hCG increases until the end of third month of gestation, and then descend and remain stable until delivery. So usually a blood draw is prescribed with dosage of Beta after the home pregnancy test came back positive. However, it is good to know that not all gynecologists prescribe beta e it is not an indispensable examination. Furthermore, the beta dosage allows the diagnosis of pregnancy to be made a few days after missed menstruation (5-7 days) and is also used to urgently identify extrauterine pregnancies at an early stage.

The trend in the value of Beta hCG growth of this type follows on average:

If the growth in values ​​is particularly high, it could be one twin pregnancy, but as we have said, each pregnancy is unique and a high value could in any case also correspond to the gestation of a single embryo.

Read also: The calculation of conception: how to do it

Beta hCG - Human Chorionic Gonadotropin is one of the most important hormones in the early period of pregnancy. The value of this hormone determines the positivity of the pregnancy test. Beta hCG is produced by the trophoblast, a tissue that will transform into the placenta as pregnancy progresses.

When can Betas be held?

Production of the Beta hCG hormone increases until the end of the third month of gestation and then slowly decreases. Therefore, a blood sample with a beta dosage is usually prescribed after the home pregnancy test is positive.

What values ​​must the Betas have to be pregnant?

TAG:
When to take a pregnancy test ❯

add a comment of When Beta hCG enters the circulation