When do babies start talking? 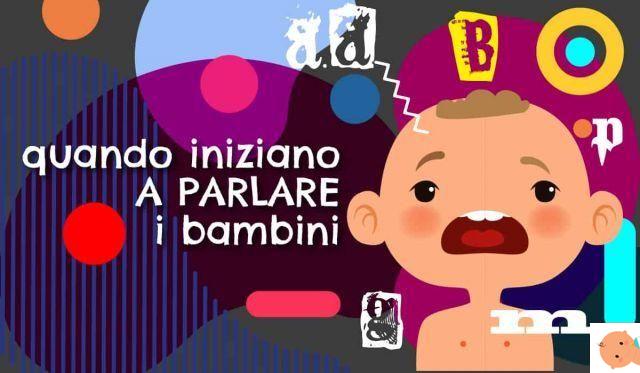 When the baby starts talking

The stages of children's language

At two months: they understand the melodies.

At about two months, the little ones are still unable to express themselves clearly, but they begin to understand the melodies of the language. They understand if dad is happy or sad and notice when someone speaks in their mother tongue.

At six months: the babbling.

Hearing well is an important prerequisite for the second phase of babbling, which begins at about six months. Here, too, all possible sounds are produced. but they are arbitrary only in appearance. Children compare what they say with what they hear. Some sounds are selected and from now on Del Paeseni "play" from Del Paeseni and the Chinese from Chinese.

Nine-12 months: the syllables are doubled

Between the ninth and the twelfth month, from the first confused babble, the little ones begin to double the syllables: ma-ma-ma, pa-pa-pa, gugu.

Equally important for the child's learning is now the "triangular eye contact". The little one plays with the ball, looks at the ball, looks at his mother. What does it mean? "Please tell me what's the name of that thing over there."

Children want to hear the big speeches, they want to know something about their world.

Read also His first words e The child learns to speak: the stages

The first word around 12 months

Teresa, one year, after a holiday on a farm with grazing cows, keeps repeating: "Muuuuu"

It happens around the first birthday: the little one rewards parents with the first word. Teresa, a little girl who lives in the city, is so fascinated by the holiday on a farm that from one day to the next she greets everyone, people and animals, with an enthusiastic "muuuuuu". For Paolo, who is always hungry, the first word was "paata" (pasta).

Having overcome the obstacle of the first words, linguistic development seems to explode. The little one becomes a collector. As others collect stamps, he does it with words. Mom, dad, ball, bau bau, brum brum, tutu: he imitates what you say to him. He has learned to turn the pages and leafs through the books with the pictures entranced, points and looks in anticipation: "I want to know what this is!".

But when is it really time? When should a child be able to tell a dog from a cat without problems, from a linguistic point of view? And why does the neighbor's child, who is smaller, speak like a train while our little one doesn't say a word?

Because each child is different from the other. A few examples from the statistics? There are "little geniuses of language" who manage to reach the goal of three words already at ten or eleven months, the later ones have to turn 21 months. Some children use a new word every two days, others memorize concepts: for weeks nothing happens and then suddenly a cascade of words comes out of their mouth.

Giovanni has made progress in the past month. Alongside the animal noises he has also put the noises of tools in his repertoire: now he is able to imitate an electric screwdriver. And she has expanded her vocabulary with "brum brum" and "tata" or "tato".

Read also: The first words of the child TAG:
When does the embryo become a fetus? ❯

add a comment of When do babies start talking?