When does a newborn start smiling? 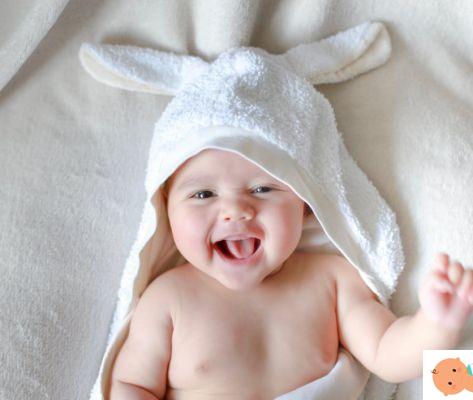 Newborn smile: when does it start and what it means

One of the most exciting times for new parents is when their baby starts to smile. But is it a deliberate or involuntary gesture? Here's what you need to know about the newborn smile.

Many new parents fear they won't notice their baby's first real smile, but rest assured: i first smiles generally they are not what we imagine, but more or less unconditional reflections. You may have noticed that your child also smiles while he sleeps, right? We often talk about "smiling at the angels": but it is easy to recognize a real smile from an uncontrolled manifestation!

When the baby starts to smile

Studies have shown that mothers smile a lot at newborns in their first hours of life: babies are sponges, and they learn as soon as they are born. For this reason it is easy to understand how the smile is not a completely involuntary reflex, but an attempt at imitate parents, and especially mom, when they see it is happy.

In the first month of life, therefore, it is possible that your baby smiles for various reasons: muscle contractions, imitation, uncontrolled reflexes. For this reason infants they smile even while they sleep, because precisely the muscles contract without realizing it. But when do they really start smiling?

The real smiles of the newborn: the social smile

It is not yet clear, therefore, if the first smiles of the newborn can really be called that, but what is certain is that they melt parents, grandparents and anyone who sees them.

The so-called social smile, that is, the conscious one, which is emitted to express a specific emotion or feeling, arrives in second month of life, between 6 and 8 weeks. At that point the child first of all sees much better: he can look people in the eye, widen his mouth and, often, even laugh when stimulated. The social smile comes in response: to other smiles, to an animal, to a game, in short, to everything that gives pleasure, as an imitation of what is observed every day with adults.

How to recognize the "real" smile

It is not difficult to distinguish a real smile from involuntary ones, perhaps caused by one muscle contraction. First of all, it is generally in response to an event: whether it is the appearance of the mother or father, someone else's smile, the entrance into the bath water, the end of the feeding ... Moreover, when a newborn smiles really it does not he does only by moving his mouth, but also by contracting his cheeks and smiling with his eyes.

Ultimately, if your child moves his mouth to mimic a smile in the first weeks of life, it doesn't necessarily mean it is aware of what he is doing, but when he begins to accompany the smile to the movement of the whole face there are no more doubts!

What if my child doesn't smile?

But when the weeks and the child does not smile, many parents may be concerned: there are many stories about the social skills of little ones, and in particular about the ability to smile and keep their eyes. Remember that each child follows their own development and above all it has its own character: not everyone smiles and laughs at the same age, because growth is influenced by many factors. Talk to your pediatrician, he will be able to reassure you about the stages of your baby.

Il smile of the newborn it has long been thought to be completely involuntary, but it is not always an unconditional reflex. Already from the second month of life, the little ones begin to develop the so-called social smile to show positive feelings and emotions.

TAG:
When does the labor start? ❯

add a comment of When does a newborn start smiling?