When does nausea start in pregnancy? And when does it end? 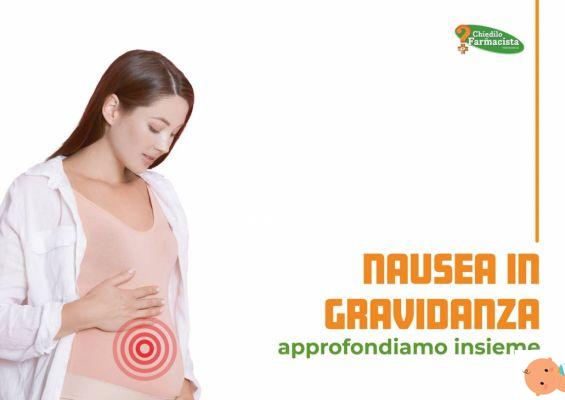 La nausea in pregnancy it is much more common than you think. According to the most recent data, only one in four women would not experience this discomfort. But when exactly does pregnancy nausea start and how long does it last? And when does it end? Let's find out more about it.

Nausea in pregnancy, when it starts

According to estimates they would be at least 50-90% le pregnant women affected by nausea in pregnancy. The intensity of this disorder varies from person to person.

According to the American Gynecologist Guidelines, only one woman pregnant out of four never experience these symptoms, while another in four suffers from nausea and even one in two from nausea with vomiting.

It is possible to say that those who suffer from nausea during pregnancy feel the first symptoms very early: even as early as 7-10 days after the missed menstruation, and in any case before 9 weeks.

Nausea in pregnancy is called "morning sickness" because it often shows up in the morning, even though it may come after meals and at bedtime.

According to a recent study byUniversity of Warwick nausea and vomiting would just start three days later conception for most women.

The researchers took as a reference, for the onset of symptoms, the ovulation date of each woman examined and not the last menstrual period. The study showed that pregnancy symptoms would appear much sooner than you think.

Nausea and vomiting, which usually end by 12-14 weeks of pregnancy, are experienced by most pregnant women, although some experience them more severely, as is the case with hyperemesis gravidarum. Over time the cause has often been perceived as psychological, but this study reinforces the already established view that the cause is biological and linked to a specific stage of pregnancy development.

In particular, researchers from the Warwick Medical School and the Department of Statistics at the University of Warwick drew their conclusions from a set of data collected at the Clearblue Innovation Center by SPD Development Company Ltd. The results were published in the BMC Pregnancy and Childbirth journal. The scientists used data from the daily symptom diaries kept by 256 women in pregnancy, comparing the onset of symptoms of nausea and vomiting with the date of their last menstrual period and with the date of ovulation.

Research has shown that nausea and vomiting begin earlier than stated in studies prior to this, and that using the ovulation date as a reference reduces the length of time symptoms begin to appear. three days (compared to 11 days identified if the last menstrual period is used as a reference instead).

Nausea in pregnancy, when it ends

The peak of nausea typically occurs around 12 14-weeks, corresponding to the peak of the HCG hormone.

Nausea usually ends by the end of the fourth month and only a few women continue to have it in the later months of pregnancy.

add a comment of When does nausea start in pregnancy? And when does it end?