When does the baby roll over onto his side or back? 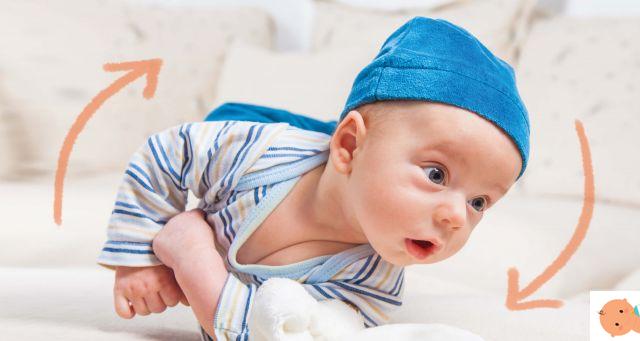 The first movements of the newborn: turn on their back

By the time the baby has learned to control his head, his arms will likely be strong enough for others to learn quickly movements. The first of all will be turn onto your back or side. When the baby is supine, placing the foot on a support surface, he will be able to control his head, extend the trunk and make a rotation that brings him to the prone position. This conquest typically occurs between 4 and 7 months.

Nanna and babies: joys and sorrows. Sometimes there are babies who sleep at night immediately after birth. On the other hand, most children succeed towards the end of the first year of life. All in ...

When does the baby learn to turn over on his back or side?

The baby may be able to push himself with his foot in such a way turn on your back already at the age of 4 months. However, it may need to be around 5 or 6 months to move from the supine to the prone position, because he needs stronger neck and arm muscles to perform this maneuver.

How does the baby learn to turn over on its back or side?

Around the 3 or 4 months, when placed on his stomach, the baby will begin to lift its head and shoulders, using your arms for support. It is an important and extremely tiring movement because it allows him to strengthen the back muscles (especially the trapezoid), essential for turning around.
Around sixth month, placed on his stomach, he should be able to give himself the push to get on his back and vice versa. The first few times it will be difficult, but once you become familiar it will never stop! At this stage, never leave him alone on the cot or changing table.

While some infants adopt rolling as their primary means of getting around, others skip it altogether and move on to sitting and crawling around the room by crawling on the floor. As long as the child continues to acquire new skills and shows an interest in moving around and exploring his environment, don't worry.

Read also: The newborn does not want to sleep on his stomach

You can encourage your child's new skills through the game. If you notice that he loves to roll, try swinging a toy next to the side he wants to turn on. Or lie down next to him on one side and see if he will try to turn around to get closer to you. Applaud his efforts and smile!

If at 6 months the baby hasn't understood how to turn or roll and hasn't moved on to sitting but continues to crawl on the floor, talk to your pediatrician.

I children develop motor skills differently, some quicker than others - and some babies never manage to roll over. Keep in mind that premature babies can achieve this and other milestones after their peers.

Read also: When the baby sleeps, he always turns on his stomach: is it dangerous?

After the baby has learned to sit, what are the prospects?

The newborn has developed muscles in the legs, neck, back, and arms as he learns to roll over onto his back or side. He will now set the same muscles in motion as he learns to sit independently and crawl. Most babies learn to sit between 6 and 8 months; thereafter she begins to crawl.

How should the baby sleep?

The belly-up (supine) position protects against "cot death" or SIDS. For this reason, parents are advised not to let the baby sleep on his stomach or on his side, but rather on the back, on a firm mattress without a pillow.

Tips to reduce the risk of SIDS

Parents can implement some preventative behaviors:

References for this article:

What is an exercise to strengthen the baby's neck?

Place the baby on his stomach lying down. Stand in front of him and try to get his attention to make him lift his head. This is a very important exercise for strengthening the neck muscles.

What milestone does the newborn reach at 6 months?

TAG:
When does nausea start in pregnancy? And when does it end? ❯

add a comment of When does the baby roll over onto his side or back?