When the child always wants to be the center of attention 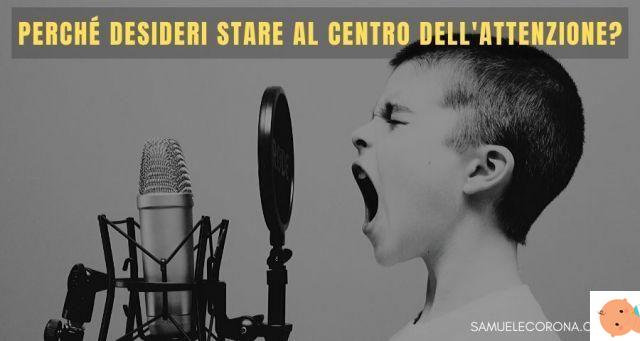 When the child always wants to be the center of attention

Whining, thrown objects, constant requests: your child always tries to get your attention with inappropriate behavior? Here's how to deal with the so-called "Attention-seeking behavior" with 8 practical tips of the pedagogist Laura Mazzarelli, co-author of the book "Instead of saying ... Try saying. Words to educate children with loving firmness" (Mondadori, 2022).

The need for attention is normal

«The need for attention - said the expert - is a natural need of the human being and not only of the child. A person exists if she is looked at and thought about, if she feels welcomed and understood. A newborn calls attention by crying to express their physiological needs and we respond immediately, then a 3-year-old can't? At that age he only knows that way: he cries, screams, bangs objects, throws a tantrum. He does not yet have the metacognitive faculty for express his need, and it is here that the adult must intervene, to read it and welcome it ».

Read also: How to handle an oppositional child

My daughter always wants to be the center of attention: listening and dialogue

The parent's task is to read the need that the child is expressing with his behavior: "It is essential to establish a good relationship based on dialogue and listening, to accompany him to have the certainty of not being abandoned. Thus, for example, he will no longer need to scream to fill the space of himself: once the presence of the parent is internalized, the child knows that he is there and calms himself ».

In this way, behaviors that seek attention decrease and do not turn into negative attitudes. "If, on the other hand, a positive relationship has not been established on this, the risk is that for example your child will begin to engage in inappropriate behavior in public, because he understands that there you are more blackmailed and vulnerable. And above all, he could continue even during his growth in an inappropriate way of expressing his needs, then running the risk of becoming a spoiled adult who thinks that the world revolves around him ".

Read also: The 3-minute rule for establishing a true dialogue with your children

Ignore the behavior, not your child

If the parents' task is to understand their children's need for attention, certainly the solution is not to ignore them: «'If it draws attention, ignore it' collides precisely with the need that the child is trying to express. On the other hand, every human being in order to place himself in the world needs the consideration of others. The parents' choice to ignore is more of a form of defense, which assumes that if you pay attention to your child even when he does not ask politely, you appear to be weak and to spoil him. However, authority is not obtained by coercion or by not giving attention, on the contrary: it is obtained by raising your child not with fear but by listening to his true nature. Which does not mean giving in to permissiveness ».

Il therefore the adult's focus must be on the child itself and not on behavior: «Many confuse their behavior with the child and even verbally affix the labels of judgments that over time become his identity, this does not help him improve: is your child" capricious "? No, he's "playing a whim". '

Children understand if they are really listening to them or not: «Let's get them used to our full, authentic and profound attention. For example, let's not look at the phone in the meantime! 5 minutes in which we are really there with them 100% are worth more than 1 hour of listening distracted and maybe even a little impatient ». Effective listening is the prerequisite for effective communication. By listening we do not mean a moment of silence in which the other speaks and we are silent, listening is not the time of speaking: we listen not only with the ears, but with the mind and above all with the heart.

Focus on the positive

Also 'esteem calms the exaggerated anxiety of attention: «In addition to daily positive reinforcements, we learn to remember their qualities even during a moment when they seek your attention:" You can do many things, you know how to be so good and why are you doing this now? Tell me what you need "." When someone comes to us starting from the recognition of what we are and our qualities, they certainly prepare us for a different listening and availability.

Read also: Self-esteem in children: 5 phrases to NEVER say to your children

«A child is not happy to cry or scream, on the contrary at that moment he is also very ill - recalls Mazzarelli - And he knows that certain things are better not to do them. Nobody wants to be a heckler. Because of this, if we can lead him on an alternative route, he will willingly follow us: let's bring him back in touch with what he wants to be, that is, adequate, useful. So let's channel that energy into a positive gesture, for example by asking him to help us with a matter instead of kicking a table ». It is much more effective than putting him in detention: “Perhaps momentarily we will have freed ourselves from the annoyance by suffocating the behavior, but we will have only put a lid on a pressure cooker that sooner or later will blow. Instead let us remember that the passage must always be from his inappropriate gesture to our authentic listening ».

Confront him with the consequences

With slightly older children, you can start talking about cause and effect: “Confront them with the consequences of their behavior. It is also a way to enhance them in a dialogue that considers them capable, as they actually are, of reasoning. "So you get hurt and you risk breaking that object"; "If you continue to interrupt the call, it will last longer and you will have to wait a little longer because I will listen to you." Instead of saying "stop", in short, explain to them what is happening. For example, when he keeps interrupting you during a phone call stop for two minutes, look him firmly in the eye and let him perceive the importance of respecting this moment when you are engaged in something else, reassuring him that at the end you will dedicate yourself to him: they will be enough to appease the child ".

Reread what happened with him

Also from 5 years old, you can face a crisis not only immediately but return to it later: «At that age he is able to remember what happened during the day. Before going to sleep, for example, when the crisis has dissolved and the "emotional temperature" has dropped, you can go back to that particular episode: it will be another moment of dialogue, in a calm moment of the day and far enough away from what happened, to strengthen the bond with him and cheer him up in view of any future episodes. It will also serve him to begin to recognize his emotions and name them ».

Laura Mazzarelli, she is an educator and co-author of the book "Instead of saying ... Try saying. The words to educate children with loving firmness" (Mondadori, 2022). Her site is ilcamminopedagogico.com

TAG:
When the child wants to arrive ahead of time: what to do? ❯