When the child scolds the parents 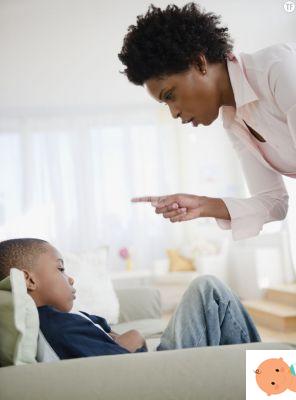 When the child scolds the parents

Rules, scolding and containment are part of daily family life and a healthy relationship between parents and children. But if it is the child scolding dad and mom? It is an eventuality that always amazes and displaces parents, sometimes because it worries and at others because it arouses amused curiosity. What do children want to tell us with their "rages" and how should we behave in front of them? He talks about it there pedagogist Laura Mazzarelli.

Why does a child scold parents 3-6 years old

"We often see scenes in which a child scolds his parents - begins the expert - and this should not surprise too much". Babies do this for at least 3 intertwined reasons:

Why does a child scold parents 6-12 years old

If already around the age of 4-5 some children scold their parents also because they are already developing a sense of ethics and justice, it is from 6 years of age that, with the progressive development of the neocortex, the awareness of one's emotions. «The reasons for the reproaches therefore move more on the cognitive level, to externalize differences of views or to question some rules. From the age of 8 they begin to oppose more and react to what they perceive as injustices ».

This happens for two reasons:

My son scolds me: is it okay or is it a problem?

Is a child who scolds mom and dad a symptom of a healthy relationship or a failure to recognize the parental role?

Read also: How to educate children who do not listen: the phrases to use

What to do when the child scolds parents 3-6 years

If a kindergarten child yells at their parents, this can be done as follows:

Read also: How to handle an oppositional child

What to do when the child scolds parents 6-12 years

In elementary school, the good work done previously will benefit: «If the relationship is based on confrontation, the child knows that he does not need to shout to be heard. If, on the other hand, you provide him with an enemy to oppose, he will oppose. '

Laura Mazzarelli is an educator and co-author of the book "Instead of saying ... Try saying. The words to educate children with loving firmness" (Mondadori, 2022). She takes care of her own blog entitled "The pedagogical path".

TAG:
When the child always wants to be the center of attention ❯

add a comment of When the child scolds the parents