When the first symptoms of pregnancy appear 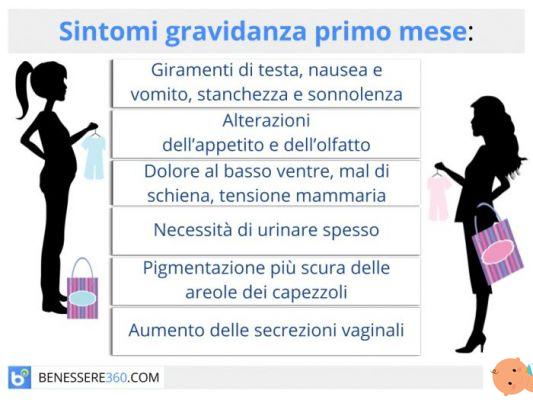 Are you trying to get pregnant but don't know if this will be the right time? After conception, the first week of pregnancy may go unnoticed. Not all bodies react the same way. There are some symptoms however, which can present themselves from the first days. From stomach ache to chronic fatigue, from loss to nausea. Let's see what are the first symptoms of pregnancy and how to interpret them.

Read also: Symptoms first week of pregnancy: how to recognize them

Listen to the podcast about early pregnancy symptoms

The first signs of pregnancy Most common and frequent, after conception, I'm:

It is certainly too early to take a pregnancy test, also because you are not yet "late" with your period. You have to wait a few more days.

It is one of the first things that changes, not only because it increases, but because it changes with darker nipples and areola. For many women it becomes difficult to sleep on their stomach due to a deep tension that is sometimes very annoying.

One of the early pregnancy symptoms and the feeling tired which can also occur in the first week after conception. Some daily activities you did leisurely like grocery shopping or brisk walking can seem much more strenuous. You can have it greater drowsiness and want to go to sleep. This can be caused by the changes taking place in the body and by the increase in hormone levels. Obviously, fatigue can also be caused by many other factors such as stress, depression, flu etc.

The absence of menstruation or amenorrhea is one of the signs that can indicate the presence of a pregnancy. However, starting a pregnancy does not exclude the presence of blood loss. In some cases, there may be a slight loss of blood in correspondence with the implantation of the embryo, with quantitative and qualitative characteristics different from case to case. These are the so-called implantation losses, which occur 6 to 12 days after the occurrence conception and are caused by the fact that theembryo it is sticking to the wall of the uterus.

A very common symptom in the first days of conception is the increase in normal vaginal secretions: it is due to the action of estrogen hormones, which make more blood flow to the genitals and act on the glands present in the mucosa, which thus increase their secretions (the "clear losses")

Nausea is one of the most common and annoying early symptoms of a pregnancy. Not all suffer from it. Nausea usually appears between the fifth and eighth week of pregnancy and should subside by the fourth month. In association with nausea, they often appear also an altered perception of taste and an increased sensitivity to odors. This also involves a sudden change of tastes. A food (for example coffee) that we have always loved, all of a sudden we don't like it anymore. It appears that the hormone responsible is chorionic gonadotropin (HCG), the hormone produced by the embryo from the very early stages of conception.

During pregnancy, especially in the first and third semester, mood swings are extremely frequent. From uncontrolled happiness to endless tears in front of an advertisement!

Belly and back pain

In the first month you can also suffer from pain in the lower abdomen and backache in the lower part of the spine, which in some cases can last throughout pregnancy. These can also be classic symptoms of your period. Often, in fact, the symptoms of pregnancy and those of PMS are similar.

Tiredness, bloating and abdominal pain, water retention, slight weight gain, breast tightness and joint pain, acne, diarrhea or constipation, whitish fluid discharge. And again irritability, melancholy and sadness, mood swings and difficulty in maintaining concentration: these are the main symptoms of the premenstrual syndrome usually occurring a week / 10 days before the arrival of the menstrual period.

TAG:
When to give antibiotics to children ❯

add a comment of When the first symptoms of pregnancy appear