When will the baby start crawling? 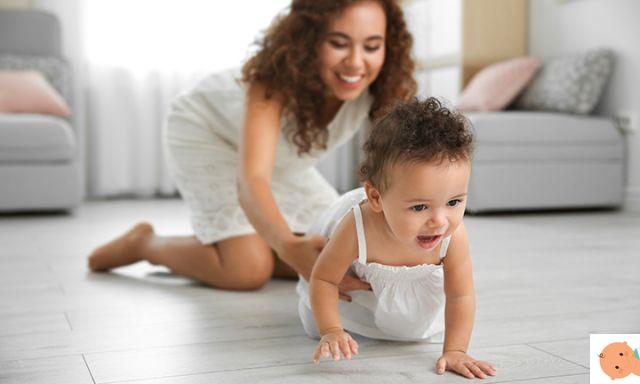 To crawl it is not a must: there are children who start walking without ever having moved on all fours and others who, on the other hand, advance sitting or crawling with their stomachs on the ground.

When does the baby start crawling?

The time in which the baby begins to crawl is generally between 6/8 and 12 months of life. The aim is always the same: from the position on his stomach, he tries to reach a distant object and not within reach of his hands.

When does the baby stop crawling?

Usually, when the baby begins to walk he stops crawling, but this is not true for everyone: there are babies who, even when they acquire a good command of the steps, continue to crawl occasionally, perhaps to move very quickly feeling safer.

#It is not true that those who do not learn to crawl will certainly walk later than the average of their peers. There are children who, while never crawling, begin to walk before the year of life.

There are different ways, including creative and individual ones. Let's see the main ones:

How to promote crawling?

Is there any way to encourage crawling in the baby?

For example, you can place him on the ground on a carpet on all fours, and then sit on the ground in front of him at a small distance. At this point you have to spread your arms and call him over and over by name, saying "come!" with an affectionate tone, without imperious accents. Finally we must praise him when he manages to get close and not get too stressed (or stressed too much) if he does not crawl.

What to do if she doesn't crawl?

You should never insist if you don't like these initiatives or, worse, you start to cry. Any forcing is counterproductive.

The stages to start walking

What are the steps to start walking?

(Advice from the Paesena Society of Pediatric Primary Care)

TAG:
When does the baby roll over onto his side or back? ❯

add a comment of When will the baby start crawling?