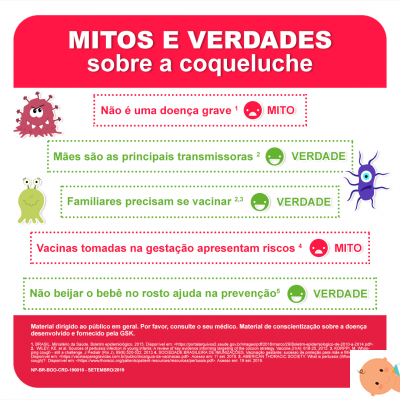 Whooping cough is a very serious disease, especially if a child contracts it during the first year of life. In this age group, in fact, the disease does not present only with the classic cough attacks, but often with some apnea crisis in which the baby stops breathing. Whooping cough can cause numerous complications such as pneumonia, encephalopathy, severe respiratory failure and even death. To protect newborns, it is important for mothers to be vaccinated against whooping cough during the last trimester of pregnancy. Thanks to vaccination, the expectant mother produces antibodies which pass to the fetus through the placenta and which will protect it in the first months of life until it is vaccinated.

Whooping cough, because it is dangerous in young children

"Whooping cough is an infectious disease of bacterial origin very contagious, caused by the Bordetella pertussis bacterium. It is counted among childhood diseases because it mainly affects children under the age of 5, but in reality it is often adults (especially parents) and adolescents who transmit the disease to children ", he says. Paolo Bonanni, professor of hygiene at the University of the city and member of the working group on vaccines of the Society of the Paesena of Hygiene (SItI).

The peculiarity of this disease is that the immunity conferred by a first infection is not definitive and therefore declines with time. "We do not have permanent immunity from pertussis and in fact after 7/10 years from the disease or after 5/7 years from vaccination we return to being susceptible to infection - explains Bonanni - it is a disease that we can have several times in the course of life" . And it is precisely for this reason that the National Vaccine Plan provides not only for vaccination during childhood and adolescence, but also for recalls in adulthood (every ten years).

Whooping cough - also nicknamed "donkey cough" - is not a walk in the park: the first symptoms are often hoarseness, cold, night cough, to which one is then added convulsive and stubborn cough. It is a very contagious disease.

As reported by the Istituto Superiore di Sanità, "adequate antibiotic treatment allows healing in a fortnight", but the real problem is when children contract the disease, especially very young ones (less than a year old) because whooping cough in the first months of life can be downright fatal. In young children the complications more serious include:

If contracted in the first months of life, as we have seen, whooping cough can even lead to death (1-2 cases out of 1000). That is why it is necessary that mother protect her little one vaccinating against pertussis herself during gestation.

Why get vaccinated against whooping cough in pregnancy

The only serious, concrete and proven way to protect the baby in the first months is to vaccinate the pregnant mother. When a woman receives the pertussis vaccine, she produces antibodies against Bordetella pertussis they pass to the fetus via the placenta and that protect him for several weeks after birth. "Often there is a sort of historical hesitation for which pregnant women should not" cure themselves "or at least only for the indispensable things - says Prof. Bonanni - here, the pertussis vaccine, together with the flu vaccine, are two vaccinations that can saving the lives of many children and which have no side effects for future mothers ".

Get vaccinated against whooping cough inlast quarter of pregnancy greatly reduces the risk of infants under two months to get sick, and to do it seriously. The latest confirmation in this sense comes from a study published a few years ago in the journal Clinical Infectious Disease by a group of researchers from the most important American center dedicated to disease control and prevention. The researchers analyzed the personal and family history of 240 children who had had whooping cough before they were two months old and of more than 500 children with similar characteristics, but who did not get sick. Discovering that, in fact, the disease was much less common among children whose mothers had vaccinated against pertussis - or, rather, the trivalent vaccine against diphtheria, tetanus and pertussis - during the last trimester of pregnancy.

The data of the study speak for themselves: vaccinating in the third trimester of pregnancy avoids 78% of cases pertussis in infants under two months of age, e 90% of the most severe cases, those that require hospitalization and are potentially fatal.

This is further confirmation of a series of existing data on the effectiveness of this protection measure. A study published in April 2022 in the scientific journal Pediatrics, for example, showed that among the nearly 150 babies born in California between 2022 and 2022, those whose mothers received the diphtheria, tetanus and pertussis vaccine during pregnancy had the 91% less likely to get sick pertussis in the first two months of life, and 69% less likely in the first year of life.

"Not getting vaccinated against whooping cough during pregnancy, for fear of adverse effects, would mean putting the health and even the life of your child in danger. A risk that is far too great compared to the minimal side effects that the vaccine can have" says Bonanni.

Read also: Pertussis vaccine, the answers to the most frequent doubts

Possible side effects of the pertussis vaccine

The pertussis vaccine (given together with diphtheria and tetanus in the dTpa trivalent vaccine) is indeed very safe, so much so that it is currently recommended by various international and national health authorities including our Ministry of Health and also the World Health Organization. Being a medicine it could cause side effects that are usually mild, such as:

In rare situations it can happen that some allergic reactions, but it is a real rarity. The vaccine against pertussis is in fact contraindicated only for women who have experienced in the past an allergic reaction to one of the substances contained in the vaccine preparation (including excipients) or to a previous dose of the pertussis vaccination.

As for the safety of the vaccine on the fetus, no studies conducted to date have shown adverse effects on the fetus due to vaccination against pertussis obtained during pregnancy.

How the pertussis vaccine is made

The pertussis vaccine, given as a trivalent dTpa vaccine, is a acellular vaccine: it means that it does not contain the whole organism (the Bordetella pertussis bacterium), although inactivated, but only some of its protein components. In some countries, including the Del Paese, the acellular vaccine has replaced the cellular vaccine (whole, inactivated) over the years because the latter, although safe, tends to give some more side effects.

When to vaccinate during pregnancy

The best time to vaccinate during pregnancy is between the 27 and the 36 weeks. "Ideally, the 28th week would be the best because it goes towards the end of pregnancy and being the placenta more permeable, more antibodies pass to the fetus, but the important thing is to get the vaccine" adds Bonanni.

The vaccination in the third trimester must be done even if the decennial booster of the dTpa vaccine (diphtheria, tetanus, pertussis) has been recently performed and even if it has already been done during a previous pregnancy, as also indicated by the US CDC (Center for and Disease Prevention).

"The vaccination it must be carried out at each pregnancy, even if the pregnancies are very close because otherwise an antibody titre is not reached to be able to supply the fetus with an adequate quantity of antibodies to protect it "concludes Prof. Bonanni.

Read also: My little one struggled with whooping cough and pneumonia. But luckily he made it!

Other useful information on the pertussis vaccine

Read also: Vaccines for childbearing age and pregnancy: the new recommendations of the Ministry of Health

TAG:
Vaccine against whooping cough: the answers to the most frequent doubts ❯

add a comment of Whooping cough vaccine in pregnancy? That's why yes