Why are children sometimes ruthless? 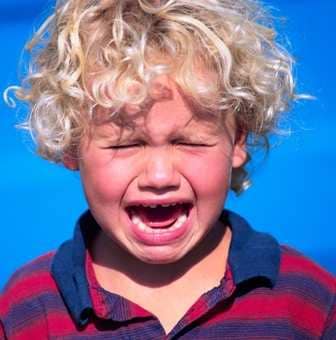 Little Enrico, three years old, tries to detach the trailer from Sara's car. And she reacts: she turns, gives him a loud slap and then peremptorily tells him 'You are no longer my friend'. Enrico's mother is definitely annoyed, Sara's mother embarrassed. They both think: why do children sometimes manage to be so ruthless?

But how is it possible for children to kick and push each other for a trifle? Why do they tell unlikely lies? Why do they hurt themselves for free? The hypotheses that child psychologists have focused on are.


Hypothesis 1: It takes time for children to learn what is good and what is bad.

Hypothesis 2: Parents have to teach their children good and evil.

The development of morality

In particular, scholars have questioned the development of morality. Psychologists ask: How is it possible for most children to behave well (some to the point of acting against their own interests), while others are unscrupulous and harm themselves and others?


To find an answer to this question, they looked at the children from different points of view: how they judge, how they tell lies and how they deceive. They also observed how they react to footage containing violent scenes.

Already at one year of life ... in children there is a feeling similar to compassion: infants are infected by the crying of other children and are happy if someone is laughing near them.

At two years old ... children are able to console another child. They caress an injured child or hand a handkerchief to their mother when she cries. They feel obligated to share toys or candy with others. The ability to feel compassion and to act in an unselfish way therefore seems to be present in all children of two or three years.

At about four years old ... they have an amazing double morality. This was concluded by scientists from the famous Max-Planck-Institut for psychological research in Munich. When asked how a child who has stolen sweets and candies feels, 80 percent of the boys and girls replied, "Great, the sweets are really good." A little while earlier those same children had said with pride and conviction that you can't steal: "It's a bad and bad thing."

In elementary school ... children are already able to distinguish moral principles from social rules. Example: They know they don't hit other children. And they know that the teacher is not called by name.


What can be deduced from these observations? That the second hypothesis, namely that children do not know morality, does not hold up. "Children soon acquire a differentiated moral conscience," explains Gertrud Nunner-Winkler of the Max-Planck-Institut for psychological research. But the scientist adds: "There is a big difference between moral awareness and moral will".

In other words: young children know what the correct way to behave is, it is time to put it into practice but they fail. They know the rules, but they don't understand (yet) why they have to abide by them. It seems that young children and preschoolers still have to accumulate certain cognitive skills, social experiences and knowledge of the world. This is why in a whole series of situations we should grant him mitigating circumstances.

When a three-year-old sits in a moving carton that has headlights painted on it and says seriously and proudly, "I can drive!", Is that really a lie? Distinguishing between fantasy and reality, in this so-called magical phase that lasts until school, is difficult for many children.

This is why young children often behave in an "immoral" way, it is the particular situation in which they find themselves that leads them to behave this way. Or they beat up their friends when they feel threatened and are not used to dealing with conflicts with words.

Furthermore, curiosity often leads them to find themselves in dubious situations. They want to experiment, to test themselves and others, they want to provoke reactions. Adults must get used to not always seeing the evil behind their every action.

Let's take for example a two and a half year old boy who likes to pull other children's hair: he doesn't do it out of malice, maybe he just finds the cries of those around him fascinating. The day Mom will explain to him how bad it is to pull her hair, she will stop doing this spite. He sure doesn't want to hurt anyone.

Even Sara, of whom we spoke at the beginning, wanted to give a test with her slap, she wanted to measure her strength. Could she have kept the trailer to herself without much discussion? (since Enrico did not leave it to her after the slap, she tried to convince him verbally).

Thus also hypothesis 2 is unlikely: the parents are not (the only ones) responsible for the moral education of a child, which instead depends on the whole surrounding environment. The child watches in countless situations (with peers at the nursery or kindergarten, at grandparents, in movies on TV) how other men behave among themselves, and judge them. And of course it is particularly important whether these models are characterized by loyalty or by their cheating.

The role of mum and dad in this case is very important, but just by giving them the right example, not by admonishing them constantly. What is the use of scolding the child because he has told a lie if he does not behave correctly in everyday life, for example if he is gossiping with his neighbor and then talking about her at home as a "stupid hen"? Children learn every day what things are done and what are not done. A good example will then strengthen a child's morality.

Pills of wisdom for parents

In conclusion: it is a slow process that transforms a child who knows the rules into a person who also acts according to these rules. The more often a child sees that loyalty and fairness allow him to achieve his goals and even be happy, the more he will embrace this value system in his life.

Of course, there can always be relapses. Even if Sara will still beat a couple of children or at school she will never have her classmate copy during the dictation, it is not excluded that sooner or later she will learn, by experience, the meaning of compassion.

TAG:
Why do children who go to daycare get sick often? ❯

add a comment of Why are children sometimes ruthless?