Why do babies cry at birth? 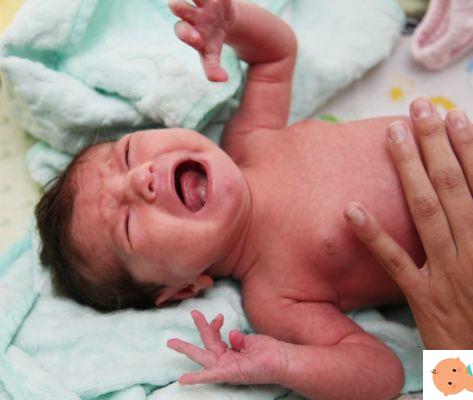 Why do babies cry at birth?

The moment in which our little one comes to light is a long moment of tension and hope, which reaches its climax when the baby explodes in its first cry. But why babies cry at birth? Answering this question is essential to better understand human nature and, above all, the needs of the newcomer.

To fully understand the importance of baby crying at birth, we anticipate that doctors and nurses are prepared to induce it if it does not happen naturally. Baby crying is life, it is strength, it is an extraordinary way to take your place in the world. But let's see the details.

Read also: 8 tricks to calm the newborn who cries often

Until not so long ago it was quite common to believe that the brain of the newborn was incapable of complex reasoning at birth. Basically it was believed that the newborn babies had an immature mind and almost completely indifferent to what happens around them.

To correct this error of assessment have thought up accurate neuroscientific studies, which have shown that, in reality, the child's brain is very, much more complicated than could have been imagined, to the point that during the birth it is the newborn himself who gives "a hand", net of his abilities.

According to neuroscience, therefore, the baby's crying is an (almost) conscious act and not mechanical: it is a real adaptation response that the little one puts in place to begin to breathe and move in a different, complicated environment, as unexplored as it is already intrinsically considered "own".

The cry of the child from the scientific point of view

But, scientifically, why do babies cry at birth? Let's try to explain it in simple words. The newborn, up to the moment of birth, receives oxygen needed inside the uterus by means of the placenta. During the nine months of gestation, his lungs mature perfectly but they are not in operation: on the other hand, the baby is covered with amniotic fluid.

When the child is pushed out, his mind (and here the reference to neuroscience comes back) realizes that there is no way to supply himself with oxygen in the way that, until then, was considered "usual". Thus, signals are left to stimulate the lungs, which will begin to contract and expand gently.

Nevertheless, small amounts of fluid could remain inside the lungs and respiratory tract and here comes crying: through the latter not only the children begin to breathe, but they push out the leftovers. It is for this reason, among other things, that the crying often begins in a subdued and gurgling way and becomes gradually more acute: freed of all the remaining fluids, our little one begins to breathe correctly.

The common reasons for the baby's crying at birth

The first cry is as symbolic as it is fundamental. Contrary to what one might have believed a few decades ago, i reasons behind the crying of the child at birth do not have anything to do with a hypothetical traumatic passage from the mother's womb to the outside world.

As we have seen, the reasons are closely related to body functioning and respiratory system. However, if the baby does not start crying within the first few minutes of giving birth, steps are taken to make him cry. In the past, the newborn was held firmly upside down and received small slaps on the bottom.

This caused him a little pain which also prompted him to move and clear the blocked airways. However, modern technologies make it possible to unblock the liberating ways by means of a suction pump. In that case the baby cries because of the lung contractions induced.

Another reason the baby may cry at birth is related to what is used to wrap it. In fact, if the newborn does not cry immediately, doctors and nurses may decide to swaddle him with a towel, whose texture is decidedly rougher than amniotic fluid: the irritating feeling it is perceived as new and triggers the reaction.

How to calm a crying baby?

Wondering how to calm a crying baby at birth is actually superfluous. As we have seen, the little one literally cries for a living and take his place in the world: there is very little to worry about.

Despite this, it is more than normal (as well as scientifically proven) that the baby's vocalizations trigger some care reactions in the new mother, who will immediately feel the need to keep and pamper the new baby.

Basically, this is enough: contact with the mother comforts the baby, her smell and her presence make him feel at ease.

What if the baby doesn't cry at birth?

We close with a question that many women ask themselves: what happens if the baby does not cry at birth? In reality, if the baby does not start crying immediately, he is not there nothing to worry about. In fact, it is necessary to look at the situation of the complex: many children do not cry immediately, but come into the world with a perfect pink color, they move perfectly and are alert.

There are little ones who start crying after a few minutes, calmly. If it does not happen, clearly, crying must necessarily be induced because it is fundamental. It is generally themedical team, who can opt for the methods we have already mentioned: suction pumps, an old-fashioned spanking, the use of a towel and even massages that can stimulate the little one.

Why do babies put everything in their mouths? ❯

add a comment of Why do babies cry at birth?