Why do babies (usually) have more tantrums with mom? 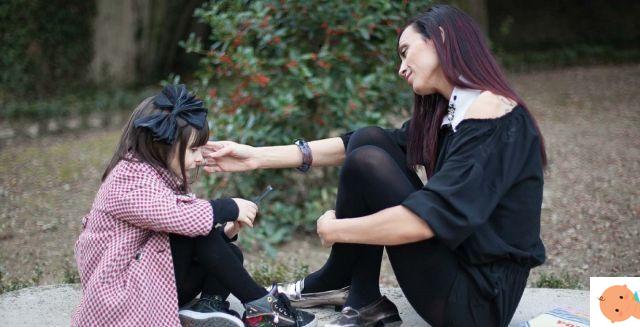 Having tantrums with mom - and even with dad - can be defined as an almost physiological phenomenon, because tantrums represent a sort of 'technical life tests' for the child. Here's how to deal with them, with the advice of Rosanna Schiralli, psychologist, psychotherapist and creator, together with Ulisse Mariani, of the online platform for parents Family School, which aims to help mothers and fathers to raise their children according to the method of Emotional Education.

The whims of children? They are normal technical life tests!

It can be said that children 'must' throw tantrums and it would be strange if they did not, because through whim they experience how far they can go, what their range of action is and above all what limits are placed on them.

Let's face it, it is the thing that makes us more angry: when they are with strangers or when they are in kindergarten they tell us that they are little angels, obedient and very polite; when they are with us, we would wonder where they learned education. “This is also normal and is mainly due to the fact that children have the greatest confidence with their mothers” stresses Rosanna Schiralli. "On the other hand, even we adults, when we are angry or nervous about anything, we tend to let off steam with the people we love most, simply because they are the ones to whom we feel free to be able to show our parts that we tend to hide from others"

But it's not just a question of confidence. Often the whim is also a way to keep the parent close to him, because as long as he has to answer him, placate the complaints or even get angry, in any case he is close to him and does not go away.

A deso of attachment that is valid especially if the child has been away from his mother all day and, when we go to pick him up at the nursery, at the playroom or at his grandparents' house, he plants a grain for every nonsense almost as if he wants to make us pay for leaving him without. us so long

Read also: How to explain to the child that mom goes to work far away

Sometimes it is a request for more attention

If the whim has a certain frequency and intensity, it could also signal a dysfunction in the relationship with the mother: the child, for example, perceives that the mother is mentally distant from him, in the sense that he sees her nervous or continually distracted by something else, he dedicates little attention or never play with him. Here then the whim becomes an expedient to claim more attention for oneself.

Read also: Whims on vacation and at the sea: 4 strategies to manage them

Don't ignore them but mirror them
Unless we disrespect or engage in highly rude behavior, let's give him the opportunity to let off steam a little and reflect his emotion, letting him know that we don't ignore him but we understand that it can happen that he is more nervous, that he has had a bad day. . But then we let the whim die off on its own.

Don't indulge the whim
To mirror does not mean to indulge the whim, otherwise the child could come to the conclusion that in this way he can make his mother do what he wants. And she uses it as a tool of tacit blackmail ('if you don't want me to have a tantrum, you have to give me this')

Read also: No to tablets and smartphones to calm the whims

Put a brake
After quietly telling him that we can see that he is so angry, that we understand that he would like to achieve a certain thing, we just as quietly add that we cannot satisfy him. "Rules and boundaries must be set in a firm and calm way: if we get angry we have failed in our goal!" adds the psychologist. “Thanks to neuroscience we have discovered that whims originate in the posterior area of ​​the brain, which is that of instincts and drives, which would like the immediate satisfaction of every desire. Through the educational intervention of the adult, a chain of neurons is formed that connects the instinctual part with the frontal area of ​​the brain, which is that of control, which allows the child to put a stop to his impulses, learn to manage them and grow serene. And we adults have to put these brakes on it ”.

Read also: Why it is important to give rules to children, according to the method of emotional education


If you do the whims at the table
It is one of the typical situations of whim: at the kindergarten canteen he eats everything, at home he twists his face in front of every dish, protesting because he does not even want to taste what we have prepared. Why does he do it? “Because she senses that food is one of the issues that are most dear to parents and that the mother, in order to see him eat, would be willing to do anything” Schiralli replies. “And instead, no alternative à la carte restaurant menus, but above all no tug-of-war or angry faces. Don't you want to eat? With the greatest possible indifference we tell him that there is no problem, that it can happen to everyone not to be hungry, the important thing is that he remains seated with us at the table. Then let's change the subject. However, if after half an hour he claims to be hungry, no snack! "

If he has a tantrum on the playground
When the time has come to go away, he doesn't want to know, he runs away somewhere else, pretends not to hear us or insists on staying longer. "After explaining to him, always with the usual calm tactic of mirroring, that we regret having to go away, that we know he would like to stay there again, we announce that we will give him a few more minutes and then, after the time has elapsed, we tell him firmly and decisively that we go away ”suggests the psychologist. “Without shouts and screams. And maybe we even begin to walk. After a few seconds he will be by our side!

Read also: Lively kids: 8 strategies to manage them without screaming and slapping If they are too many and exaggerated, ask an expert
If the child's tantrums are too frequent, if the child assumes exaggeratedly exasperating, aggressive or provocative attitudes, it could signal an unease in his relationship with his parents. In this case it is better to discuss with an expert to go to the source of the problem and identify the most suitable approach

TAG:
Why do babies cry? ❯

add a comment of Why do babies (usually) have more tantrums with mom?