Why do children tell "lies"? 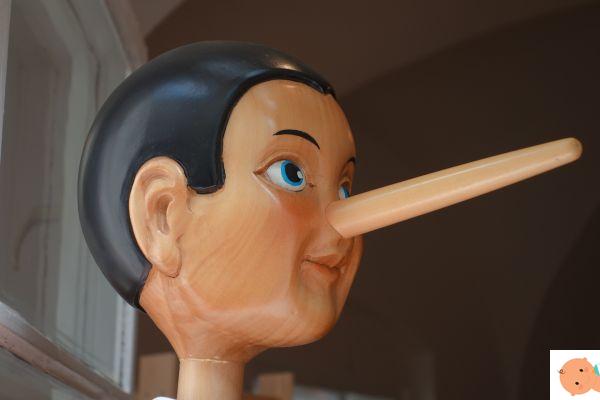 In the top ten of the most popular common beliefs about the presumed 'nature' of the small child (often depicted as a monster who tyrannizes the adult in every way) the idea that he is 'crafty' is placed in a good position. In short, a liar, already in preschool.

'Eheh, they are smart from an early age, my lady, you have to be careful!'

There is no need to believe the stories of a child, for sure, he is not telling the truth! '

Every parent will have, at least once, been warned by a fleet of 'experts' - relatives, neighbors, grandmothers, uncles, ladies with children - about the (pernicious!) Tendency of little ones to lie.

But then, do children really (intentionally) tell a sea of ​​lies?

In reality, it is not right to define the stories of children in this age group as 'lies' because they are not animated by the desire to deceive, unlike the adult who, on the other hand, tells a lie in a conscious way.


This is explained by Scalari, a psychologist, psychotherapist, psychosocioanalyst and prolific author. The latest work, with Francesco Berto, is Word of a child. The world seen through her eyes, La Meridiana, which also explores this theme.

“In fact, it is more correct to call what the i say children 'little stories' and not lies. The preschooler tries to pass from dependence towards the parent, typical of the first years of life, to a gradual autonomy also through subterfuge. Telling stories demonstrates his will distinct from that of the adult, ”says the psychologist. (Read also: Why are babies sometimes explained?)

The world of children is dominated by fantasy and timeless

The same episode, told by a child, is often different from the 'version' that an adult would give, but this does not imply the desire to voluntarily deceive the interlocutor. It should also be borne in mind that the boundaries between reality and fantasy are still very blurred.


Not surprisingly, when you ask, for example, a three to four year old boy what he did the previous day, the answer can range from a seraphic 'nothing' to the meticulous description of a funny afternoon two months ago.

The temporal connection does not belong to the world of the little ones who live in a sort of 'here-and-now', where space, time and relationships are 'distilled' between emotional and bodily sensations.

According to the Swiss psychologist and pedagogist J. Piaget, in essence, before the age of six or seven, the mind of children is dominated by magical thinking: reality, that is, mixes with fantasy without any logical connection.

Does the child tell 'lies? Then it is intelligent and autonomous

The stories of the little ones and their interpretation of daily episodes under the sign of the imagination, constitute a fundamental stage of growth and cognitive development.

"Children's stories represent the prelude to two aspects that every parent usually cares a lot about: intelligence and autonomy - says the psychologist Scalari - Telling stories, in fact, is an index of intelligence and, at the same time, is a way to affirm yourself on the path to greater autonomy.

The parent, therefore, should accept the preschooler's little stories as a kind of beacon of his abilities. His stories are not a manipulation of reality like the one an adult can do - says the psychotherapist. (Also Read: 7 Tips for Raising Smart Babies)

Of course, at times, a parent can be perplexed by the 'exits' (full of candor) of a two-three-year-old child who denies, for example, having eaten chocolate, with his face all dirty.

Even at this juncture, history has value for growth because “it creates the separate space inhabited by the child and the parent - says Scalari -. In fact, stories are also a way to escape parental addiction ".

But in such a situation, how should the adult behave?

“In such a case - explains Scalari - the mother should listen carefully to the child. It doesn't make sense to ask him, 'Why did you say you didn't eat the chocolate?'

If it is not a good thing for her that the child does not admit that he has done it, he should address the child in the third person, telling another story in turn.

'Ah, really, it wasn't Carlo who ate the chocolate, ok, I understand, it was Carletto who is an older child and a bit of a crafty and very greedy one!'.

With this type of approach, the parent can educate the child, passing him a message but without killing his creativity and desire for independence ”, says the psychologist. Read also: How to enrich children's vocabulary

The first 'real' lies appear around the age of six

With the entrance to the primary school, around the age of six, the situation changes. Often, when mom asks her son, 'What did you do at school today?', A typical response is 'Nothing!'.

'But did the teacher tell you something? 'Nothing!'.

This is a 'back and forth', known to almost every parent, which marks a new phase and a different perception of the child of the real world, much more similar to that of the adult.

"In this age group, when a child tells something that does not correspond to what actually happened, intentionality appears", says the psychologist. But even in this new phase it is important not to brand the child as an unrepentant Pinocchio without taking into consideration what moves him.

In this period, as the psychotherapist explains, the lie comes mainly from two directions: the search for approval and the desire for independence.

The child does not want to disappoint the parent

The first aspect, from which the lie arises, is dictated by the child's desire to be exactly what his parents want. In other words, he is keen to give a more beautiful image of himself: the lie, therefore, serves him not to disappoint mum and dad.

"For him, approval is so important that he hides some aspects of his disposition and wears a mask supported by the lie," says the psychologist. He is too afraid of disappointing his parent, the thought of reading disapproval, for example, in his mother's gaze is unbearable ".

"I tell lies to make a good impression"

“I didn't want to eat cheese in the canteen. So I put it in the container and took it home. I told the teacher that I had eaten it all because it was so good. And she told me good because she thought I had eaten everything "

(Thoughts of children of the first three years of primary school on the lies collected by one of the authors, F. Berto, taken from the book Word of a child).

A lie can be a way out of parental anxieties

The other great underlying motivation that drives an older child to tell lies is to escape the invasive control of the adult. "The child feels besieged by his parents, by their demands, expectations, anxieties and so he builds a screen to experience a little autonomy", says Scalari.

If, for example, the child decides to go to school by bike but knows that his mother would not give him permission, he will avoid talking about it. When asked: 'But did you walk to school today?', He will simply say 'yes'.

In this case, the lie arises because of the 'prohibition' (perhaps imposed for an excess of anxiety) that the child is too tight. "With the lie, he creates his freedom but he also assumes the responsibility of being careful on the bike, because if something happens and they 'catch him', then he doesn't go there anymore", says the psychologist.

Frequently, the adult tries to have total control over every aspect of the child's life and this can push him to search for a 'way out', the lie, to carve out space for maneuver (and autonomy).

For example, the mother asks the child if he has eaten the snack, and he confirms. In fact, she gave it to his classmate that he is in love with but she doesn't want to tell.

“My mom is obsessed with making me wash my hands, face, knees and even my teeth a thousand times a day. I get bored and then I always tell her that I washed myself even if it is not true because I also like to be a little dirty like my teammates "

"Sometimes the lie is needed to keep our things secret"

(Thoughts of children of the first three years of primary school on the lies collected by one of the authors, F. Berto, taken from the book Word of a child).

A good rule for the parent? Listen and mediate

When the school-age child does not tell the truth as in the case of the bike, according to the expert, the parent who discovers it should smile. listen to his son and try to understand him.

Behind every lie told by a school-age boy, with a little attention and willingness to listen, the adult can grasp the reasons, hidden desires and aspirations of the child. And almost always, it takes very little to find a solution together.

However, it is not so easy for everyone to try to understand the child's motivations while remaining calm. Why are there those who charge such an episode with negative value, which is a stage of growth?

According to the psychotherapist, mothers are often afraid of a lie, they feel they are being pushed out of the door by their children ('but how? Who knows him better than me?') And this leads to a sense of exclusion anxiety.

If for the parent the child's lie is not acceptable, for the author, the best way is through mediation.

“It is important to mediate the child's freedom, to give him more autonomy, perhaps saying: 'I don't like that you ride a bike alone, it's much better in company!'. Of course, in any case, the scolding is not the right way, and the typical phrase, 'no lies are told!' stop, it leads nowhere, it makes no sense.

Among other things, it is bad that a child does not tell his 'little stories', in short, it is not a value not to tell lies, says Scalari.

The lie then prepares that space that in adolescence becomes the secret, the ability to be silent and reason with one's own head. Sometimes, not everything can be said, it is also important for future relationships to know how to remain silent ”, concludes the psychologist.

TAG:
Why do babies (usually) have more tantrums with mom? ❯

add a comment of Why do children tell "lies"?