Why do children who go to daycare get sick often? 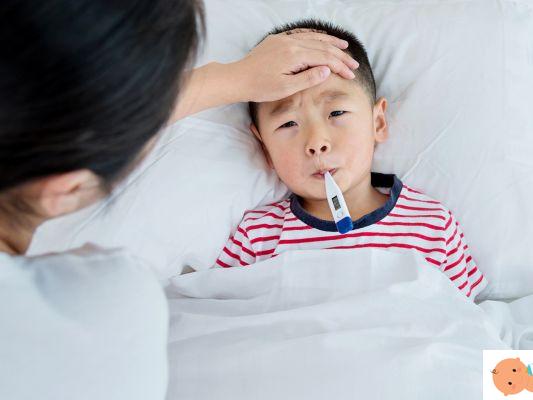 "Since going to kindergarten he has been getting sick all the time." How many parents recognize themselves in this statement? It is quite common, in fact, that children who attend the nursery have to deal with numerous colds, which perhaps alternate with ear infections or viral gastroenteritis.

"In the first year of nursery - or kindergarten, if they have not gone to the nursery - children are particularly prone to viral infections, mostly affecting the respiratory and gastrointestinal systems "he underlinesto Giuseppe Di Mauro, president of the Del Paesena Society of preventive and social pediatrics. So cough, sore throat, cold, ear infections, diarrhea, vomiting, fever.

Fortunately, in most cases it is nothing serious. "It is important to reassure the parents" underlines the pediatrician Antonella Brunelli, director of the Rubicone-Cesena health district and member of the Paediatricians Cultural Association. "In fact, we are talking about usually trivial infections, which do not strongly compromise the general health conditions, so much so that it is not unusual for the child to play and trip quietly even if he has a fever of 39,5 °" she specifies.

Infections are therefore the norm in the nursery or maternal. After all, closed rooms, often excessively heated and where many children play, they represent the ideal environment for the propagation of viruses responsible for infections in the first years of life. Their transmission is further facilitated by the fact that children continually exchange toys, even after having kept them in their mouths. And so the germs easily pass from one child to another.

On the other hand, "it must also be considered - underlines Brunelli - that the immune system of children, in the very first years of life, is not completely mature". It still has to learn well how to defend against infections and the result is that children get sick more often. With a positive implication: "It is precisely through contact with viruses and bacteria that the immunological learning processes are activated and the immune defenses are strengthened, with the result that, with the passage of time, children will become less and less susceptible to infections ".

In other words, once it has had contact with a microorganism, the immune system develops an immune memory, which allows it to equip itself to react more readily, in the future, in case of new contact with the pathogen.

"Precisely because a child is a child and, up to a certain age, his immune defenses are not fully developed, he gets sick more, but we don't have to make a drama out of it" comments Di Mauro. Even if actually working parents find themselves having to reorganize the family and work routine every time the little one gets sick.

"While it may be complicated, it is timely keep it at home a few days, until he fully recovers: not only so as not to infect other children, but also so as not to expose him, when he is still a little weakened and therefore more vulnerable, to new germs ". Better to wait, then, than the cold or the fever have completely passed. "There is a need, in essence, for vigilant waiting. Without abusing drugs ".

Also because viral diseases such as colds, ear infections and gastroenteritis generally have a rather short course and there are no drugs that reduce their duration. "At most you can resort to pain relievers or antipyretics to make children feel better while waiting for everything to pass "explains Brunelli. Or, in case of cough and cold, remedies such as nasal washes or the classic cup of warm milk with honey, which certainly do not heal but in some cases can provide temporary relief.

On the other hand, it is very important to avoid an inaccurate use of antibiotics. "In the case of viral infections they are useless, because they are specific against bacteria - explains Brunelli - and moreover their improper use risks making them ineffective when it is necessary to take them to fight a bacterial infection".

Read also: Children with a fever? Let them laze

What about recurring and relapsing infections?

However, in case of continuous relapses, it is better to pay some extra attention.

"25% of children under the age of three - that is one in four - are prone to recurrent viral infections. This means that they have at least 8 in a year, and some tend to have recurrent infections always localized in the same location: for example always in the ear (otitis), or in the bronchi (bronchitis), or in the throat (pharyngitis) "specifies Susanna Esposito, pediatric infectious disease specialist, director of the Pediatric Clinic of the University of Perugia and president of the World Association of Infectious Diseases and Immunological Disorders.

"In these cases, it is better to investigate to assess whether there are underlying conditions on which it is appropriate to intervene: too frequent asthmatic bronchitis, for example, may be due to an allergy, recurrent acute otitis media may be an indication of abnormal characteristics of the conformation of the facial mass or immunological alterations, and who always has pharyngitis can have an enlargement of the adenoids or tonsils ".

How to prevent continuous ailments?

A few simple strategies can help out:

Probiotics and infection prevention: what do we know?

Once particular health conditions have been ruled out, it may also be useful to try to get your child to take some Probiotics, precious allies for the well-being of the whole organism.

In fact, some strains of probiotics, such as Streptococcus salivarius K12, are able to keep the oral microbiota in balance, which in turn has the task of defending the airways from the attack of virus and battery pathogen. According to a study published in the scientific journal Minerva Medica, taking Streptococcus salivarius would significantly reduce the strep infections, but also other infections such as pharyngitis, laryngitis, rhinitis and otitis media, without bringing with them any adverse effects.

Vaccinations, for the health of children

"In general, it is very important to carry out routine vaccinations to safeguard the health of the little ones," explains Esposito. On the other hand, not all viruses (and bacteria) are trivial.

"Some - recalls Brunelli - are particularly aggressive and cause diseases that can have very serious complications, infectious diseases against which the immune system does not care. I am thinking for example of measles, which can cause deafness, neurological delays and even death: so the advice is to vaccinate children ".

"But flu vaccination should also be recommended, which can be performed in pediatric age after 6 months, particularly if children go to the nursery or nursery and are suffering from chronic diseases that increase the risk of complications from flu" concludes Esposito. "Indeed, the contagion from flu virus it weakens the organism and makes it more susceptible to other infections, especially of the respiratory system ".

School: 10 tips to avoid back pain for children

Why do children in kindergarten often get sick?

Closed rooms, excessively heated and where there are many children, represent the ideal environment for the propagation of viruses. Furthermore, the immune system of babies, in the first years of life, is not yet mature, so it is easier for them to get sick.

What to do if children who attend daycare get sick?

It is advisable to keep the child at home for a few days, until he fully recovers: not only so as not to infect other children, but also to avoid exposing him to new germs.

What to do to prevent children in kindergarten from getting sick?

TAG:
Why babies have to go to bed early ❯

add a comment of Why do children who go to daycare get sick often?