Why does the baby vomit and when to worry 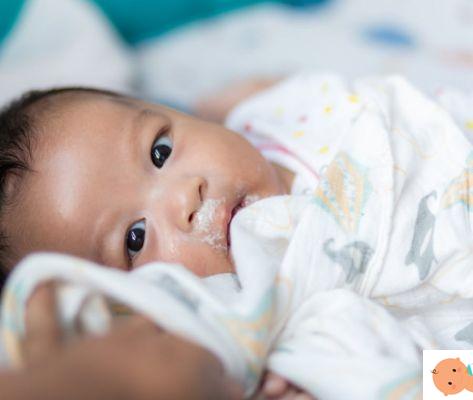 Newborn vomiting: causes and how to treat it

Newborns are fragile creatures and every one of their disturbances, even small ones, worries new parents. Today we talk about the vomiting newborn, a frequent nuisance in children which at times, however, must be kept under control.

Why the baby vomits

It happens very often that newborns vomit, even if many times theirs vomiting it is not comparable to that of older children. Many, however, suffer from reflux, which is the ascent of food to the esophagus from the stomach. Why does it happen? Why the cardias, a valve located between the esophagus and stomach, is still immature and its function is not fully developed.

Some babies regurgitate after feeding, or maybe a little later, in very small quantities, so much that they are not even conspicuous. Other times, however, the regurgitation resembles vomiting because the quantity and jet are powerful.

When to worry about reflux

As we said, the reflux it is not real vomiting: over time, in the absence of problems, it disappears by itself thanks to the maturation of the cardia. In other cases, however, the regurgitation can be abundant, "spray" and frighten the parents. In fact, it could be gastroesophageal reflux disease, or pyloric stenosis (the narrowing of the stomach opening), or a viral infection such as rotavirus.

The most common cause of gastroenteritis in infants is viral, such as the rotavirus. In very rare cases, younger children are contaminated with bacteria and parasites, as they feed only on milk. Transmission of the virus occurs for via orofecal: for this reason it is essential to constantly wash your hands, especially if there are other children in the house and to avoid that they touch the baby without first having sanitized the hands.

Unfortunately, even the oral transmission it is possible: the exchange of saliva or other particles present for example in the nose can infect the child. So if you or any of you are sick, avoid being in close contact with the baby and, if that's not possible, wear a mask.

Read also: Rotavirus: the little girl was vomiting constantly. Only in the hospital did she recover

What to do when the newborn vomits

If your baby vomits some milk after feeding, don't worry. Talk to your doctor at your next checkup but it's a fairly common occurrence. Instead, you should ask for a quicker consultation if in addition to the vomiting you see weight loss, sleepiness, difficulty feeding, if it indicates dehydration (does not wet diaper), if vomiting is accompanied by fever and diarrhea.

In most cases, even in very young children the vomiting it is transient and does not require treatment, but the symptoms and behavior of the child must be observed. It is especially important to prevent the baby from becoming dehydrated by checking the number of wet diapers and attaching him to the breast whenever possible. If, on the other hand, it is fed with formula milk, you can wet his lips frequently with a little water.

In more serious cases of gastroenteritis the recovery precisely because of dehydration, which will be proposed intravenously. This is rare: for most children, vomiting resolves within 24 to 72 hours.

It is normal for a newborn to vomit after feeding, even in large quantities. Over time the problem clears up, but if it doesn't, consult a specialist. If, on the other hand, the episode of vomiting is unusual and accompanied by other ailments, talk to your pediatrician immediately.

TAG:
Because theater is good for children ❯