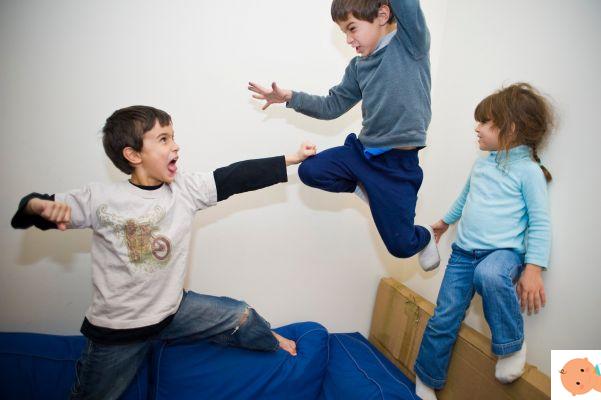 During the day, in kindergarten and primary school, in the park or at home, during a snack, fights, shoves and more aggressive episodes (including some 'slapping') often explode among children. The tones become higher and seem almost threatening to the eyes of an adult but, as after a summer storm, the atmosphere soon returns to serene.

This happens because fights between children, including beatings, are a normal stage of growth. The aggressive component (which often worries the family) is part of the social behavior and relationship they have between them.

When the parent wonders, with some anguish, why (and if it is 'normal') that the child hits others, in reality, he is asking himself the wrong question. "It is essential to move away from the idea of ​​'hitting' considering that the child always interacts spontaneously".


To support it is Daniele Novara, pedagogist, founder of the Psycho-pedagogical Center for Education and Conflict Management, university lecturer and author of over 35 essays - including the bestselling Litigare fa bene. Teach your children to manage conflicts, Rizzoli.

Up to six or seven years, then there is no intention to do harm ("resentment and violence do not exist," says Novara) and in fact if the clash is managed directly between children, in general, it lasts very little. After that age, a certain awareness is reached, says Novara, but even in the 6-10 age group, dangerous behaviors are an exception.

How should the parent behave in the face of these child behaviors? According to Novara, the main way is not to blame him "an attitude that really leads nowhere", avoiding to interfere, to favor his ability to resolve conflicts 'alone'.

More interventionist vision instead of , medical psychologist psychotherapist, author of numerous essays and books for parents (including, on the subject, Il bullo Citrullo ... and other stories of a bit like this and a bit like that, Erickson). While it is unfair to blame the child, it is important to make him understand that "it is not okay to treat others badly". In any case, according to the psychologist, the child must feel that the adult is his ally and is ready to help him if he asks because he cannot manage the situation. But let's take a closer look at what the two experts suggest.

Frequently, the parent applies a yardstick based on an 'adult-centered' vision (which places himself at the center) towards the child's behaviors. But this is not correct.


"The term beating already introduces a judgment towards the child, a paleocriminal consideration, which does not take into account the fact that it is a growing subject, animated by the desire to learn," says the pedagogist. "This also leads him to show a high rate of nervousness because he still does not control words and movements well".

In short, we must take into account that the child is learning to relate to others and at first it is difficult, but this does not mean that he has violent intentions. For example, he gives his partner a push because he wants to get on the slide first and is only moved by the desire to play.

In fact, children immediately manifest what they feel, they experience emotions in a pure state, spontaneously and without filters. “We adults don't tell the mother-in-law or the neighbor that we can't stand them, the children instead express everything directly,” observes Novara.

The quarrels (sometimes, the beating) between children are physiological episodes, inherent to the very nature of the game

Studies show that the preschool child, if left alone with his companions, puts together 50 quarrels per hour and, in the presence of an educator, reaches 12. "This happens because the quarrel is inherent in play, physical contact and is physiological - says Novara -. If a group of children, for example, plays with sand, after 3-4-5 minutes, something is triggered, a competition that the other opposes ”.

But children, if left alone, often have a great ability to find an agreement with other peers to keep the game going. “The child is an 'opportunist' and what really interests him is to continue playing, not to be excluded,” explains Novara.

When a child hits a peer, it is therefore essential not to blame him and not to interfere immediately with the attitude of a judge to establish 'how, where and why' the quarrel arose.

"Trying to correct these behaviors leads to disastrous results by wedging feelings of guilt," says Novara. If the child wants a toy, for example, she tries to just get it. And if a teammate hinders him in a game, he may think of giving a shove.

Two children at the park. At one point a fight begins and one of the two slaps the other. Typical scene today as yesterday. What has changed is what happens next. At one time, children were afraid of adults and were afraid of 'catching' them for a fight between them. So, they hid it and didn't ask for the parent's intervention. Thus they regulated each other, developing the skills to deal effectively with conflicts. That is: “If I beat the others, they exclude me from the game. Then I stop beating them so they let me play with them ".

Today this is no longer the case. Children are not afraid to show adults their instincts but parents are often too interventionist, thus preventing children from regulating themselves, Novara argues. Therefore, it is forbidden for the parent to 'get in the middle' and be the judge in the face of any clash between the child and friends, increasing, among other things, the real weight of the event.

The only concession: the parent (and the educator) can help the child to manage these episodes through a non-invasive approach that favors his ability to resolve conflicts 'on his own'. How? Novara suggests its 'Arguing well' method, which consists of two steps back and two steps forward.

THE MAJEUTICAL METHOD 'LITIGATE WELL' The primary goal of parents and educators remains to support children without influencing their self-regulation processes. Precisely from these premises, the pedagogist has devised the method 'Litigare bene' - known internationally. The method consists of two steps back and two steps forward.
1) The first step back is to give up the search for an alleged culprit ('Who did it?', How did it start? 'Are questions to avoid because they lead nowhere). 2) The second step back involves not imposing a solution with an interventionist attitude (stop it! ',' Play without arguing! ') That does not' enter 'the heart of the relationship between children. 3) The first step is to invite the child to tell her about what happened. At home, according to the pedagogist, it would be useful to create a special corner to do this, the 'carpet of bickering' (the 'compli corner'), where the parent accompanies the child to make him talk about the quarrel. A good practice is also to propose to the child to write or draw his version of the facts on a piece of paper. Of course, this method (already widely used among parents and schools) must be shared in the family, by mum and dad, otherwise it won't work. 4) Finally, the second step is to help the children find an agreement between them that they can also put in a box (or stop with a clothespin). If everyone has expressed her reasons, the 'neutral' adult has the task of showing how legitimate they are all. With this system, the parent should also learn an important lesson: “Every child just wants to play and it makes no sense to expect, for example, that at five years of age he has a sense of justice. And even asking him to be 'correct' is not useful ... In short, there is no possibility of creating ruminations with children ”, concludes Novara. Do the episodes repeat themselves too often? The ability to self-manage must be encouraged

We must not blame the child who beats, also argues Pellai. However, the child's capacity for self-management can / must be encouraged.

Let's take the case of a child who regularly beats his classmates in the classroom. To help him quit, you could ask for an interview with the teachers and define a 'pact' in front of him. “You will earn a smiley or five points to put on a table, for each day you have not hurt your teammates. Every day I will ask the teachers how you behaved ”.

"In this way the child will receive a positive motivation that favors his ability to self-manage," says Pellai. Even at home, nothing prevents you from adopting a similar system if the parent believes that quarrels between siblings, for example, or in the park, tend to be a little too 'handful'.

Another tactic suggested by Pellai: "If the child expresses his anger 'in an undeveloped way', faced with the concrete fact, the mother can ask him to repeat how things went, taking the hand he used to beat a other and looking at it together ".

“It is important to make you feel that there is a lot of power inside your hands but you can choose to use them for caresses, instead of hitting,” says the psychotherapist.

Therefore, when a child hits a partner, the parent should help him understand that he cannot afford to treat others badly. According to Pellai, it would also be useful to invite him to apologize in a concrete way, preparing, for example, a dessert for his partner.

Finally, faced with the most serious episodes, according to Pellai, the adult can carry out a strong 'containment' action. “If in the park, for example, the child doesn't stop hitting, the parent should tell him, 'then let's go home!' - says the psychologist doctor. And, in some cases, it is possible to evaluate the application of a sanction (understood as the loss of a privilege) as a direct consequence of the incident. "You're not watching TV tonight."

Magic, painting, photography, theater and much more. Here are many tricks and ideas to nurture children's artistic and literary talents

The idea behind the "Weapon of Choice" project, the choice of weapon, is to create a visual representation of the emotional damage that verbal insults can do.

TAG:
Why does the baby kick in the belly? ❯

add a comment of Why does the child hit others? Straight to parents