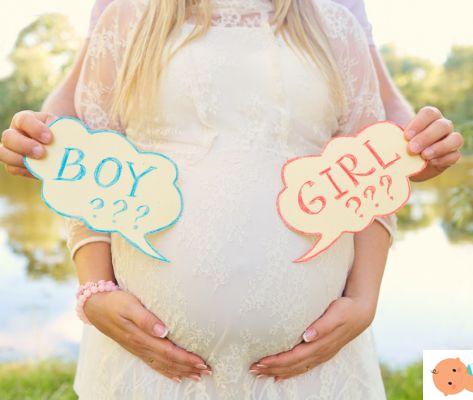 During the pregnancy, one of the most recurrent thoughts in the family of the unborn child concerns the sex. Des and empirical certainties have led in the past to develop methods of dubious rationality for preparing layettes and accessories for the newborn in advance. With the evolution of science and medicine, today we have tests that can give with sufficient certainty the answer on the sex of the child that will be born.

"However, it is important to underline that this element is not a priority and is not included in the main exams to be taken by the expectant mother, but it is a value that emerges among the others that tend to establish the health of the fetus", he explains. , professor of Gynecology and Obstetrics at the University of our city and director of the Maternal and Child Department of the Sacco Hospital.


identify the sex of the child

ultrasound of the first three months

In some pregnancies, in the presence of elements of risk, pathologies, advanced age of the puerpera, amniocentesis or CVS may be recommended. These investigations, which are carried out with the collection of amniotic fluid or with a placental biopsy, are invasive tests, often necessary. "Amniocentesis or CVS allow you to analyze the karyotype of the individual that is the set of his chromosomes which in normality are 46 of which 44 equal for man and woman while two differ precisely by determining the male (xy) or female (xx) sex. In the report of these exams the mystery of the sex of the child that is expected is therefore revealed, although the important results are certainly all the others, acts to avoid chromosomal alterations attributable to serious illnesses ".

Read also: 20 original cakes to reveal the sex of the unborn child

In the search for new methods to reassure parents, especially in anticipation of chromosomal diseases, «a new non-invasive test has been developed which, by taking maternal blood, extrapolates the fetal DNA. It is carried out after the tenth week and has a reliability percentage of 99 percent and, upon request, it also provides answers on sex».

Test tubes, laboratory tests so accurate and specific are badly connected with theories that have nothing scientific but that have proliferated in popular traditions so much that they leave traces of themselves even in the XNUMXst century. "These are legends, traditions that have never had scientific support or have never been demonstrated: there are no different responses of the organism of the pregnant woman with respect to the sex of the unborn child, neither with regard to the shape of the belly nor for the type of birthmarks that can come during pregnancy '.

Nothing scientific then, but the legends die hard, so one of the first things that expectant women do is the game of pendulum: just move a chain on your stomach with a wedding ring hanging on it. If the pendulum forms circles it means that she is expecting a boy, while if the faith moves from side to side, legend has it that a girl is on the way.

2. The belly: pointed or round?

One of the beliefs that has survived to this day concerns the mother's belly which can take on various shapes depending on the sex of the unborn child. According to the saying "pointy belly does not go to war", the pointed belly predicts the arrival of a girl who will not be drafted into the army, while a round belly is welcoming a boy. But to be honest, the tradition is not unique, given that in some areas the opposite rule is transmitted: pointed belly for the male, round for the female. In short, everyone sees what he wants to see.

Is mom's skin damaged with acne or blemishes? It will be said that she is expecting a girl. If, on the other hand, the skin is smoother and more luminous than usual, a boy may be on the way.

Another very ancient method is that of the Chinese calendar: a parchment discovered in a tomb of the Chinese royal family 700 years ago should predict the sex of the unborn child based on the month of conception according to the Chinese lunar calendar and the age of the pregnant woman.

5. The influence of the Moon

6. Craving for sweet or savory

Having cravings in pregnancy related to proteins, cheeses, salty foods and cured meats according to tradition indicates the expectation of a male. If, on the other hand, the mother especially wants sweet things and fruit, the baby will be female.

Finally, we should mention a study conducted in China by Canadian researchers, according to which to find out the sex of the baby one must look at the mother's blood pressure before conception, and in particular at the maximum. If it is higher than a certain threshold (above 109 mmHg) the chances of a blue ribbon would increase. However, these are studies that must be verified and deepened even in different populations, to exclude the involvement of some ethnic factor.


According to Dr. Saad Ramzi Ismail, the sex of the unborn child can be determined from the first ultrasound: if the placenta is located on the right side, it will be male, if on the left it will be female. However, this theory has no scientific value and his study has never been published in a medical journal.

TAG:
Will it be male or female? Here's how to find out ❯

add a comment of Will it be male or female? From science to popular beliefs