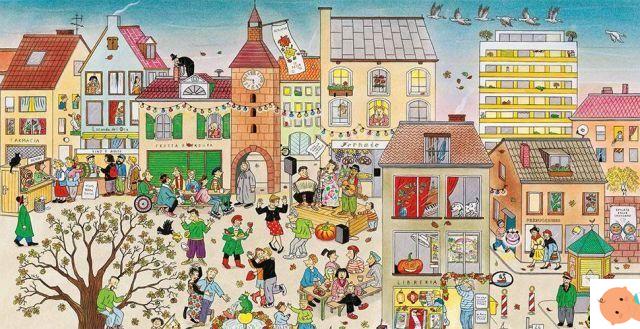 Many characters depicted on the same page, well-kept drawings and above all great attention to detail: these are the characteristics of the hidden object book, the teeming books designed for the little ones, which can also represent a fun reading for the older ones, as a stimulus to the imagination and creativity.

But what exactly is it about? "They are books made only of images, aimed mainly at children who either cannot read or have a linguistic culture different from that predominant in the country in which they are found", he explains. Raffaele Mantegazza, Professor of Intercultural Pedagogy at the University of our city-Bicocca.

And how are they different from Silent Books? "Characteristic of the Wimmelbuch is the presence of lots of characters and therefore children and parents, starting from the countless details depicted on the page, can invent one or more stories and link them together ".

Although it is not easy to establish exactly the birth of this literary-figurative genre, it is still a very ancient type of communication, similar to other categories such as graphic novel and comic, "in particular the author's comics which a long time ago proposed the predominance of images over text or stories of images only".

Arrived in Del Paese in about 2000, the Wimmelbuch have very valuable roots from an artistic point of view, with influences also drawn from Flemish painting e Central Europea: "For the wealth of details many review the representations of Hieronymus Bosch, for example the Triptych of the Garden of Earthly Delights, without the disquiet of the characters that sometimes crowd the Flemish artist's paintings. Closer to the genre is probably the painting Children's Games by Brueghel which is characterized by the presence of a multitude of characters and details, but within a less gloomy landscape ".

WIMMELBUCH, WHAT AGE TO READ THEM

When to start browsing these little works of art? "Books like that, although they are primarily intended for children, they can be read by anyone precisely because, like all art, they are very beautiful and interesting at any age. You can start leafing through them and reading them together even when the children are very young, without using them as a didactic tool, but only as a means through which they can spend time together having fun ".

PARENTS AND CHILDREN, HOW TO READ THE WIMMELBUCH TOGETHER

No special skills are required to read Wimmelbuch: it is something that all parents can do together with their children. The only thing that is needed is time. "A nice way to read them is to lie down together on the sofa and let your imagination run wild in the creation of stories about the characters, in an atmosphere of fun, joy and serenity. Above all, you can try to create the stories together trying to involve as much as possible the child, perhaps asking for example what he thinks that particular character is doing, what his name is, letting himself be carried away by what the images themselves suggest. Often even parents thus discover that they have a creativity that they may not know they had ".

Precisely for this peculiarity of the details, the Wimmelbuch: "They can be useful to develop theattention to detail artistic perception and also the cSkills in reading a picture, for example".

Read also: The first library, the first books to give to a newborn

Among the best known authors of this type of books there are certainly Stefanie Sonnentag and Max Walther, but also the English Martin Handford who created Where's Wally, that is, a type of Wimmelbuch in which the child has the task of identifying, in a multitude of figures, Wally, the famous character with the red and white striped shirt and big black goggles. To appreciate all the details of nature that changes with the passing of the months, there are "The books of the seasons" by Rotraut Susanne Berner, TopiPittori editions (the cover image is taken from "Spring").

WHERE IS WALLY, A KIND OF WIMMELBUCH

According to professor Mantegazza, however, Wally's case is different: "It is certainly a fun game that helps the child to develop visual skills, but you have to pay attention to don't limit yourself to just looking for the hidden character, otherwise the whole artistic and narrative dimension of the genre would be lost. Evolution, and someone has already begun to experiment with this possibility, will be to insert numbers and letters within the representations. Not necessarily with an exclusively didactic objective, but by mixing the two areas a bit. It is also true that both letters and numbers are made of a shape and color and therefore can also be pictorial elements, consistent with the characteristics of the Wimmelbuch genre ".

TAG:
Winnie The Pooh: history and curiosities of the most beloved bear by children ❯

add a comment of Wimmelbuch, books without words but rich in detail