Winnie The Pooh: history and curiosities of the most beloved bear by children 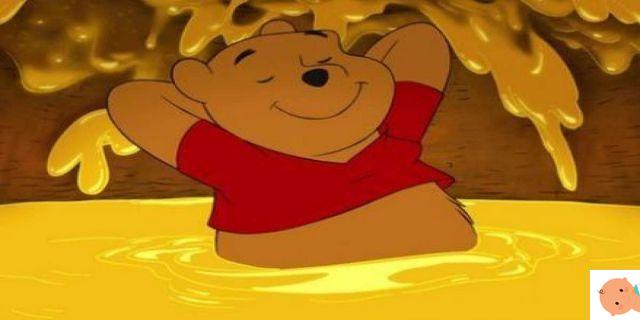 He is a tender teddy bear in a red shirt, a honey lover, with many friends and a large park. We are talking about Winnie The Pooh, the bear most loved by children around the world. But the Disney masterpiece is not just a figment of imagination. Come and discover the true story of Winnie The Pooh!

Read also: Return to the 100 Acre Wood: from 30 August to the cinema

The true story of Winnie The Pooh

In the small town of White River, Ontario, on August 24, 1914, a train loaded with soldiers arrived. The Lieutenant Harry Colebourn he stepped down the steps of his wagon onto the station platform when an unusual sight caught his attention: a black bear cub no more than seven months old on a leash held by a hunter trying to attract the attention of a buyer.

In the 27-year-old Canadian soldier, the hunter found the perfect client. Born in Birmingham, England, Colebourn has always loved animals. At the age of 18, he emigrated to Canada to study veterinary surgery. After graduating from Ontario Veterinary College in 1911, Colebourn settled in Winnipeg to find work in the Department of Agriculture. Days after World War I began, young Fort Garry Horse cavalry regiment veterinary officer was among the first to enlist and leave Winnipeg for military training camp in Valcartier, Quebec.

During the brief stop at White River, Colebourn picked up the bear in his arms as the hunter explained that he had killed his mother but could not do the same with the orphaned cub. The bear quickly captured the soldier's heart. The cavalry vet bought the cute puppy for $ 20 and was back on the train with his new pet, whom he named "Winnipeg" in homage to his hometown.

Winnie The Pooh: a true friendship

During the weeks that Colebourn spent training with other members of the Canadian Expeditionary Force in Valcartier, the bear, nicknamed "Winnie", proved to be a trusted companion. Harry trained Winnie with a reward of apples and a mixture of condensed milk and corn syrup. The puppy slept under her cot and followed him like a puppy. When he wasn't climbing the tent poles or playing with his owner, the bear posed for photographs with the soldiers and became the regimental mascot.

In early October, Colebourn boarded the SS Manitou military transport with Winnie in tow as it set sail for England for further instructions. After seven weeks of training on Salisbury Plain, the veterinary officer got the call to the Western Front. The trenches of France were hardly a place for a man, let alone a bear, so on December 9, 1914, Colebourn took Winnie to her new home at the London Zoo, which had just opened a new bear habitat that resembled a landscape. Mountain. Before parting ways, the soldier promised to take Winnie back to Canada once the war was over, which he hoped would be a matter of months.

Whenever Colebourn received a coveted license from the front, he visited Winnie at his new home. Though she had grown from cub to bear, she was as gentle as ever. Zoo keeper Ernest Sceales told a London newspaper in 1933 that Winnie was "the most docile and polite bear we've ever had at the zoo." The children were even allowed to enter the bear pit to ride on Winnie's back or feed her.

1918, Colebourn reunited with Winnie. Despite his promise at the start of the war, however, the soldier could not bring the black bear back to Canada. She knew that his pet no longer belonged to him, but to the people of London. After saying goodbye to Winnie for the last time, Colebourn returned to Winnipeg, where he continued to work for the Department of Agriculture and opened a small animal hospital in the back of his house.

The arrival of Christopher Robin

Among the London children who continued to be affected by Winnie for years to come was a little boy named Christopher Robin Milne who repeatedly begged his father, author AA Milne, to take him to the zoo where he fed spoons of milk. condensed to the friendly black bear between big furry hugs. Christopher Robin became so fond of the London Zoo's main attraction that he changed his teddy bear's name from "Edward" to "Winnie the Pooh", a fusion of the black bear's name and a nickname he had given to a swan he met every morning.

Winnie the Pooh and other Christopher Robin kindergarten plushes, including Piglet, Eeyore, Kanga, Roo, and Tigger, served as inspiration for his father's most famous tales. AA. Milne had been a prolific playwright, screenwriter, crime novelist, and contributor to the humor magazine Punch when he first brought to life the character of Winnie-the-Pooh in his 1924 children's poetry book, "When We Were Very Young." This was followed by the publication of an entire volume of stories, "Winnie-the-Pooh", in 1926. A sequel, "The House at Pooh Corner", was released two years later. Like Colebourn, Milne had served in World War I, and the idyllic setting of the 100-acre Woods was actually a reminder of the Western Front during the war.

When Winnie died in 1934 at the age of 20, her death made headlines around the world.

TAG:
Winter blues and children: what it is and how to fight the winter blues ❯

add a comment of Winnie The Pooh: history and curiosities of the most beloved bear by children