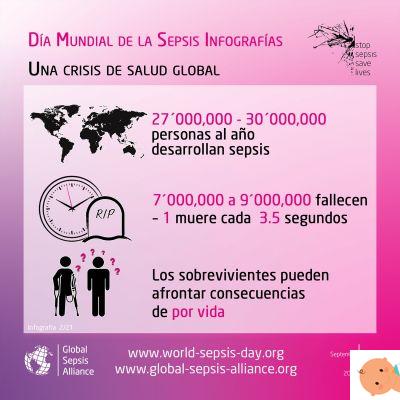 September 13th is the World sepsis day, the world day of sepsi, to remember the importance of a preventive or early intervention in the onset of infections, especially neonatal ones, which still affect a significant number of preterm babies (but not only).

La sepsi and the rare complication of an infection which, in severe cases, can lead to a damage to tissues and organs and therefore to the Multiorgan Dysfunction Syndrome (and therefore to the death). THE Infants, especially those born premature, are among the most affected, but not only: it is estimated that 700.000 cases of sepsis occur every year in Europe, of which at least 1 in 5 leads to death.

Newborns are particularly affected because of theirs immune system it is not yet developed and, since many infections are contracted in hospital (even in some cases during childbirth), it is essential to prevent or treat it promptly.

I preterm infants they are more likely to contract infections, because their immune system it is even less developed due to the shorter time spent inside the womb. Those born before 28 weeks or weighing less than 1.5kg are especially at risk.

La sepsi and the second cause of neonatal death among children born between 22 and 40 weeks, it is therefore important to raise awareness on the issue by spreading good clinical practices that are able to both prevent the onset of infections at birth and to resolve. In Del Paese, World Sepsis Day is promoted by Del Paesena Society of Neonatology, which through a SIN Guideline for the Prevention of Hospital Infections aims to provide a series of recommendations to standardize procedures throughout the national territory.

How sepsis is avoided

As we said, sepsis is one complication of an infection, often contracted in hospital, particularly in the case of Infants. This can happen at the time of passage into the vaginal canal - for example in the presence of bacteria such as Streptococcus B or Escherichia Coli, for which it is essential to carry out a vaginal-rectal swab to the expectant mother during pregnancy and possibly treat her with antibiotics - but even more often it happens after birth, due to the use of catheters, fans or for contact with virus.

Infections, resulting in sepsi, are in fact more common among preterm infants precisely because they often need interventions or support to continue growing outside the womb. It is essential to respect procedures that avoid the contamination and, if this happens, intervene promptly with the use of antibiotics, in the case of bacterial infections.

How to recognize sepsis in a newborn

I new parents they may be concerned about the possibility of the onset of infections e sepsi. Recognizing this state without a clinical evaluation can be difficult, but there are some signs that can lead you to suspect your child's health: apathy, loss of appetite, greyish complexion or significant alterations of the body temperature (too high or too low). It will then be up to the doctors to carry out, in addition to an analysis of the symptomatology, even specific tests: blood, urine or spinal cord, to identify the presence of viruses, bacteria or even fungi.

Once sepsis is confirmed, we intervene with antibiotics if it is a bacterial infection, but also with intravenous liquid supportive therapies, transfusions, breathing assistance also with ventilators, drugs to help blood pressure.

The 13th of September is celebrated all over the world Sepsis Day, which aims to sensitize medical and health personnel to prevent and act promptly in the event of sepsis, a complication that particularly affects premature babies who contract an infection.

TAG:
Laughter yoga in pregnancy, what it is and what are its benefits ❯