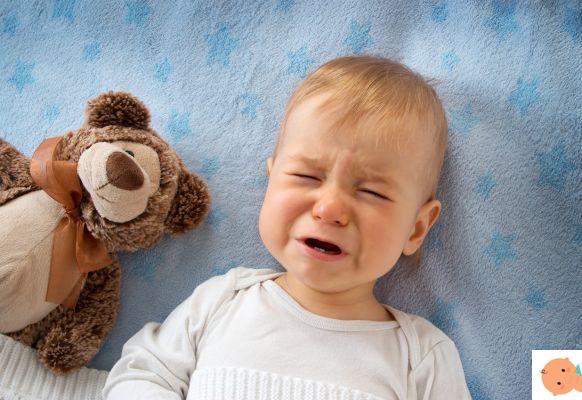 The baby has worms!

What they are and how they recognize each other

- pinworms they are tiny filiform animals belonging to the nematode group: whitish, no longer than one centimeter, very thin and difficult to see with the naked eye.

Tiny threadlike animals belonging to the nematode group: whitish, no longer than one centimeter, very thin and difficult to see with the naked eye. They are pinworms, the ...

Infestation with intestinal worms is very common: it is estimated that, in the world, 30-60% of children and adolescents are affected at least once by a pinworm infection and in the country this figure probably fluctuates between 25% and 50% of children. A very high percentage, which has to do with the widespread diffusion of these worms in the environment and with the relative ease of transmission. Hygienic conditions, on the other hand, have nothing to do with it.

The infection does not follow a particular seasonality: worms can be caught at any time of the year. The most affected are children in the kindergarten and primary school age group.

How they are transmitted

Worms, therefore, are widely present in the environment, where they are generally dispersed either by pets, such as dogs and cats, or by infected people. But how do you get infected? Simple: we become infected by ingesting the eggs of these organisms. Just touch an infected surface, put your hands to your mouth and that's it.

From the mouth the eggs move to the intestine, where they hatch: the pinworms are therefore intestinal parasites. From the intestine the females, especially at night, migrate towards the anus, where they lay their eggs, which then accumulate in this area. In girls, the eggs also travel to the vagina, causing inflammation of the external genitalia.

Of course, the wormed baby who puts his hands in his mouth after touching his bottom will continually re-infect himself. And if he touches sheets, towels or anything else with his hands, he ends up spreading the infection around. Here because environments such as kindergartens and schools facilitate the spread of the infection.

The most common symptoms

Worms are very rarely seen, but it is difficult for the affected child to go unnoticed. The most obvious symptom is itching, so the child often scratches his butt or, if it's a girl, also the vulvar area. If this itch lasts more than two consecutive days, the baby is likely to have worms. Sometimes, others add to itching less specific symptoms, such as stomach pain, a general feeling of agitation and discomfort, difficulty sleeping well.

Beyond the annoyance, which however is significant and increases as the days go by, the infection has no more important consequencesyou.

Tiny threadlike animals belonging to the nematode group: whitish, no longer than one centimeter, very thin and difficult to see with the naked eye. They are pinworms, the ...

Sometimes direct observation is enough: sometimes it is in fact possible to observe pinworms in the stool, in the underwear or in the area around the anus.

If you can't see anything but you still have a question of a pinworm infestation, a very simple test called tape test, because it involves the use of a piece of adhesive tape. In addition to scotch tape, you need to get 3/4 microscope slides: you can buy them at a pharmacy or ask a medical analysis laboratory.

The procedure is very simple: in the morning, as soon as the baby is awake and before washing his butt, a 5-6 cm piece of scotch tape is applied to the anus, leaving it in place for about 5 minutes. Then the tape is glued onto a slide, making it adhere well. The procedure should be repeated for three mornings, keeping the slides at room temperature. At the end, the slides are taken to a medical analysis laboratory: a simple observation under the microscope will allow to verify if there are eggs or not. Virtually all laboratories should perform this test, but it is still safer to make sure first, even with a phone call.

A warning about the procedure: always wash your hands very well after gluing the scotch tape on the adhesive tape, because eggs are very infectious!

Treatment and care of the environments

If the child has worms, the therapy to cure him is very simple. However, it is important that it is done correctly, otherwise these animals will not be eradicated.

The therapy if you base your a antiparasitic drug that must be taken by mouth in two doses: one at the time of diagnosis and one fifteen days later. The fundamental aspect of therapy, however, is that not only the affected child does it, but all family members, including grandparents if they live at home. And that they do it exactly on the same days as the child does.

The other important step is the disinfestation of the house, to be performed immediately after taking the first tablet of medication: if you wait a few days it does not work well and there is a risk of new infections. Nothing extreme is needed for pest control: just wash in the washing machine at 60 ° C underwear, bed linen (sheets, duvet covers ...) and towels and throw away any sponges used for washing.

Even if the infection has been eradicated, it can still be resumed in the future.

Lice, worms and other parasites: how to clean the house if there are children

Not just pinworms, the other parasites

Pinworms are definitely i most common worms that can infect our babies. There are also others, which are however much less common and - unlike pinworms - are more linked to the hygienic-sanitary conditions in which the child lives.

It is about others intestinal parasites such as:

They are not very common in the Western world, but some infections can happen. In any case, the most affected by us are mainly migrant children, who come from areas of the world where these intestinal parasites are still very frequent.

Pinworms are intestinal parasites belonging to the nematode group.

How are pinworms transmitted?

Children are infected by ingesting the eggs of these organisms: just touch an infected surface and put your hands to your mouth.

TAG:
Worms in the feces of the child: what to do? ❯