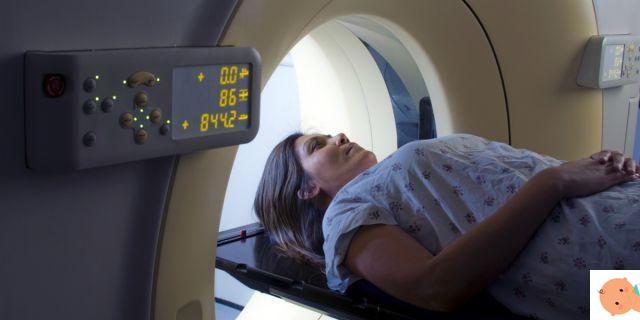 It is risky to undergo radiological and magnetic resonance examinations during pregnancy? We talk about it with Lorenzo Bianchi, Regional Coordinator of the Associazione Del Paesena Medical Physics of Lombardy and Head of the Complex Structure of Health Physics at the Circolo Hospital, Busto Arsizio (MI).

X-rays and CT scans in pregnancy

The international radiation protection committee, which is the worldwide body appointed to establish the safety threshold in terms of radiation, states that the threshold of danger during pregnancy reaches over 100 milligray (acronym mGy, which is the unit measurement that indicates the absorbed radiation dose), i.e. a dose that requires at least 3-4 scans or 10-20 x-rays at the abdominal or lumbar level, which therefore directly affect the fetus.

If, on the other hand, the radiation dose to which a pregnant woman is exposed is less than 100 mGy, the probability of abortion or malformations remains 3%, which is the percentage common to the entire population of pregnant women.

Greater caution in the first trimester of pregnancy

The most delicate period, in which radiation can be dangerous even at lower dosages, are the first weeks of gestation, when the embryo is implanted and organs are formed and when it can happen that the woman undergoes certain tests' a lighthearted 'because she doesn't know she's pregnant yet.

"At this stage the so-called all-or-nothing rule applies" underlines Lorenzo Bianchi: "that is, the effect of radiation can manifest itself, directly causing a spontaneous abortion, or not, and in this case the pregnancy continues without problems. as the months go by, the risk of fetal problems decreases more and more.

If the X-ray or CT scan is done in areas far from the belly, such as a leg, an arm or a panoramic view of the teeth, the dose of radiation that reaches the fetus is really negligible, so there is no danger.

Same goes for mammography, in which radiation reaches only the breast.

In any case, with the current digital radiology it is possible to adjust the equipment and obtain radiological images perfectly suited to the required diagnosis, with much lower radiation doses than the traditional plate. In addition, even if nearby areas such as the chest are irradiated, the radiation field can be closed so as not to reach the abdomen and therefore the fetus.

The expert points out that the risk is low but it does not mean that x-rays and CT scans can be done lightly during pregnancy. Article 10 of decree 187 of 2000 is clear: before requiring a radiological examination to a woman of childbearing age, it is checked whether the woman could be pregnant; if yes, it is assessed whether it is really necessary to do the examination or it can be postponed until after pregnancy, if alternative tests are possible, such as ultrasound, if an X-ray examination has been recently carried out which can provide the information what you are looking for. In short, even if the risk is negligible, this is not the case, if there is no real need. Finally, in the event that the examination cannot be postponed, the radiologist informs the patient of the associated risks and ensures that exposure is reduced to the minimum necessary.

Ok after informing the radiologist of the pregnancy

Magnetic resonance does not give off ionizing radiation, like X-rays, but uses magnetic fields (measured in Tesla) that allow you to obtain images with certain sequences.

"The scientific literature says that there is no evidence of teratogenicity, that is, of damage to the fetus, if you work with magnets below 2 Tesla (and the vast majority of equipment is below this threshold), using standard sequences, even if the fetus is in the investigated area "says Lorenzo Bianchi.

In any case, the radiologist must always be informed of the woman's pregnancy.

Better to avoid it, however, in the first trimester of pregnancy

Although there is no scientific evidence of harm to the baby, as a precaution the law does not recommend MRI in the first trimester, because the magnetic fields could heat the tissues and cause the fetal temperature to rise beyond the safe threshold.

No problems while breastfeeding

Both radiological examinations and magnetic resonance imaging can be performed without problems during breastfeeding, since the mother's milk is not affected by the radiation received.

On the other hand, nuclear medicine investigations (eg scintigraphies) should be avoided, since the administered radiopharmaceutical can contaminate breast milk.

add a comment of X-rays, CT scans and magnetic resonance in pregnancy